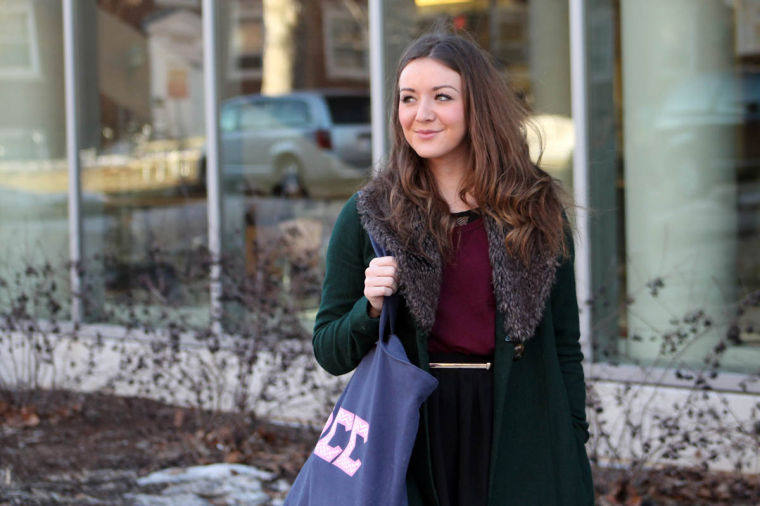 With her long auburn hair falling loosely over the shoulders of her petite 5’5” frame, pink lipstick and black mascara subtly highlighting her features, Lee Ramsay, founding member of the University’s chapter of Phi Sigma Sigma, may not strike the common observer as a standout basketball player or a future pilot. She is both.

Ramsay, junior in Engineering, came to campus last fall as a study abroad student from Glasgow University in Scotland. Some might mistake her university in Scotland for Hogwarts, as Harry Potter’s first flying scene was filmed on its grounds. Here at the University, Ramsay herself has flown over campus — not on a broomstick like Harry — but in a plane.

Her fascination with aviation started at a young age, when her dad would take her to the airport at night to watch the planes take off.

When it came time to apply for colleges, her mother handed her a list of prospective majors offered at Glasgow, and Ramsay said her eyes went straight the second major on the alphabetized list: Aeronautical Engineering.

In addition to her studies here at the University, Ramsay is taking aviation lessons at University of Illinois Willard Airport in pursuit of her private pilot’s license. One day, Ramsay also hopes to obtain a commercial pilot’s license, but not with the goal of being a commercial pilot — she said she would like to fly for her own personal adventures.

Ramsay is also spending her time building a small plane with the registered student organization Student Aircraft Builders.  The group has a hangar at Willard, where the finished plane will eventually reside. She and the rest of the students have been working on it for the majority of this year, and they hope to have it flyable by the end of the year.

Back home in Scotland, Ramsay is just as busy as she is here. She plays basketball for three separate teams: the University of Glasgow, the city of Glasgow, and the under 21 division of the Scottish Women’s National League.  On weekends, she travels across Europe playing teams such as Spain, France and England. She plans on trying out for the over 21 division when she returns to Scotland. After that, she said, the next step would be trying out for the Great British team, which is the team that goes to the Olympics.

Ramsay, however, said she does not foresee trying out for the Olympic team, because now that she is in college she wants to focus on her degree.

Matt Kosky, junior in Engineering, occasionally plays pickup basketball games with Lee and is in some of her classes. He said her enthusiasm transfers from the classroom to the court.

“There wasn’t a second when I wasn’t completely covered, even though I have about seven inches on her. She beat me for about every loose ball or rebound,” Kosky said.

Being at the University of Illinois, Ramsay said, has especially been an eye opener.

“Here, as opposed to back home, it feels like there are so many more options, and it feels like there’s not anything standing in your way — that no matter how big the company is, if you work hard enough, you’ll get there,” she said.

Ramsay said she has also been especially impressed with the drive of her fellow students at the University. She specifically references the founder of Student Aircraft Builders, junior in Engineering Eric Lopez, who has been interning for NASA for the past three years.

“Students our age just don’t do those kinds of things back home,” Ramsay said. “The way American students seem to balance their time here is so impressive, and all the things they seem to juggle, it motivates me to do more and get involved in more.”

One of her favorite aspects of going to school in the United States is being able to catch an NBA game at a normal time, because back at home, she said she and her dad would stay up until 3 a.m. just to catch a game.

Before coming to the United States, Ramsay said she had “no clue what sorority was.”

“All I knew was what I had learned from watching ‘American Pie,’” she said.

Nonetheless, one day while walking on the Quad, she saw a booth for Phi Sigma Sigma, and went over intending to pick up a flyer for her friend Alana Gleason, freshman in Media, who was interested in the sorority.

Within five minutes of talking to the girls, Ramsay said she was signed up to come to their recruitment events. Both Gleason and Ramsay ended up joining Phi Sigma Sigma, and Ramsay said her experience here on campus would not have been half the same if she had not joined.

Extension consultant for the sorority, Sayeh Saidi, who Ramsay said was influential in convincing her to join, said it is Ramsay’s personable nature that makes her unique—she can get along with anyone and everyone.

“I remember seeing her on the Quad, and she just has this ray of positive energy that is so infectious, and I said ‘This girl has to be one of the founding members of Phi Sigma Sigma, she has to be,’” Saidi said.

“What I love about Lee is that she knows she only has one year here, and she’s trying to make the most of it. Whenever we have our long chapter meetings, Lee sits through them with a smile on her face when everyone else is sleeping — I think that’s great,” Saidi laughed.

Ramsay said part of the motivation for being so involved comes back to her drive to never say ‘no’ to anything.

“Fill up your time with as much as you can, meet as many people as you can — just go out there and submerge yourself with their culture and the way they do things,” she said.

Although she will be going home to Scotland after this semester, Ramsay said she hopes to return to the United States in the future.