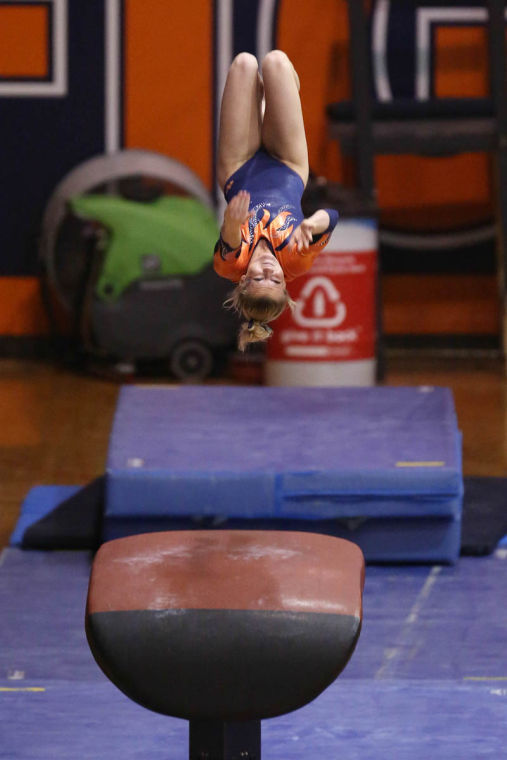 Illinois Amber See preforms her Vault routine during the meet against Ohio State and Central Michigan at Huff Hall, on Sunday, Feb. 23. The Illini recorded a score of 196.775.

The Illinois women’s gymnastics team grabbed two wins over the weekend. It began with a win at Friday’s State of Illinois Classic in Normal, Ill. Then, the Illini returned home Sunday and scored 196.775 to defeat Central Michigan and Ohio State.

The first-place finish at the Classic was Illinois’ seventh straight at that specific competition. It achieved the victory by defeating Illinois State, Northern Illinois and UIC with a score of 195.825. It also marked Illinois’ first win in three weeks. What’s more impressive, though, is the history Illinois made Friday.

Vault, a weaker event for the Illini, was their third event at the competition. On the apparatus, the team combined for a 49.425, which set an all-time Illinois program record for the highest score achieved on vault.

“We’ve been working really hard on vault,” head coach Kim Landrus said. “And it was just so rewarding to see everything come together tonight and put up some really dynamic vaults that were some of the best that I’ve ever seen from the Illinois team.”

Senior Amber See highlighted both vault and the meet overall by scoring a perfect 10. Landrus described See’s vault as “the best vault I’ve ever seen her do.” This made her the third Illini women’s gymnast ever to do this.

Freshman Mary Jane Horth also made her lineup debut on the uneven bars, where she earned a team-high 9.875. This was enough to get her second place.

“It was an awesome feeling to get back out there again and know that my team was behind me supporting me all the way,” Horth said. “It was just really exciting, and I’m so happy that I was able to do that.”

Despite the victory, Illinois was not pleased with its performance. There were mishaps on beam and bars, and the Illini were hoping for a higher score; however, Landrus pointed out that the team competing Sunday would give it another chance to perform and correct its mistakes.

“We did some really great things, but we also had things that we needed to work on,” Landrus said of the Classic. “And the challenge was to come back two days later and correct the things that went wrong. And I really think they pulled together and did exactly that.”

For Sunday’s tri-meet, a start on vault left Illinois behind after the first rotation. It was yet another meet in which vault was the lone score under a 49, but the Illini were able to overcome that. They gained the lead on bars, where they had four stuck landings. Another four stuck landings on beam helped the Illini maintain it. A strong finish on floor sealed the win with a 49.275. The highest team score of the meet for Illinois, though, came on beam, where the gymnasts totaled a new season high of 49.300.

“Beam was a totally different performance than it was on Friday, and so I really think they stepped up to the challenge,” Landrus said.

While beam was the best event of the meet for Illinois, an Illini did not take the beam title at the tri-meet. In fact, the Illini only earned two individual titles. Kato scored a 9.900 on bars while See tied her career high on floor with a 9.950. Those scores were just two of the 18 scores at or above a 9.800.

Illinois’ 196.775 was also a new season high, which urged Landrus to emphasize the value of momentum.

“It’s to the point now where that every meet is a challenge itself to just get a little bit better,” Landrus said.