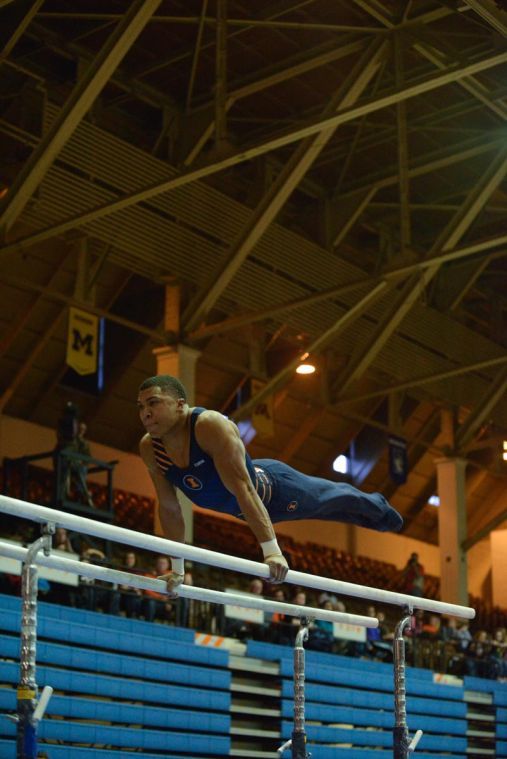 None of the five Illinois men’s gymnasts who traveled to last weekend’s Winter Cup qualified for a spot on the U.S. national team. Only three Illini managed to reach event finals.

Freshman Chandler Eggleston, sophomore C.J. Maestas and junior Mike Wilner qualified for the finals on Saturday, despite subpar performances on the first day. In a preliminary that totalled gymnasts’ points to determine who made it to finals, the most unlikely Illini to make it was Wilner, who only competed in two events.

Wilner would have needed to place either first or second on rings and floor in all four rounds of the event to qualify for the national team.

On the other hand, Maestas and Eggleston had much better chances of making the team heading into finals; however, both were unsuccessful, despite putting together solid routines.

“I hit all of my routines, I didn’t fall, which was a big step in the right direction this year,” Eggleston said.

Maestas, who was a favorite after making the national team two years ago, fell just short by only two points. He finished third on both rings and floor with combined scores of 30.550 and 30.400, respectively. Maestas added a 10th-place finish in the overall with a 169.600.

“If C.J. had done any number of a hundred things slightly better, he would have moved up a couple spaces,” head coach Justin Spring said. “And so it was really frustrating.”

Spring said the biggest issue for Maestas during the Winter Cup was his lack of performance time this season, having only competing in the all-around four times before last weekend’s event following a season-ending injury last season.

“He came back from this 18-month, devastating, potentially career-ending injury on his elbow … and that’s the last most of the U.S. national committee has seen of him,” Spring said.

Even though the Illini didn’t accomplish their goals at the Winter Cup, they came back happy with what they accomplished and ready to improve heading into the NCAA championships.

Spring emphasized how strong of an attitude the Illini competitors had throughout the event, even when they were not performing up to par.

From here on out, Illinois’ sole focus is improving their routines to help make a deep push at the end of the year.