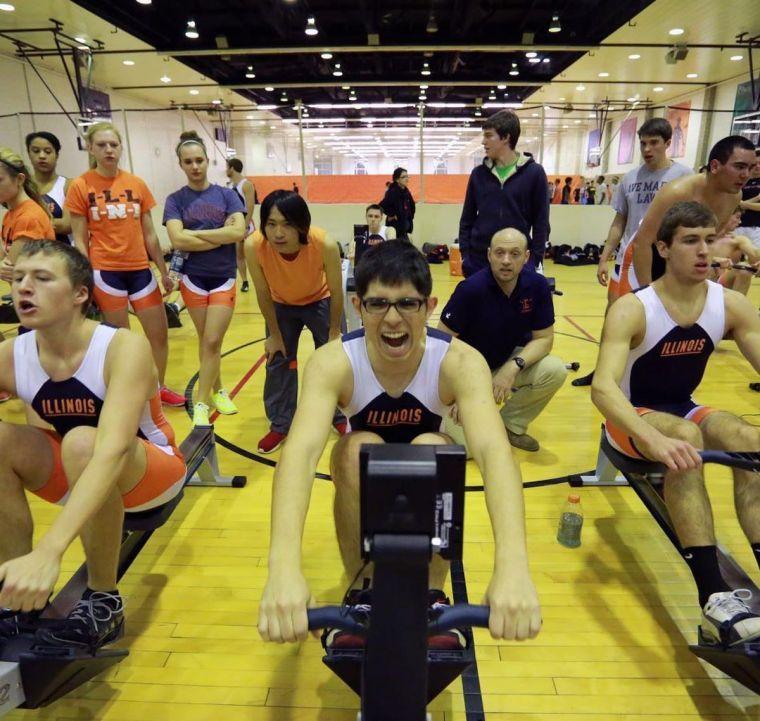 Lucas Gonzalez, a sophomore in Engineering, races a 2k race against other Illinois’ Rowing athletes at the Illini indoor on Feb. 2, 2013 at the ARC gym.

Its introduction speaks for itself: “Anything you’ve ever seen anyone do on an erg at the gym, they’re probably doing it wrong, so forget that.”

Junior Katie Ruhl recalled her coaches telling her this on the first day of club rowing tryouts. Called so by rowers, the “erg” is the indoor rowing machine athletes use to train and also compete on. But its popularity has transitioned the erg to the hands of the average gym rat, a rather poor one, according to how the Illinois men’s and women’s rowing team’s coaching staff introduces the machine to prospective rowers.

With dedicated morning practices five days a week, the teams have managed to perfect its skills on the erg and closed out the 16th annual Chicago Indoor Rowing Championship (CIRC) on Saturday with five first place gold finishes and two tournament records.

So when it comes to first learning how to use the machine and then taking those skills over to the water, junior Katie Ruhl knows a little something. A novice, she joined the rowing team only this year after being approached as freshman at the ARC by members of the team who yelled, “Hey! You look like you can row.”

Two years later, Ruhl realized she needed a workout schedule and something that would physically push her to become a more well-rounded individual. And that’s where she originally used the erg on that first day of practice after ignoring it all that time before.

“You literally are like blank slate, watch exactly what they are doing,” Ruhl said. “So then you get on and you feel super robotic and you try to do what they are saying, but you don’t have any type of flow.”

About six months later, Ruhl has found the flow and was one of the first place gold finishers this past weekend.

CIRC consisted of individual rowers racing 2,000 meters on indoor rowing machines and a 5×500 team relay race that concluded the day. A competition that brings together teams from across the Midwest, Illinois competed against Big Ten rivals such as Northwestern, Purdue, and Michigan State, among others.

The Illini took four individual golds and then went on to win gold in the men’s open 5×500 relay. The men’s open relay team had slower individual times coming into the competition than Purdue and Michigan State, thus surprising the crowd when it won.

“For me personally, I get a lot more anxious and nervous for indoor competitions,” Ruhl said. “You’re able to see the screen and know exactly where you stand in the race at all times. There is no guessing.”

But both Geertson and Ruhl finished the indoor season undefeated after winning gold at the Indianapolis and Illini Indoor Rowing Championships. Using the Illini Indoor on Feb. 8 as a showcase for the upcoming spring season, Illinois competed against each other in a 2,000 rowing machine battle. Illinois won three golds on Jan. 25 at the Indianapolis Indoor Rowing Championships. The feat was an entire season in the making.

“As far as the training aspect goes, it is really a culmination of everything they’ve done,” head coach Erik Kroeker said. “It’s one last opportunity to see how far they’ve gone. It’s really a great preseason preview of what we’re going to see when we’re out on the water. You really do see how powerful the competition is.”

With the indoor season over, the Illini are looking to get back on the water after a successful fall season. The novice women’s team went undefeated against club varsity teams and the novice men’s team took gold at the Quad Cities Classic for the second year in a row, while taking bronze at the Head of the Rock. The women’s four-plus team finished 15th at the Head of the Charles Regatta in Boston, which earned them a coveted guarantee entry in the 50th anniversary race next year.

The Illinois rowing teams will return to the water soon in preparation for their first water races of the spring season set for March 29 at the John Hunter Regatta in Gainesville, Ga.

“I think we’re going to have some of the strongest competitions this year,” said senior Chris Marr, who competed in men’s collegiate open relay as an individual and the men’s collegiate relay team which took gold. “We all have this kind of the attitude that usually doesn’t come about in a team until the final weeks before big competitions. But we kind of already have this attitude of working together and trying to be as fast possible.”