CU on Board provides outlet for artistic expression 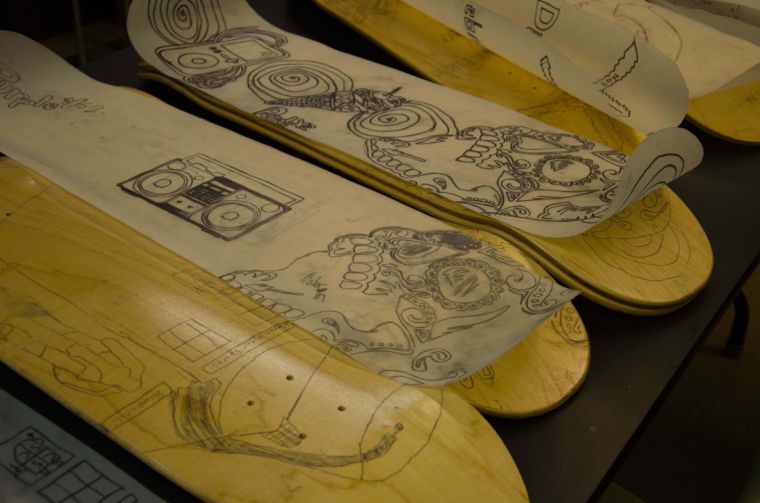 This semester, local students at Edison Middle School in Champaign can take their artistic creativity and put it all on the table — or, rather, the skateboard deck — as part of CU on Board, a community-based art initiative.

The project, part of an art after-school program called “artspeak,” lets middle school kids design skateboard decks in preparation for a series of art shows in April and May. The students meet after school in two sections at Edison Middle School and the I.D.E.A. Store once a week.

But these are not just any skateboards. The board decks are collected through donations from people around the community, so each board has its own unique past.

“A lot of the (donated boards) that we have already just have a nice history to them,” said Kelly White, executive director of 40 North, which is the Champaign County Arts Council. “You can see how the person already had decorated it, and obviously it’s got scuffs and … I think it’s kind of interesting for (the kids) to work on top of that.”

Emily Denis is one of two art instructors for artspeak, and she talked about how the CU on Board program has progressed since its inception in January.

“I had a designer come in (to the classroom), and he talked about what it means to brand yourself and how graphic design can be like an identity,” said Denis, who is also a master’s student in art education. “The kids talked about what their logo would be if they had their own brand, and what images and colors and ideas represent who they are.”

CU on Board and artspeak are projects of 40 North, with support from the Lumpkin Family Foundation, Edison Middle School, the I.D.E.A. Store, the Champaign Public Library and the University of Illinois Art Education Department.

“(CU on Board) has engaged the students and made the (art) process relevant to them,” wrote Gail Rost, general manager of the I.D.E.A. Store, in an email. “It has captured their imagination and I feel their energy when I am observing.”

“Middle school is kind of an age where you’re starting to create your own identity, and (learn) how to express who you are,” she said. “And sometimes art is one of the best ways for kids to learn how to do that.”

CU on Board has been in the works for several years before it was ultimately put in place this spring semester. With 40 North and artspeak, Denis has finally found an outlet to carry out her artistic project which began as a lingering idea.

Both the artspeak after-school program and CU on Board were products of numerous events falling into place, White explained.

“A lot of kids in Edison (Middle School) after school (would) go to the library before parents can pick them up,” she said. “So it was a lot of kids at the library with a lot of unstructured time.”

In addition, the school’s art classes are limited to only part of the year for some grades, so students did not receive as many opportunities for creative expression at school.

“So the combination of their limited access to art and then also this unstructured time they were having after school, we thought that might be the perfect opportunity to create an after-school program,” White said.

Then, 40 North applied for a grant from the Lumpkin Family Foundation during fall 2013 and received enough funding for one school year of after-school art classes at Edison. With that medium set in place, Denis could then implement her CU on Board project, which is currently underway.

But White and Denis said they wanted to extend the project’s inspiration to the entire community, not just to the students at Edison.

“We’re hoping to engage some other children to create (their own skateboard decks) before the Boneyard Arts Festival, which will happen (between) April 10th and 13th,” Denis said. “Then, (40 North) will still be seeking out people who want to be a part of it, because then there will be another final display in May, which can involve kids as well as local artists in the community.”

During the Boneyard Art Festival, the children’s and community members’ skateboard art will be exhibited at Downtown Urbana’s [co][lab] art center.

Though the funding for artspeak is currently only for one school year and one school, 40 North and the I.D.E.A. Store are hoping to collaborate further in the future. Ideally, they would like to come up with more community-engaging projects such as CU on Board.

Until then, 40 North is accepting skateboard deck donations of all types to involve as many other CU community members as possible.

“CU on Board is a great example of bringing together youth, the community and art in a fun, meaningful way,” Rost said. “This is a wonderfully fresh approach to coaching kids to explore their inner selves through artistic expression.”