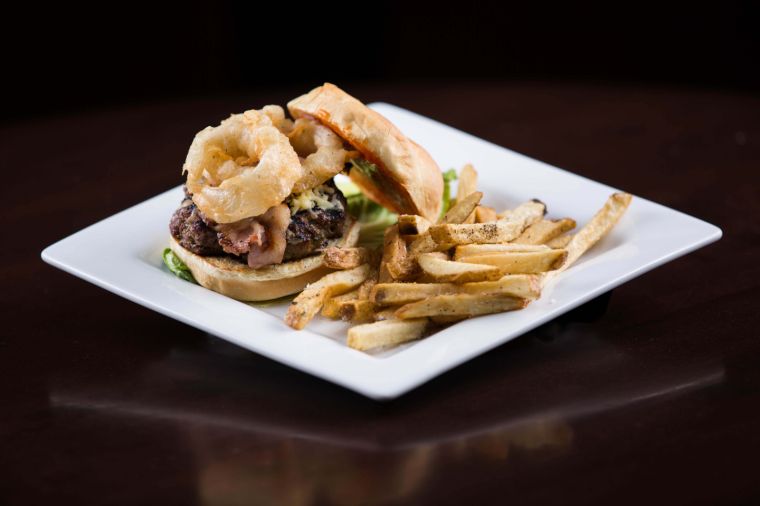 While walking down Neil Street in downtown Champaign, I could see a diverse mix of eclectic restaurants and shops. Hidden among the many eateries is an Irish gem: Dublin O’Neil’s. The Irish pub and grill may appear small from the curb, but it makes up for its meager size on the inside, with its open, exposed floor plan, warm and inviting atmosphere and a menu that’s sure to meet the expectations of even the most sensitive taste buds.

A dish that had an abundance of flavors and textures, and was truly satisfying to the palate, was The Pub Burger, one of Dublin O’Neil’s better known dishes. It was presented on a large square plate and placed in the middle alongside freshly made sweet potato chips, an option that is definitely worth trying.

The tender hand-patted burger is topped with a juicy slice of ham (bacon), Irish cheddar cheese, onion rings and curried ketchup (that can be ordered on the side). The combination of flavors and textures brings the burger together and creates an entrée that anyone could enjoy.

Getting a table at this restaurant on a Thursday night was fairly simple — my three friends and I were seated right away. The service matched the restaurant perfectly; our server was warm, welcoming and efficient. When asked, she gave us her honest opinion about menu items; she even recommended different types of beer that would be enjoyable with each entrée.

When asked about their most popular items, she listed the Pub Burger, fish and chips and their shepherd’s pie. She went on to explain each entree; they all sounded appetizing, but the pub burger stood out.

“Once she said onion rings, I knew I had to have this burger,” said Anna Cichowski, junior at Eastern Illinois University. “Most places that have onion rings on their burgers don’t get them crispy enough.”

After eating, Cichowski noted that the Pub Burger’s onion rings were the perfect texture and the flavors melded well together.

Alyssa Lies, junior in Media, said she has tried burgers from many different restaurants in Champaign, but found the Pub Burger was one of the best burgers that she had in a while — not just because of the flavors of the added ingredients, but because the burger was seasoned and grilled to perfection.

Another aspect that most people can overlook when ordering food is the side. With the burger that I ordered, I chose the sweet potato chips, while the other members of my party tried Dublin O’Neil’s hand-cut chips (really French fries). However, they were very delicious, and had a crispy exterior and warm potato-y goodness on the inside. It brought the entire entrée together.

Reasonably priced and not that far out of the way, Dublin O’Neil’s is worth the visit. Located right in Champaign, it’s a great way to get a taste of Ireland.

Raymond is a junior in Media. He can be reached at [email protected]

Editor’s note: A previous version of this article misspelled palate as pallet. The Daily Illini regrets the error.