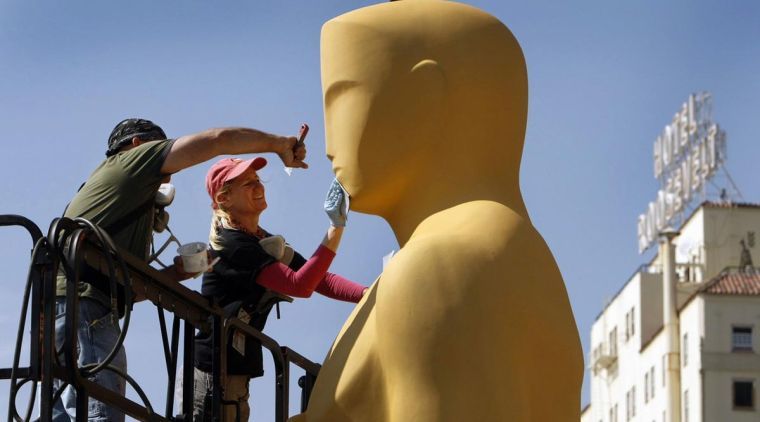 Lead scenic artist Dena D’Angelo, right, with scenic artist Rick Roberts use sand paper to prepare the giant Oscar statue for gold paint before he is loaded to the red carpet outside the Dolby Theater at Hollywood and Highland on  Feb. 25 for the Oscars which will be televised live this Sunday, March 2.

On Sunday, an average of 40.3 million Americans will gather around their television sets to view the Academy Awards, the biggest film award spectacle in history.

But as the ceremony goes on, many often tune out when the host announces the nominees in an arguably underrated category: Foreign Film.

Michael Duong, foreign film buff and freshman in Engineering, is not a typical Oscars viewer. Duong has a different practice when it comes to this American film ceremony. He pays attention to international press feeds — mostly stemming from BBC news — on information about Oscar contenders because in his opinion, most Oscars news originating in the U.S. focuses around mostly American films or actors. Among family and friends, Duong tends to be the most knowledgeable person in the room when it comes to the category of Best Foreign Film. In other words, Duong is the one in every 200 people that will go to an American theater to watch a foreign film.

In 1961, Federico Fellini’s “La Dolce Vita,” the highest grossing foreign language film of all time, earned $19.5 million in U.S. theaters, which amounts to $236 million in today’s dollars. In 2001, “Crouching Tiger Hidden Dragon” earned $128 million while in the box office, about $190 million in adjusted dollars to reflect today’s economy. The foreign-language films released in 2013 earned about $23.7 million all together in U.S. box offices. The issue being addressed is that of the dying consumption of foreign film in the United States.

Rushing specializes in 19th and 20th century Italian cinema and pop culture. He teaches Introduction to Italian Cinema almost every semester and has written multiple journal articles on cinema studies topics, ranging from Italian neorealism to Italian critics on the work of Charlie Chaplin.

“We have a distribution system that doesn’t bring products from elsewhere, unless we are really convinced that they will make a humongous amount of profit,” Rushing said.

One of this year’s top contenders in the Best Foreign Film category, “La Grande Belezza (The Great Beauty)” by Paolo Sorrentino, has managed to earn a little over $2 million in gross ticket sales from U.S. screenings. The film follows Jep Gambardella, an Italian writer and journalist, around the lavish lifestyle that characterizes the upper middle class of Rome; it centers around the deteriorating culture of Italians within the city, only to reveal the great beauty of art and poetry that lies beneath all the gritty superficiality of the people of Rome. This film has received much praise from various critics around the U.S. and is often compared to Fellini’s “La Dolce Vita,” yet has only received 0.8 percent of the earnings Fellini received with his film.

“It’s mainly a problem, for many viewers, that (they) don’t even know (a film) existed,” Rushing said.

Duong, an avid viewer of foreign cinema, shared that he has seen “The Missing Picture,” this year’s Cambodian entry for the category of Best Foreign Film. A medley of narration, old news footage and clay figurine acting, this film is Rithy Panh’s retelling of what happened in Cambodia after Pol Pot came to power in the 1960s.

“By paying attention to the different developments in foreign cinema, American audiences are exposed to numerous cultural and even some historical issues all over the world,” Duong said. “Another reason … is also to get in touch with one’s cultural roots… (Foreign) movies often reflect the humanistic values shared across nearly all cultures.”

Although Hollywood produces quality movies for American cinema, the question that has not been answered is, in short, why should American communities care about foreign cinema?

The U.S. is a nation of immigrants, Smith said, so as a people of different heritages, good comes from hearing other languages in film in terms of empathizing with ancestral cultures. Smith said he believes that while watching a foreign film, the viewer expects to see something they have not already seen, and consequentially this experience tends to refresh the typical film viewer.

“I think there’s a good chance that you’ll see a kind of story that you don’t usually see. You’re going to get something outside of your usual diet,“ Smith said.

Rushing brings a different perspective to the table. Even if the movie is in a different language, there are still qualities that allow any viewer to identify with the film.

“When a film like ‘Crouching Tiger Hidden Dragon’ comes along, people, it turns out, will go and see a really gorgeous, really well made, totally emotionally engaging, two-and-a-half-hour movie, even if its in Mandarin Chinese and subtitles,” Rushing said.

Rushing said he believes the same goes for a movie like “La Grande Belezza.” When pointing out that most of the film is music and dancing, Rushing identified these elements as cultural modes that people of all different nations can identify with and enjoy within cinema as entertainment. When made right, Rushing believes that a movie can appeal to any audience, no matter what language it is in.

“The more non-linguistic it is, the more sound it has, the more that people who don’t necessarily speak the language of the film can identify with foreign cinema,” Rushing said.

Specialized theatres like Champaign’s Art Theater and Virginia Theatre allow small American communities such as Champaign-Urbana to become exposed to foreign cinema as they pursue the screenings of non-traditional and foreign films.

“When it comes to small Podunk-like towns, (Champaign-Urbana) is as good as it gets to the subjection of the public to foreign films,” Rushing said.