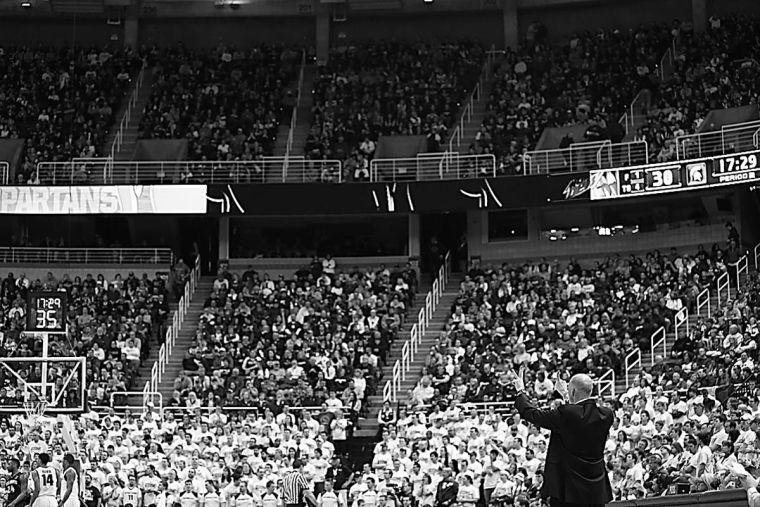 EAST LANSING, Mich. — The reward was Chicago-style pizza from East Lansing’s Pizza House. At least that’s how some of the Illinois basketball players celebrated their victory over Michigan State on Saturday.

Decked out in Illinois sweat suits, players munched on pizza with friends and family in the Breslin Center’s bleachers overlooking the court where they took down the Big Ten’s brass.

Thirteen white banners with green lettering indicating conference championships hang from the arena’s rafters. The Spartans’ chances of hanging another took a serious hit Saturday. With the 53-46 loss to Illinois, Michigan State falls two games back of bitter rival Michigan in the Big Ten race.

With three games to play for both teams, it’s possible Tom Izzo’s squad can right the ship. But a lot of things have to fall into place. For Illinois, all the pieces fell into place Saturday.

The Illini won a basketball game in East Lansing. The last time they did that, Malcolm Hill was in the fifth grade. That would be March of 2006.

“To get a win like this, this is big for us, especially late in the season,” Hill said. “I think we’re showing good composure. We could have called it quits when we were on the losing streak.”

The 2013-14 Illini are likely destined for the NIT or some other fate lesser than the NCAA tournament. But they haven’t quit, because it isn’t just about 2014.

It’s about the 13 banners hanging form the ceiling. Any Big Ten coach wants to build what Izzo has built in East Lansing. He can’t account for all 13 banners, but the Spartans have earned seven of them — more than half — under his leadership.

Saturday, the Breslin Center was full and the crowd was amped even though the opponent was in the bottom half of the conference. It wasn’t always like that. The Spartans had gone eight years between conference titles before Izzo won his first in 1998.

Illinois’ drought will extend to nine seasons when this season is over. These days the Big Ten champion usually has to go through the Spartans. It did in 2005.

“There are just too many things (we) have had to go through, so maybe a slap in the face is good for us,” Izzo said after the game. “It reminds me of 2005, maybe that’ll wake us up. We got hit today.”

Illinois beat Michigan State and won the Big Ten that year. But the Spartans reached the Final Four along with the Illini.

Groce’s squad beat a talented Michigan State team Saturday that is capable of making a deep run in March. It’s just more proof of how tough the Big Ten is.

“My wife will tell you I’m wrong about a lot of things,” Groce said. “But before the year I said, this is going to be the deepest we’ve seen this league.”

Every team in the conference has five wins in league play. That’s happened only three times before. This was Illinois’ sixth and probably its best all season.

While the pizza probably wasn’t the most rewarding part of the night, it likely tasted a little bit better Saturday.