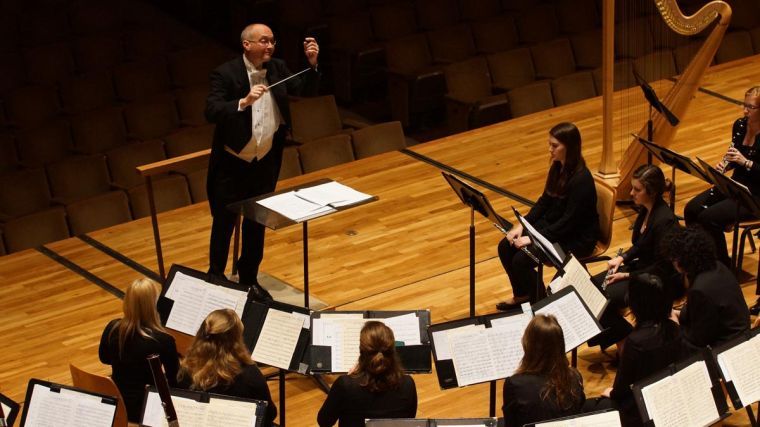 While most University students are here to work toward their careers and bolster their resumes, Jonathan Ashley Jarrell has returned to being a student after 10 years as an educator for one purpose: to learn.

Jarrell, the University’s first doctoral candidate in wind conducting, spent his first 10 years after receiving his master’s degree as a middle school and high school teacher. Now standing as both a student and teacher with the University, Jarrell hopes to continue to better himself as an educator and stresses the importance of real-world experience.

“I think a teacher is a teacher regardless of the level of the student,” Jarrell said. “If you have that spark, you want to give that information, you want to share, that is what a teacher does, is really share information. That is true for any level, but that is why I wanted to come back to just gain more knowledge.”

In addition to being a student, Jarrell holds the title of visiting assistant director of bands. He teaches courses in conducting and conducts the Hindsley Symphonic Band. Jarrell has conducted various performances, and he will be conducting the Hindsley Symphonic Band on March 11 at Foellinger Great Hall at the Krannert Center for the Performing Arts.

With his 10 years of experience as an educator, Jarrell brings excitement and knowledge to the classroom, no matter what level of education he is teaching.

“I don’t think it matters the student that Ashley is in front of,” said Linda Moorhouse, interim director of bands. “He is a very vivacious person when it comes to being a teacher. He is a pied piper. There is a wonderful energy in the room when he is there, he is a happy person, and the students enjoy being with him in class.”

Jarrell’s success at the University would not be possible without his previous teaching experience.

Martin Luther King Jr. Academic Magnet Pearl High School is a public school from grades 7 to 12 that requires an application process to be accepted. The school, according to Jarrell, had more than 300 students involved in the band program, making it that much harder for him to leave. But even with the many differences in the education levels, Jarrell still believes there is only one difference between the University and his former employer.

“You might have to say the same thing several times in order for them to get the concept,” Jarrell said. “But at the University level … you can move on to the next thing, and they’ve got it. Obviously, at the University level, the biggest difference is that you are able to cover more material because they move quicker.”

Even with his growing education and experience, Jarrell said he began where most musicians do — with a great teacher.

“Well, I think for a lot of people, the spark comes from a great teacher that they had, and my story is no different,” Jarrell said. “I had a fantastic high school mentor/teacher who was my high school director, his name was Terry Jolley, and he is actually still teaching. It meant a lot to me that he was very talented, but that he had an enormous amount of patience for his students to learn.”

Jarrell said Jolley managed to spark a curiosity in students of music, and “opened up this whole new world.”

Returning for his doctoral degree was something Jarrell always planned on doing. Though Jarrell is the first candidate for a doctorate in wind conducting, the program’s blue prints have been in place in the School of Music, Moorhouse said. The department was required to have courses approved through a variety of committees including the School of Music and the Office of the Provost. Jarrell has paved the way for future candidates; next year, the University will welcome two new graduate conductors in Wind Conducting, according to Moorhouse.

Since Jarrell began his doctoral studies in fall 2011 at the University, he has brought inspiration to others, according to Terri Daniels, University bands business manager.

“I think he brings inspiration to those of us who want to continue because he has done what so many of us have done; he has gone out and worked and done everything that he can to advance his career and succeed and contribute,” Daniels said. “But he left that to come back, and do more and be more, and better himself. But, also be better for other people to help them, and to me personally it is an inspiration to see somebody else do it. It makes me know I can do it too.”

Though Jarrell has inspired many by simply coming back to school, he hopes to spread a message about education and confront a recent growing trend that he views as problematic. Jarrell said he was weary that students are not pursuing real world experiences, which are necessary to be successful in the classroom, particularly in higher degrees. Instead, they are simply going through schooling years to simply finish before entering the market.

“Degrees are important, degrees you attain knowledge through your education, but then you need to go and apply it. And then you come back to the school,” Jarrell said. “Go to the University, get a degree, gain knowledge, go out and work before you come back. Don’t stay in academia because you aren’t really going to get all of the skills you need at the school.”