Illinois men’s basketball blown out by No. 12 Michigan 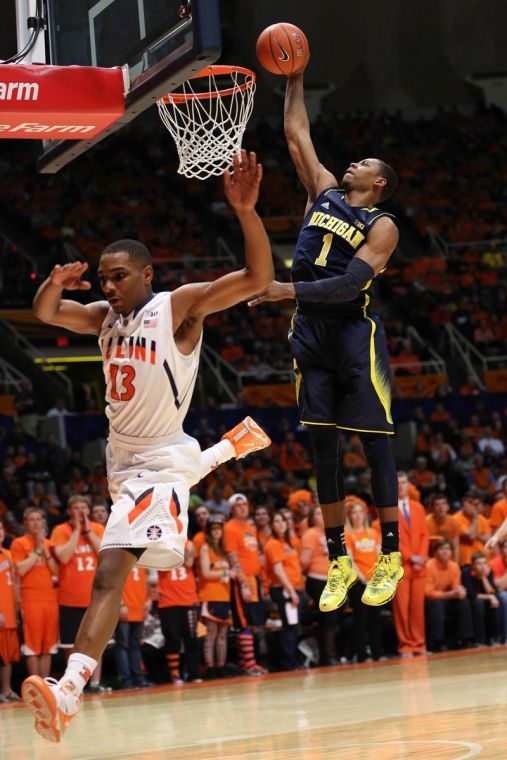 No. 12 Michigan only needed two points in the second half to beat Illinois and win an outright Big Ten Championship. It scored 32.

After holding four straight opponents below 50 points, the Illinois defense got burned for 52 points in the first half. The Wolverines came out hitting on all cylinders, shooting 67.9 percent overall and 78.6 percent on 3-pointers in the first half.

The Wolverines cooled off a bit in the second half, shooting 43.5 percent from the field and 55.6 percent from long range, but still beat the Illini 84-53 in the worst loss in State Farm Center history.

Michigan clinched its first outright Big Ten Championship since 1986 in what head coach John Beilein said was the team’s best performance of the year.

“We’ve had some very good games this year, but none like that,” Beilein said. “I haven’t seen that in practice even.”

Derrick Walton, Jr. started the shooting clinic a little bit less than two minutes in, hitting the first of Michigan’s 16 3-pointers — tied for the best performance by an Illinois opponent in program history. Nik Stauskas hit seven of nine 3-point attempts and scored 24 points to lead the Wolverines.

But Stauskas wasn’t alone. Zak Irvin went 3-for-5 from beyond the arc, while Caris LeVert was 2-for-3 and Spike Albrecht went 2-for-2 from deep. Glenn Robinson and Walton each added one more longball.

“It’s kind of contagious when one guy gets going, we just kind of fed off it,” Stauskas said.

“At the end of the day, the difference was the 3-point line,” head coach John Groce said. Illinois was outscored 48-6 on 3-pointers.

“Lately we’ve been playing great defense,” Rice said. “They would just knock down every open shot they got.”

Freshman Kendrick Nunn was the only other Illini in double figures, scoring 14 points.

Freshman Malcolm Hill shot 1-for-5, but Beilein said he wouldn’t worry about it.

“He is a really talented player that Illinois should embrace. Just watching him in the Michigan State game, he’s a heck of a player,” Beilein said.

Illinois came into this game with positive momentum following its win at No. 18 Michigan State on Saturday, but that momentum faltered against the Wolverines. Groce said it will take a great amount of mental toughness to bounce back at No. 24 Iowa on Saturday.

Still, Groce said Illinois has been playing its best basketball of the year lately, and it ran into the Wolverines on a historically bad night.