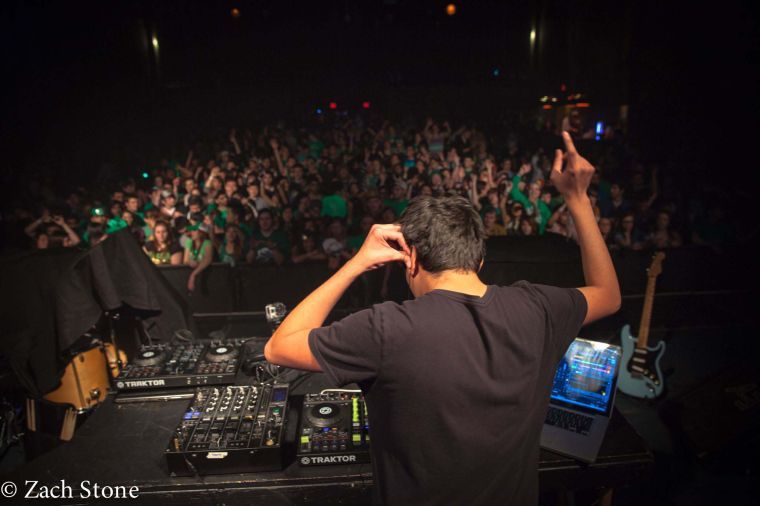 Frankie Sanchez DJs for a sold-out crowd at the Canopy Club in Urbana on Friday. He was part of the first ever Heartland Music Festival, which took place during Unofficial weekend.

“We have been waiting for this weekend,” said Josh Golden, manager of performing artist, Frankie Sanchez, to The Canopy Club’s packed audience Saturday night. “And this is the best weekend we have ever had.”

On Friday and Saturday night, The Canopy Club hosted its first-ever Heartland Music Festival, which began at 9 p.m. and featured various electronic dance music artists. The festival brought all types of EDM enthusiasts together to enjoy an electrified night of dancing and raving.

As the doors to the big stage opened at the sold-out-show on Friday night, a sea of students in bright green Unofficial St. Patrick’s Day attire filtered into the room. Performing artists such as Bad Luck, Kromuh, Disflow, Frankie Sanchez and headlining band The Floozies took the stage, animating the crowd with a series of high and low tempo mixes.

For growing artist Frankie Sanchez, Heartland Music Festival was his first out-of-state concert. Hailing from Bakersfield, Calif., he said Heartland created a different kind of audience and performance for him.

“This whole weekend has been an amazing experience for me,” Sanchez said. “I’m very grateful for all of it. It’s mind-blowing, to be honest.”

Sanchez’s impression of the full crowd was also favorable.

“I thought they were amazing,” Sanchez said. “They were very receptive to everything that I played, and that was awesome to me.”

As Friday’s performance went on, the energy of the crowd began to build. Flashing neon lights beamed through the raving crowd, with bright-colored patterns and stimulating visuals illuminating the room on big screens behind the performers. Audience members tossed around white, light-up beach balls to the beat of the music and pumped their fists in the air as the bass dropped.

“The production on stage was on-point,” Sanchez said. “I was very happy.”

As the second night of Heartland Music Festival began, the crowd was noticeably smaller and attendees were dressed in drastically different clothing. Instead of a mass of green Unofficial sweatshirts filling the audience, concert-goers dressed in jeans and nicer T-shirts, and some even wore heels, skirts and silk blouses.

Artists such as Krucial, Meccom, Disflow and headlining artist Kap Slap performed on Saturday night, delivering a different vibe to a new audience.

Before going on stage, Alex “Disflow” Rymarz, junior in LAS, said he anticipated performing for higher-energy crowd than the night before.

“The line up tonight is harder,” Disflow said. “The Floozies had a lighter set. I’m catering to a different artist that I’m opening for.”

Disflow also mentioned that his longer performance time on stage will also change the dynamic of his mixes as well.

“I plan on going harder tonight than I did last night,” Disflow said.

As Disflow performed, the strobe and flashing lights continued to excite the audience during the different sets. The entire room had smokey atmosphere, and the light-up beach balls made their way back into the crowd. Festival attendees wore glow stick bracelets and necklaces and jumped to the beat of Disflow’s mixes.

At the end of his set, Disflow thanked his audience and introduced the next performing artist.

“Thank you Champaign,” Disflow yelled to his crowd. “And get ready for Kap Slap!”

As Kap Slap entered the stage, the crowd cheered and screamed. Kap Slap’s overall performance was very high tempo, mixing in popular songs such as Miley Cyrus’ “Wrecking Ball,” Icona Pop’s “I Love It,” and Zedd’s “Stay The Night.” Golden and Heartland event promoter, Simon Bernick, shot confetti into the crowd, and pumped up the crowd through the set. Students were still entering the venue and buying tickets at 1:15 a.m. to see the show.

Because the event took place over Unofficial weekend, Blane Warren, security guard at The Canopy Club, said the venue was successful in keeping a safe environment for all.

“We had security all around looking for underage drinkers and people who were extremely drunk,” Warren said. “We wanted to take care of the situations before it blossomed. Nobody was injured as far as I am aware of.”

As the festival came to an end, Bernick said he was happy with the festival’s overall production and performances.

“The first night we sold out, and tonight we almost reached capacity,” Bernick said. “We brought out a great production, and Heartland came out wonderfully. “

Bernick felt that the goals of Heartland — to provide a safe option for students on Unofficial weekend and to bring the campus together — were reached throughout the weekend.

Editor’s note: A previous version of the photo caption said Frankie Sanchez DJed for a sold-out crowd at the Canopy Club in Urbana on Saturday. He performed on Friday, not Saturday. The Daily Illini regrets the error.