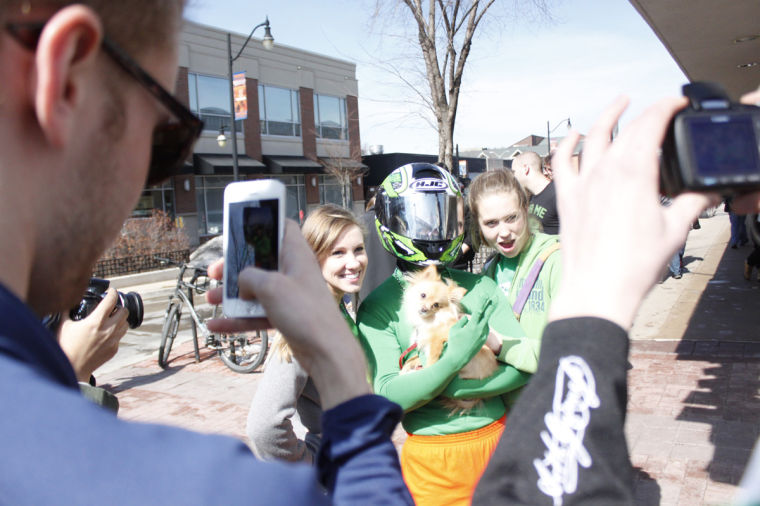 Unofficial participants pose for photos with a student who calls himself Greenman Kirby and a dog on Green St.

Unofficial is over. Whether students went out or stayed in, many memories have been made. Local and University officials have made it through this year without any major incidents. As students piece together their weekend through pictures and texts, these 10 tweets may spark a hazy memory of the crazy “holiday”:

@OscarCahue: Apparently Eastern Illinois tried having their first Unofficial this past weekend. Get outta here. Get on our level. #UofI #Unofficial2014

Days before Unofficial, Oscar Cahue was not very happy that other universities were trying to replicate Unofficial.

@BlackSheep_UIUC: READ THIS before you go to bed: “TWAS THE NIGHT BEFORE #UNOFFICIAL”: http://bit.ly/1fKyFfg

Champaign Mayor Don Gerard celebrated Unofficial Eve by stripping down and running down Green Street with University students. The proceeds of the Underwear Mile event went to the Illini 4000 registered student organization.

@Snodgrss: ‘Unofficial’ forecast update: highs nearing 50F with a good amount of sunshine. Could be a bit windy though. Have fun and be safe.

Eric Snodgrass, director of undergraduate studies for the department of atmospheric sciences, shared Unofficial’s forecast to his followers.

@Andreaaalynn_: Danielle pulls bacon out of her fanny pack #UNOFFICIAL2014

Andrea Lynn went to Twitter to inform her followers that eating is still very important during Unofficial.

@JoesBrewery: 10AM GET YOURSELVES HERE BECAUSE RAFFLES WILL BE HAPPENING #UNOFFICIAL2014

Joe’s Brewery informed patrons when the bar opened for Unofficial there would be a raffle.

The Daily Illini reported a picture of the Urbana Police Department replying to Mike Bailey, an individual wanting to know where the Unofficial parties were at.

EatCU provided food and drink pairings for Unofficial to its followers. “Wings+frozen margaritas” doesn’t sound like the best combination.

@BP3: To everyone at U of I celebrating #unofficial2014 have a good time but please be smart & safe while partying

Brandon Paul, University 2013 alumnus, assured his followers to have fun but to be safe while out celebrating Unofficial.

@News_gazette: #Unofficial in history books. “We didn’t have any serious injuries, which was good,” Lt. Jim Clark said: http://bit.ly/1lJPqcQ

In the end, The News-Gazette reported that students are starting to adhere to local police departments’ messages on safety.

David Rothmund can be contacted at [email protected]