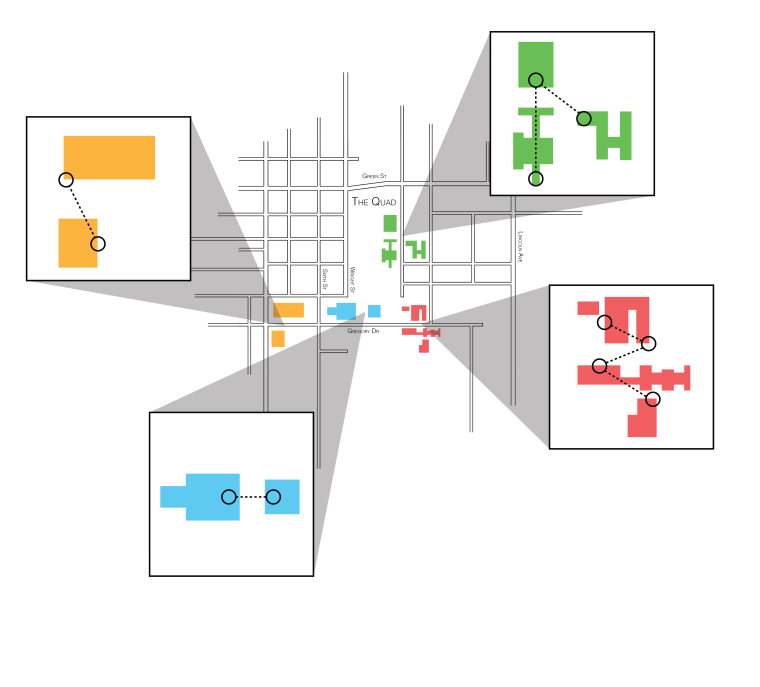 The shoes of Bethany Cutts, assistant professor in Natural Resources and Environmental Sciences, hit the ground and reverberated through the tunnel, the echo bouncing off its cold, gray walls.

Companions were few and far between as Cutts walked from Bevier Hall to Turner Hall in an underground tunnel far below the cold, icy ground of the campus above.

Her Natural Resources 287 class, which meets twice a week, had just ended in Bevier, and she was in a rush to get back to her office in Turner Hall for a meeting.

“(The tunnels) are kind of creepy, I don’t think many students know about them,” said Cutts, as she opened a gray door that descended further into the basement tunnels of Bevier.

The tunnel she walks through to get to her class connects Bevier Hall, the Animal Sciences Laboratory, Edward Madigan Laboratory, the Institute for Genomic Biology and Turner Hall, and runs under Gregory Drive. The tunnel is marked by signs that indicate the locations of buildings, and access to it can be found in Bevier Hall across from room 100D and to the left of room 131.

Cutts, who began working at the University in the fall of 2011, said it was a student who first showed her the tunnel in the spring of 2012. It was a stormy day when there was a tornado near campus, and Cutts said the tunnel is an official University tornado shelter. She said she started using the tunnels regularly to get from Bevier Hall to Turner Hall to avoid the cold when she began teaching classes during the winter.

Steven Breitwieser, media communications specialist for Facilities and Services, wrote in an email that along with this tunnel on the South Quad, there are three other underground tunnel systems on campus accessible to pedestrians and that function foremost as tornado shelters. They connect the Undergraduate Library to the Main Library, the Noyes Laboratory to the Chemistry Annex and Roger Adams Laboratory, and the Armory to Huff Hall.

Jasmine Kirby, sophomore in LAS, said she found the tunnel between Noyes Laboratory, the Chemistry Annex, and the Roger Adams Laboratory as a freshman. She said she also uses it to avoid the cold when running between her labs. The only tunnel with restricted access is the tunnel between Armory and Huff Hall, which is limited to athletes by a passcode. The tunnel entrance at the Armory is located at the southwest corner of the track, marked by a tornado shelter sign. It goes under Gregory Drive and resurfaces in Huff Hall, right outside of the door to the gymnasium.

Anthony Manfrin, cross country and track and field runner at the University and junior in Media, said he uses the Armory tunnel every day to get from the indoor track to the locker room and training room in Huff Hall. He said he wishes underground tunnels connected every building on campus.

“It would make getting to class a lot easier, especially in the winter,” he said. When he first encountered the tunnel the first day he was on campus freshman year, he was a little freaked out by it, he admitted.

“The lighting is pretty scary,” he said, “but we practice every morning in the Armory so I couldn’t imagine not having it,” he said.

Editor’s note: A previous version of this article stated that a tunnel can be accessed in Bevier Hall behind room 180, designated by a tornado shelter sign. It should have said that the room is across from room 100D and to the left of room 131. The Daily Illini regrets the error.