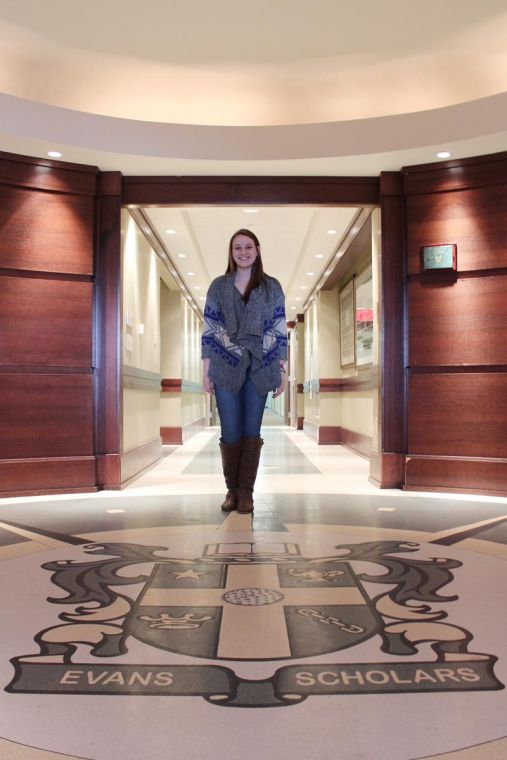 Imagine coming from an all-girls school on the south side of Chicago to the University of Illinois. Then imagine doing the same thing, except coming to the University to live in a house where the residents are roughly 75 percent male and 25 percent female. Mary Joan Evans, freshman in LAS, knows this transition, after having arrived on campus for her first year of college in August.

“College is a culture shock, but with 90 guys, it’s even harder,” Evans said. “There are more guys than I’d see in a month’s time (back home).”

Evans is currently a biochemistry major and Spanish minor who is hoping to transfer into Business. However, she is also an Evans Scholar recipient, a scholarship awarded to golf caddies based upon their grades, involvement, financial need and, of course, their caddying skills.

The University’s Evan Scholars program, founded in 1951, is the largest chapter of the 14 in the country, with the largest population of girls as well, said Julie Homerding, Evans Scholar and senior in Media. In contrast, Northern Illinois University does not have any girls in its chapter, and Northwestern University had female members, but only some were living in the house because it was being renovated.

Due to Evans’ caddying experience in high school and her academic performance, she was accepted into the Evans Scholars program, and therefore permitted to live in the Evans Scholars house for her undergraduate career at the University. Because the makeup of the house is male-dominated, the top two floors of the house are for the male upperclassmen, the first floor is reserved for male freshmen and the second floor is for mostly females — and even then, some rooms belong to boys.

“We’re all caddies, but we’re all different people. There are close friendships, relationships, and then there are people who won’t ever knock on each other’s doors,” Evans said. “They’ll pick arguments, but I know that if I ever needed one of them to walk me home or anything like that, any of the guys would be 100 percent ready to go.”

Homerding has known Evans since 2010 when Evans started working at Beverly Country Club (Homerding started in 2007). She too understands how the unbalanced co-ed dynamic can be frustrating.

“They think we’re outnumbered. But we stand our ground. In the end, we’re a family, like brothers and sisters. Having a strong personality as a woman can be challenging,” Homerding said.

Homerding, who was accepted into the Evans Scholars program for her sophomore year, said that when her friends found out she was moving into the house, they thought it would be like living in a fraternity. But Homerding said the house members are like family, sharing commonality in caddying and academic performance.

Evans has only been caddying since her sophomore year of high school, and she cites her uncle’s caddying and attendance of Northwestern as her inspiration.

“You realize how rewarding (caddying) is. Doing it for a summer, three, four, five years — you’re gaining people skills and work ethic. You meet so many nice people, and you meet jerks who don’t tip you, or swear at you or blame you for losing their ball,” Evans said.

Evans caddies at Beverly Country Club in the south side of Chicago. The club has brought in celebrities such as President Barack Obama, former White Sox general manager Ozzie Guillen, former Blackhawks Ben Eager and Dave Bolland, and current Blackhawk captain Jonathan Toews, with whom Evans has pictures with.

Caddies at Evans’ country club have three training dates at the end of March and early April. More experienced caddies or volunteer members teach their trainees how to read yardage, properly carry golf bags, wash clubs and tend the pin, among other duties.

Golf is largely male-dominated and can become intense, so it is not uncommon for golfers to take out their frustrations on their caddies. However, since Evans is female, they react differently toward her. Boys can get yelled at or sworn at, but the reaction is different toward female caddies, she said.

“They’ll keep their distance or walk away. If it’s a girl, they won’t freak out at us. They’ll say ‘pardon my language’ or apologize to each other for crude things,” Evans said.

Caddying can be just as frustrating as golfing. Carrying around heavy clubs in sweltering heat is no easy task, and caddies can arrive to work at 7 a.m. and not get called out until 3 p.m., she said. Evans still considers caddying “one of the best jobs you can have,” even with these factors.

“She’s such a hard worker. She really helps around the house and is one of the leaders in the house,” said Sam Telfer, president of Evans Scholars and junior in Media.

Telfer said the female population grows every year. In past years, members were once only male. This year the population is 25 percent higher than in the past years; a change Telfer said he enjoys in the house.

“It makes the house cleaner and separates us from the Greek system. It’s not a dorm and more personable. With a frat, it’s just guys. There’s a bigger social network with girls. They’ll introduce you to their friends,” Telfer said.

While the Evans Scholars house is not a part of the Greek system, they do share similarities. They have an executive board and chapter meetings and follow four pillars: scholarship, group living, house maintenance and fellowship. They also participate in philanthropy events, a common activity within Greek life. The Evans Scholars house does not have a meal plan, so Evans and other members work meal shifts in sorority houses kitchens, such as Alpha Omicron Pi, Chi Omega, Tri Delta and Delta Gamma. Evans works twice a week at the Alpha Omicron Pi house.

Overall, while the Evans Scholars may not be Greek, they’re still a family.

“We get to see each other grow up,” Homerding said.

Editor’s note: A previous version of this article stated that Northwestern University did not have any female Evan Scholars until 2010. It should have said Northwestern did have female members, but only some were living in the house because it was being renovated. The article also stated that caddies can arrive at 10 a.m. It should have said 7 a.m., and it also also misspelled Sam Telfer’s last name on second reference as Teifer. The article also stated that Julie Homerding has known Mary Joan Evans since 2010, when they both started working at Beverly Country Club. Homerding started working in 2007. The Daily Illini regret the errors.