Marching Illini to tour through Ireland 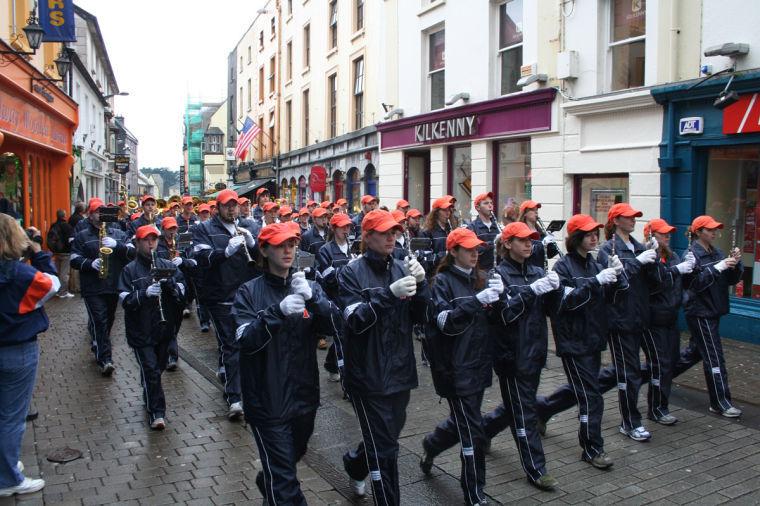 Though most identify St. Patrick’s Day and Ireland with the color green, the Marching Illini will be celebrating in blue and orange. On March 17, they will march down the historic winding streets of Dublin, Ireland, in the St. Patrick’s Day parade.

The trip to Dublin is nothing new for the band; this will be its seventh trip and its first since 2008. Barry Houser, director of the Marching Illini and athletic bands, said that while he hopes the band can participate in the parade on a consistent basis, the trip is a once-in-a-lifetime experience.

“For a lot of our students, this may be the last opportunity that they have to do some international travel to this extent,” Houser said. “I think most importantly is just the fellowship that each of them has with one another. We talk with our students a lot that these are performances and experiences of a lifetime — just being a member of the Marching Illini — that they aren’t going to have these experiences later on in life.”

The Marching Illini will travel to Ireland to see a variety of tourist attractions and perform for the seventh time in the St. Patrick’s Day Festival Parade in Dublin. The band will depart Thursday from Chicago’s O’Hare airport, and the trip will last a total of six days and five nights.

The trip has been a trademark for the band since 1992, with one having been planned every three to four years. However, according to Houser, due to a variety of transitions in leadership in the band program, they had a “brief hiatus” in holding the trip. Now in a stable place, the band looks forward to continuing the tradition.

“They have been wanting us to get back there for a couple of years now,” Houser said of the festival organizers, students and alumni. “I think a lot of that is just built from the history back to 1992, and a lot of our alums have great memories of those trips and they want to see our current students experience the same things. So it made such great sense to continue with that tradition.”

This trip has been in the works for over a year, Houser said. While the trip typically fell over spring break in past years, students attending this year will miss four days of classes with the academic schedule’s recent shift.

Despite missing classes, the band will given opportunities throughout the trip that cannot be experienced in central Illinois.

Throughout the trip, the band will spend the first two nights in Limerick and finish with two nights in Dublin. The Marching Illini will see not just tourist attractions like the Cliffs of Moher, St. Patrick’s Cathedral and the Guinness Storehouse, but will also be allotted time each day to tour the areas of Limerick, Dublin and the town of Ennis, a traditional Irish town with a population of more than 25,000.

Even with the Marching Illini’s amount of travel to games and athletic events across the county, the opportunity to perform in another nation is something that excites students and puts the band in a different element.

On St. Patrick’s Day, the Marching Illini will perform as the final group in the parade, which begins at noon in Ireland or 7 a.m. in Illinois.

The parade is the highlight and one of the final events of Dublin’s St. Patrick’s Day Festival, which lasts from March 14 to March 17, St. Patrick’s Day. This year’s parade has taken on a theme of “Let’s make history,” according to the festival’s website. The theme focuses on the past and is a part of a three-year sequence in which the festival will explore the past, present and future.

“I think it is a good representation of Illinois in general,” Widomska said of what the Marching Illini brings to the parade. “I think it also brings more of an excitement of a collegiate marching band over there, just seeing a different vibe.”

The parade will last approximately two hours long, Houser said, and the route is approximately 1.5 miles long in downtown Dublin. Ending just past St. Patrick’s Cathedral, the parade will pass the O’Connell Bridge over River Liffey and near Trinity College Dublin.

Following the parade, the band will take a trip to the Guinness Storehouse, one of Ireland’s largest tourist attractions, where they will play a 15-to-20 minute performance. Amy Bischoff, music section leader for trumpets and senior in FAA, said that because the band will be standing on one of the three levels of the building, they will be able to “throw in our own personal grooves and personal dance” for a lot of the songs.

Despite the performances being in such prominent settings, the trip for students is much more than just an opportunity to perform.

“I like that it is broken down, it is a trip for us,” Bischoff said. “It isn’t just a performance; it is a trip. I expect the performances to be good quality, but I don’t expect it to be mentally exhausting.”

The trip will bring a total of 325 people, Houser said, with 275 of them being members of the Marching Illini. A variety of faculty, staff, parents and alumni will also join the band for the trip.

Despite the struggles of managing the varying hotel and room situations, traveling and setting up the performances, Houser said that his main focus for the trip is the students.

“I am excited that our students get this experience ultimately,” Houser said. “I hope the students enjoy it, and that is where my greatest satisfaction will come from … (seeing) them have a great time and having those performances of a lifetime.”