‘From Dudes to Divas’ drag show to take place Thursday 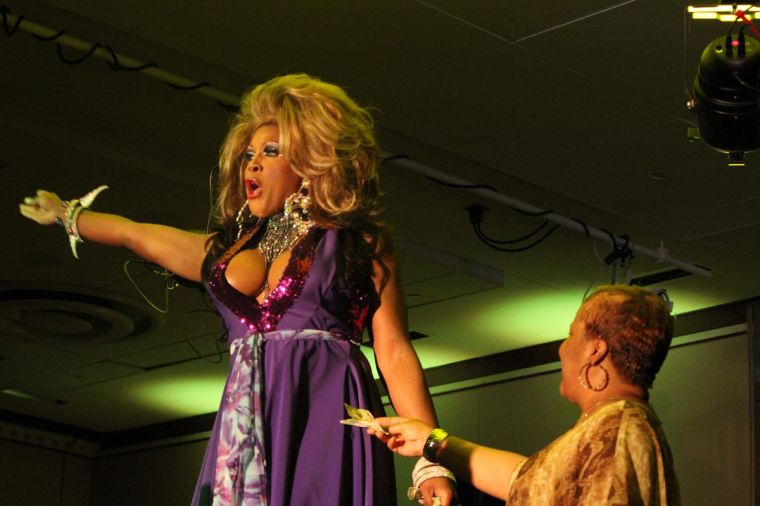 Tamara Johnson (right), mother of Kenneth Johnson (left), also known as Kelasia Karmichael, offers her son a tip during one of his previous performance in the Illini Union Board’s Drag Race at the Illini Union. Kenneth said he is grateful for the support his family offers him. Tamara said, “I just want to let him know I love him and keep on doing. And he’s my angel.” This year’s show will take place on Thursday at 7:30 p.m.

Just before his performance at Chester Street Bar last Sunday, Dakota, who performs under the stage name “Bo Dashuss,” began preparing for his role in a drag show.

Looking into the mirror in one of C-Street’s upstairs dressing rooms, he described his methods of preparing for a show.

“Depending on the night, most of the time it’ll take me (about an hour) to completely get ready,” he said, as he attached small fragments cut from his own light brown hair to his jaw with adhesive glue in a practiced and precise manner.

Bo Dashuss will be one of nine performers in “From Dudes to Divas,” a drag show sponsored by the Illini Union Board, which will take place Thursday at 7:30 p.m. in the Illini Union I-Rooms.

According to Aditi Warhekar, the IUB’s cultural programming director, Thursday’s performance is not so much a competition between contestants but rather a means of showcasing the art of drag. This annual event features contracted performers who do not attend the University.

Drag shows consist of multiple acts performed in drag. Drag costuming and makeup can be as simple or elaborate as the wearer prefers, and the acts can span from singing and dancing to a monologue or skit. It is common for drag kings and queens to lip-synch or perform dances to songs of their choice.

Though in film and pop culture drag shows are often associated with gay or transgender men, the concept of the drag show really bares none of these direct associations; that is, drag queens can be straight, gay, transgender or bisexual. Many different people, gay and straight alike, both watch and participate in drag shows for a variety of different reasons.

He said his outfit for the night is often inspired by the song he’s performing.

“It all kind of depends on what music I’m doing. … If I’m doing a country number, obviously I’ll dress more country. If I’m doing newer stuff or anything like that, it’ll just depend on what I’m feeling.”

For Bo Dashuss, drag is an art form.

Warhekar explained that the IUB drag show has been met with abundant success in past years, which is why it returns to the University year after year.

“The crowd has loved the event, so we keep bringing the show back,” Warheker wrote in an email.

The show was organized by the Cultural Programming department of IUB, an organization that “works to promote an appreciation for diversity on campus,” according to the group’s mission statement.

Bo Dashuss will perform as a drag king alongside a group of almost exclusively drag queens.

Ryan Kuramitsu, IUB’s director of enriching programs and junior in Social Work, said he is anticipating an audience of as many as 100 people. The doors for the show open at 7 p.m., and student tickets can be purchased for $5 at the Quad Shop or for $7 at the door.

Carly can be reached at [email protected]