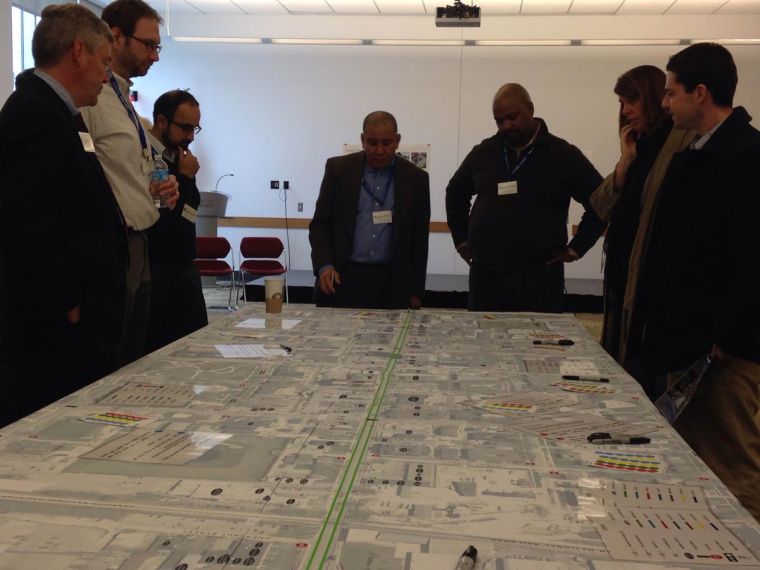 Champaign kicked off the third phase of its Green Street Renovation Project on Wednesday with an open house at the Champaign Public Library.

The open house introduced the project and allowed residents to provide input on design concepts for Green Street between Fourth Street and Neil Street.

“We’ll completely rebuild everything about the streets: new sidewalks, new lighting, new trees, new street surface. All the different kind of amenities that are currently in the heart of campustown will extend right now all the way to First Street,” T.J. Blakeman, City Implementation planner, said.

Boards were set up around the room, providing attendees with information such as beautification ideas and before and after pictures of the street. A map was spread across the table that attendees could mark up with comments.

People were given pamphlets of information, where they could also write down suggestions and concerns for the project.

“We have stops about every other street. With the streetscapes, they put planters or rails up that look nice, but sometimes they get in the way of people getting on and off buses. So I just want to make sure the placement of those is thought about,” MTD Planner Jay Rank said.

The goal of the $6 million project is to beautify this section of Green Street and accommodate all modes of transportation, according to the city’s Building Green Street website.

Clark Dietz, Inc., The Roderick Group, Side Design Group, Ltd. and ERI were selected to work with the city to design the redevelopment of this portion of Green Street.

“Really at the moment, we don’t have any ideas on the table because this is the first open house to gather public input for the project,” Sean Widener, Clark Dietz Project Manager, said. “Obviously we have ideas of how it could look.”

Funding for the project is coming from the city’s Food and Beverage Fund, which is funded by the food and beverage tax, according to the Website.

The team will update the Champaign City Council in April and will return to council in October once the preliminary design phase is complete, also in October.

Work on the final design will begin in January of 2015 and will be completed in November of 2015.

Bids will begin in December of 2015, and the contractor will be selected in February of 2016. Construction will begin in 2016, and Blakeman said they hope to complete construction by the beginning of the school year.