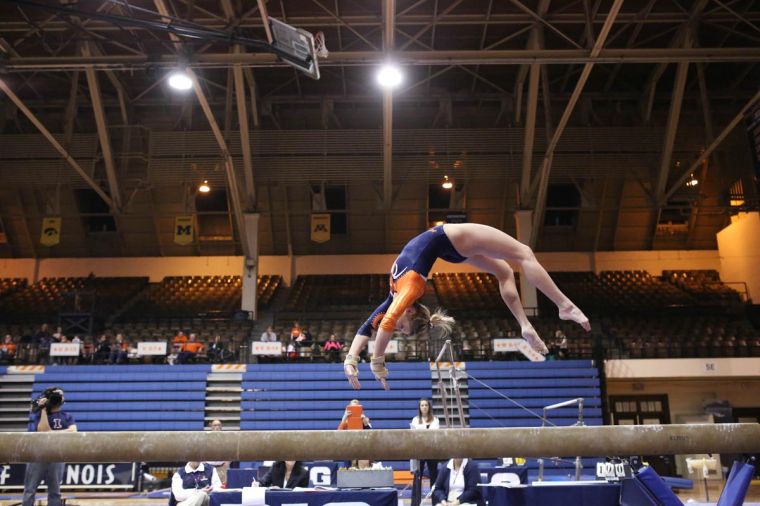 The regular season is nearing its end for the No. 14 Illinois women’s gymnastics team, and championship season is just around the corner. First, the Illini will have to get through Saturday’s Big Ten Quad Meet — where they will face Michigan State, Nebraska and Ohio State in East Lansing, Mich.

Both head coach Kim Landrus and senior Amber See said the meet will serve as good preparation for the Big Ten championships, which will take place next weekend. It will also determine where the Illini end up for the championships.

With a top-two finish this weekend, Illinois will move on to the night session of Big Ten championships. The night session consists of the best teams in the conference, which is where the Illini want to end up. See added that the team has a good chance to make it there, as they’re the second-best team, ranking-wise, in the Quad Meet, but the gymnasts know they have to rely on the details of their performances.

“We just have to continue to work on what we’ve been working on and making sure that we’re consistent with all the little things, ‘cause it’s going to be the details down the road that will get us where we need to be,” Landrus said.

Two specific details Illinois has emphasized are handstands and stuck landings. The time the Illini have spent on those skills paid off last weekend when they broke the school record by scoring an all-time high team total of 197.100.

“It was just finally putting everything together,” See said. “We didn’t really do anything special. That’s the thing. We literally just did the same thing that we’ve been doing all year, and we had a few more sticks and just little tenths here and there. So it just shows that the little tenths add up and that if we can do that same job again, then we are capable of getting a 197 and being competitive with the top 15 teams in the nation.”

Sophomore Giana O’Connor said finally reaching that score has boosted the team’s confidence in knowing the gymnasts are capable of it. In fact, Illinois is the only other team in the Quad Meet besides Nebraska that has scored a 197 this season. Ohio State’s highest score this season is a 196.600, and Michigan State has yet to score above a 195.550.

Illinois has also faced Michigan State and Ohio State earlier this season. The Illini defeated the Buckeyes in a tri-meet on Feb. 23, and the team opened their season against the Spartans in a 195.325-194.150 win.

Not only is Nebraska the only team Illinois has yet to face, but the No. 9 Huskers are also the only team who is ranked above the Illini; however, the Illini know they have what it takes to put up a fight.

“We just have to do our job, and then the rest is kind of not really up to us,” See said. “So I think that if we go in, do our job and hit, that we’ll be competitive with them.”