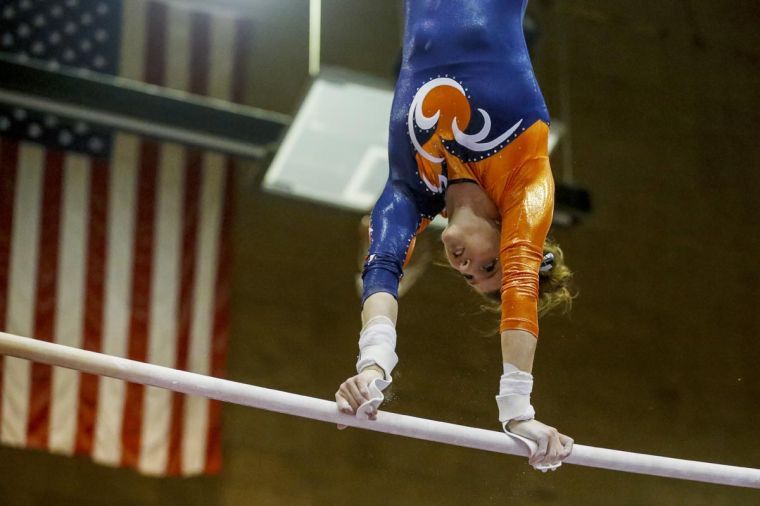 The No. 14 Illinois women’s gymnastics team scored a 196.875 to take second place at the Big Ten Quad Meet, allowing the team to accomplish its goal of making the evening session at the Big Ten championships.

Nebraska, who will also be in the evening session, took first with a 197.050, but Illinois scored high enough to beat out No. 23 Ohio State and Michigan State.

“We knew, with Nebraska and Ohio State, that it was going to be a fight,” freshman Mary Jane Horth said. “We were really excited that we were able to just come out and do just what we had practiced, and the outcome was just the cherry on top.”

Illinois began the meet on uneven bars, moved on to balance beam, competed on floor and finished the meet on vault. The gymnasts managed to score above a 49 on all four events for just the third time this season.

On bars, the Illini scored a 49.225. From there, the event totals went down for beam and floor; however, they managed to finish strong, which head coach Kim Landrus has emphasized all season.

Illinois’ 49.350 on vault was its best score of the meet. Senior Sarah Fiedler started the event by scoring a 9.675. From then on, the scores improved dramatically, meaning Fiedler’s score didn’t have to count. Sophomore Giana O’Connor, freshman Emily Lennon and Horth each earned a 9.850 for their vaults. Then, senior Amber See and freshman Erin Buchanan both provided a 9.900 to contribute to the team score.

“Our last five performances on vault were truly spectacular,” Landrus said. “To go out and finish the meet completely strong, that was exciting. It kind of capped off a great day.”

The team’s vault score was also its second highest of the season, but it came as a result of a slight lineup change. Horth said “nagging shin issues” caused sophomore Heather Foley to sit out Saturday afternoon, which allowed Horth to compete on vault for the first time this season. This, however, wasn’t Illinois’ only lineup change.

Horth was also inserted into the beam lineup after Lennon decided to sit out the event due to a sore hip. Just as her 9.850 vault was the first one of the season, Horth’s 9.875 beam routine was also her first, excluding exhibitions.

“(Horth’s) kind of been that little engine that could all year and does exactly what we ask her to do,” Landrus said. “She just really, really prepared herself for this moment, and so I think it’s just exciting that she went out and hit 3-for-3.”

The lineup changes proved to not bother Illinois. Senior Amber See said seeing Horth compete three events for the first time showed the depth the Illini have, but they know still have work to do.

“We’re hungry for more,” See said. “We’re not going to stop here. So we really want to move into Big Tens with constant momentum and just use it to our advantage.”