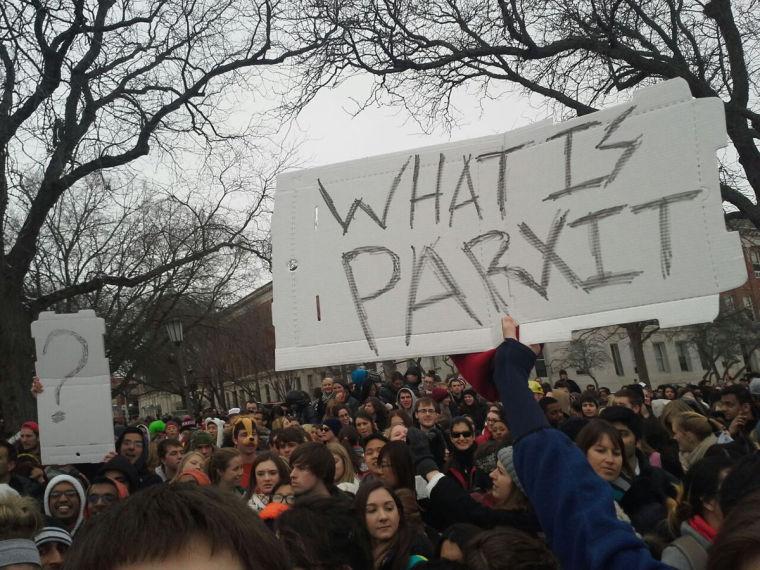 Alumnus Shagun Pradhan, one of the creators of ParXit app, holds a pizza box with the phrase “What is Partix” among a crowd on the Quad on Monday, Feb. 24. Pradhan visited campus during Ellen DeGeneres’ social media event to publicize his app.

The average cruising time to find parking in the U.S. is 7.8 minutes, and about 30 percent of traffic is caused by people looking for parking. Alumni Yudhi Seotono and Shagun Pradhan recently released an application to help solve this problem.

ParXit, whose name is based off the phrase “park it,” is a crowdsourcing app that allows people to list and find parking spots in metropolitan areas around the United States. As an New York City-based start-up, this mobile app helps users find and profit from public on-street parking.

A ParXit user can be a finder or a lister. A lister finds a parking spot, lists its location, time of availability and a short description of the parking spot (size, meter, etc.). The finder lists his or her destination, time of arrival, search radius and monetary offer for information on a parking spot. The search then reveals a variety of parking spots within the finder’s radius and allows the finder to receive that information after payment is received. Because finders can set the price they want from listers, the predicted average transaction will be $3. The lister then gains access to the payment after a 24-hour holding period. The app then receives a 20 percent service fee from users.

The app also includes a rating system to evaluate the trustworthiness of each lister and finder.

“ParXit is the convenience in finding on-street parking, and it is a way to help people get paid for parking,” said Seotono, ParXit cofounder and CEO.

Seotono, who received a B.S. in Finance from the University in 2001, worked in finance until 2009. He then put a team together and work on the idea of providing a convenient form of selling information about parking. Seotono is responsible for overseeing management and design of the ParXit app project and team.

“Our main priority right now is getting investors and marketing the app,” Pradhan said.

Pradhan received a B.S. in communication from the University in 2013 and is now on the ParXit team conducting market research and customer service. The team also consists of Serge Kannon, cofounder and design specialist; Anthony Nakaar, vice president; and Stephanie Hendricks, legal adviser.

The team is working with venture capital and other investors to get the app on the map.

“We want to fully blow it up with a marketing campaign and get it out there for people to use,” Pradhan said.

The app was released on Apple’s App Store on Feb. 24, the same day Ellen DeGeneres visited campus. Pradhan marketed the app “guerrilla” style, taking a pizza box and writing “What is ParXit?” on it. He stood out in the cold on the Quad among thousands of others and had quite a few individuals approach him with questions.

“It really sparked the curiosity of people and got them asking about it,” Pradhan said.

Seotono hopes to find an opportunity to make a big “public launch.” Pradhan said they plan on finding an investor who can afford “a little bit more risk” because of the early stage the app is in right now.

“It’s got a good starting amount of traffic, especially for the stage that it’s at right now,” Pradhan said. “We launched a couple weeks ago, and we want to expand it to the Android market as well.”