Announcing the winner of the Twittournament 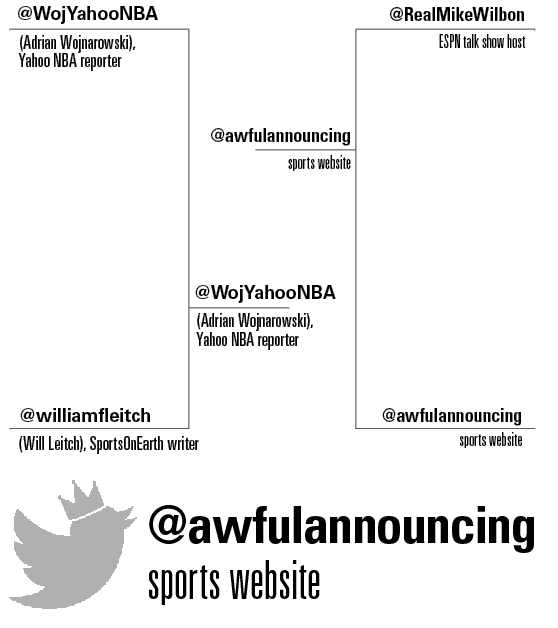 Here in the Twittournament Final Four, the most popular March competition since spring football, we have a variety of ways to reach the top.

You can be a reporter — Adrian Wojnarowski is. He knows damn near everything about the National Basketball Association, and he knows it first and he’s liberal with his knowledge, and Twitter is the main conduit for the dispersal of his information.

You can be a columnist — Mike Wilbon is. He’s a Northwestern graduate, sure, but he’s a Chicago homer, which earns him a good deal of cred. He and Tony Kornheiser highlighted the after-school sports intake of our youth, which came in the form of shows like Pardon the Interruption and Around the Horn.

You can be a writer — Will Leitch is. He graduated from Illinois, and while he’s not churning out tidbits of news or dropping holier-than-thou opinions like the previous two, he is an orbital component of the sports universe, weighing in somewhere in between, putting people and things through his own journalistic processes to distill a deeper meaning.

Or you can be a website that got popular by making fun of people who misspeak — Awful Announcing is. What’s that? Jonathan Coachman mispronounced “bulging disc”? #FrontPageNews, for sure. Matt Yoder’s site does provide a good chance for announcers to face the music. But it’s also just about the pinnacle of the Internet — a lot of usernames guffawing at other people’s mistakes.

Sure, quality reporting, quality commentary and quality feature writing has a place in this world, but Twitter isn’t it. Twitter is a place for rumors, ignorance and microblogging.

It’s the place for making jokes about events we’re all watching simultaneously, which is pretty much exactly what Awful Announcing does well. It’s the perfect place for those little “did that just happen?” moments in sports.

With Awful Announcing, you get a unique look at a very niche aspect of sports — announcing. Which is, after all, our main medium of experiencing the sport.

That’s not to say that Adrian Wojnarowski isn’t the No. 1 tweeting reporter of all time. Or that Mike Wilbon isn’t a columnist from Chicago or that Will Leitch isn’t a writer from Illinois. All these things are true. And they all make for great Twitter follows. We recommend them all.

Not to mention, they’re actually doing a very similar tournament of their own — Bristology — which is pretty meta  rationale for them succeeding in this tournament.

And in the realm of Twitter and the Universal Personality of the Internet, a little meta goes a long way.

Eliot is a senior in Media. He can be reached at [email protected] Follow him on Twitter @EliotTweet.