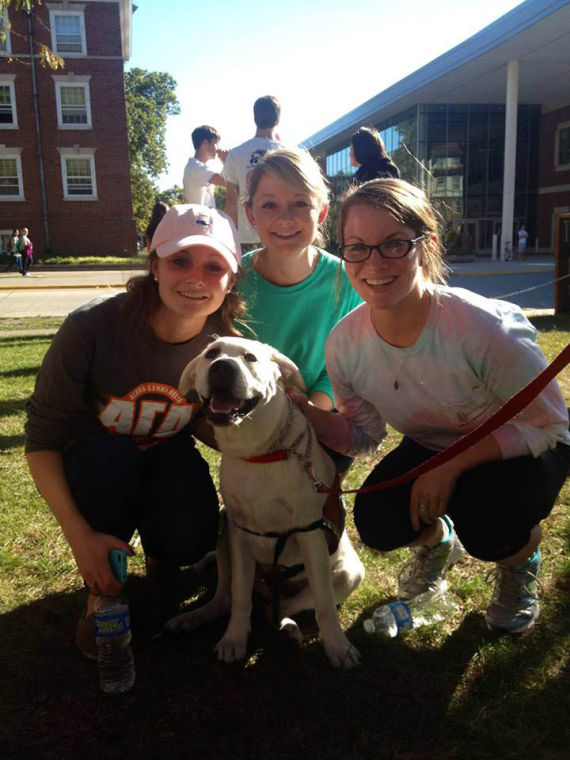 Shi-Ai members pose at their philanthropic event, “Pet-a-Pup for a Buck,” which took place last semester. Students could pay a $1 to pet a dog, and all proceeds went to the Illini Service Dogs student organization.

On Tuesday, the service organization Shi-Ai held its election for a new executive board. With the new board members set, Shi-Ai hopes to become a more well-recognized organization.

“We want to get our name out there and try to make Shi-Ai a more prestigious activity to be involved in,” said Julia Hector, VP external operations and Alpha Gamma Delta member.

The service organization was founded in 1908 at Northwestern University. Shi-Ai’s Alpha Sigma Sigma chapter was brought to the University of Illinois three years ago, after students traveled to Northwestern to do research at its chapter. The group, which is comprised of two women representatives from each sorority within the Panhellenic Council and two from each non-Panhellenic sorority, combines each chapter’s individual service goals with additional philanthropy to fully round out the community-service side of Greek life.

While Shi-Ai is technically a freshman and sophomore honorary, executive board members who are upperclassmen can still be involved in the organization.

The University’s chapter promotes philanthropy by hosting events and attending other Greek houses’ events. Its main philanthropy event last semester was called “Pet-a-Pup for a Buck,” which Shi-Ai co-sponsored with the social fraternity Theta Chi. At “Pet-a-Pup for a Buck,” students could pet a dog by paying $1, and the proceeds went to the registered student organization Illini Service Dogs. This year, Shi-Ai will be the sole sponsor of the event, which will take place in May.

Carrie Wainer, Shi-Ai president and Kappa Kappa Gamma member, said Pet-a-Pup has been her favorite experience with Shi-Ai so far because it has enabled her to spend time with her Shi-Ai friends as well as her Kappa Kappa Gamma sisters.

“It was nice seeing (my sisters) outside of the Kappa philanthropy and there to support Shi-Ai,” said Wainer, sophomore in AHS.

She said she was also moved by the unified support of Shi-Ai by the whole Greek community.

“It was amazing seeing everyone in one place, wearing their own letters,” she said.

Hope Camden, VP internal operations for Shi-Ai and 4-H House member, agrees that Pet-a-Pup was her favorite event with Shi-Ai.

“You get the chance to work with the dogs and see what all your fundraising efforts and organizational efforts go toward,” said Camden, junior in LAS.

Shi-Ai’s other main philanthropy event, which will take place in April, is “Campus Cleanup.” The group will partner with social fraternity Phi Kappa Psi for the event and spend the day picking up litter on campus, Wainer said.

At their bimonthly meetings, the women of Shi-Ai participate in and plan smaller philanthropic activities in addition to their larger ones, such as creating bookmarks for the Crisis Nursery in Urbana, participating in canned food drives, sending letters to war veterans, and writing letters to hospital patients.

Executive board members agree that since Shi-Ai has representation from every Greek sorority, being a member of Shi-Ai is also a good opportunity to meet women from other chapters.

“Joining a house can narrow your mind,” Wainer said. “It’s nice to meet girls in other houses with different interests.”

“I have met girls from outside my chapter who I wouldn’t have met otherwise,” said Hector, sophomore in LAS,

Efforts are also being made to further integrate Shi-Ai into Greek life, such as promoting Shi-Ai events within the Greek houses themselves, Wainer said. She added that another one of Shi-Ai’s goals is to become an official RSO.