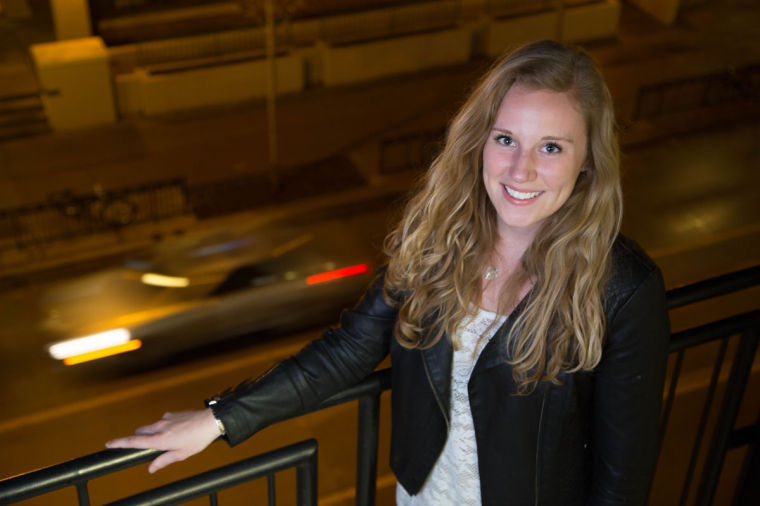 Natalie Pittman does not personally know the royal family. She does not enjoy a side of crumpets with her afternoon tea. And although she may be from the United Kingdom, she is not from London. The junior in LAS defies the stereotypes students often assume of her as a study abroad student and has instead joined one of the United States’ most notable college traditions.

Pittman knew that she loved the United States from an early age, having made many trips to her relatives’ home in Sarasota, Fla. When college rolled around, she knew that she wanted to study American culture. Naturally, Pittman chose American studies as her major. Pittman explained her major as being the literature, history, politics and sociology of the U.S.

“I chose American studies because it’s multi-disciplinary and I can use the degree to enter any career path, because in England you can get a degree and pretty much go into any career you want,” she said. “It’s not a straight and narrow path, so I could go into business with my degree if I wanted. It opens up quite a bit of doors, so that’s why I chose it.”

She later learned that her degree requires her to study abroad in the U.S., so last fall she flew from her U.K. school, Swansea University, to attend the University for her junior year.

“My institution back at home has a partnership with U of I, but also several other schools in the U.S. I chose U of I because it fares really well academically,” Pittman said. “And of course, I heard the school likes its share of parties, so I was in.”

“I love how everyone is so close with each other. I can walk to class and bump into six or seven friends on the road. Back home, my school is only 14,000 people and I could go to every class and not bump into anyone I know,” she said. “It’s really, really strange, I know. I love how students create this community here.”

Pittman’s sorority, Alpha Chi Omega, is like a home away from home for her; however, she admits her choice to rush was completely random.

“I lived in Barton before I moved into the house, and the girls and I on my floor got really close. I didn’t know anything about Greek life, but we all agreed to try it,” she recalled. “I ended up choosing Alpha Chi Omega because the girls in the house were very laid back, chill and just seemed like they knew how to have a good time.”

One of the hottest topics of conversation with Pittman’s friends back home is her being in a sorority and Greek life in general.

“I’ve been telling a lot of my English friends back home about Greek life, and they still don’t really understand it,” Pittman said. “There’s a lot of people from my University that will be coming here next year, so I’m trying to convince them to rush and join a sorority too.”

Her friends’ confusion stems from the fact that in the U.K. there is no official Greek system set in place at the universities.

“In England, they don’t have Greek life, so that’s why I was so confused about it when I first arrived here. We don’t have fraternities, sororities, anything. When I chose U of I, I didn’t know that it was such a huge part of the school,” Pittman said. “Looking back, I remember we had someone talk to us about U of I back home, and she mentioned that the University had a big Greek life. I remember looking around, and no one knew what this ‘Greek life’ was.”

Having been born and raised in Burghfield, a tiny village near London with a population of just over 5,000 people, Pittman has never had the chance to become entirely accustomed to such a diverse student population. But in spite of her hometown’s lack of cultural diversity, her sorority sisters’ cultural and ethnic diversity has become one of her favorite aspects of Alpha Chi Omega.

“Even though my sisters and I are all in the same house, we’re all very different and unique, yet get along really well,” she said. “It’s such a random selection of people, but it’s awesome that we have so many girls from so many different backgrounds.”

While school and her sorority take up most of Pittman’s time, she still finds opportunities to do one of the activities she loves most: traveling.

“I love traveling, and I do it quite a lot at home. In America, you can just rent a car and travel between states, which to us English seems like different countries because each state is so distinctly different.”

Pittman has traveled a number of places in the U.S. already, including Florida, Washington, New York, Kansas and Massachusetts. Once the school year ends, she plans on visiting the states that make up the Deep South.

Although she said that she feels more at home at the University, she is still getting used to one change.

“Having a roommate was definitely a difficult adjustment to make. In England, we don’t have roommates. We have our own room throughout the whole four years of college,” she explained. “Moving into the house, I moved in with my best friend Sarrah, and we get along really well, but it was just a huge adjustment having to actually live with someone and share a room, something I just hadn’t done.”

Sarrah Spohnholtz, Pittman’s roommate and freshman in DGS, first met Natalie the week after they found out they would be joining the same sorority.

With Pittman’s tall, slim frame; strong, feminine cheekbones; and thick, blonde curls that frame her face, she does not look too different from the other girls in her sorority. However, the minute she opens her mouth and begins to speak, the difference between her and her sorority sisters becomes clear.

Spohnholtz believes that it is more than Pittman’s obvious foreign accent that sets her apart from other sorority girls.

“She is not judgmental whatsoever,” Spohnholtz said. “There’s this stereotype that Greek life is just made up of a bunch of judgmental people, but Natalie is definitely the furthest thing from that.”

Ruby Daly, one of Pittman’s sorority sisters and sophomore in DGS, agreed that Pittman is refreshingly open-minded in a world that at times seems dominated by snap judgments.

“She’s a good, honest person,” Daly said. “She’s different from so many girls in the fact that she’s open to anything and anyone.”

With the school year winding down and only half a semester of classes left, Pittman will soon have to pack her bags — albeit begrudgingly, she admits — for a flight back to the U.K.

“I already know I’m going to be so terribly sad the day I actually have to pack up and leave. It’s going to be an awful adjustment, going back home. If I could stay, I really would, but you can count on me coming back to visit,” Pittman said.

Despite having to leave, Pittman said she is grateful for every skill the University has helped her achieve, most importantly the newfound confidence she’s gained by living here.

“Now that I’ve been here, I feel like I can now go off and do anything I want,” she said.