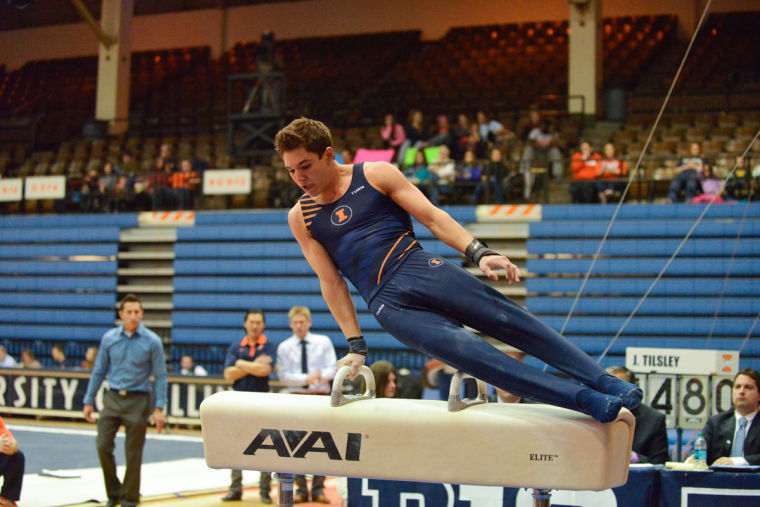 For the Illinois men’s gymnastics team, the pommel crew, as they like to call themselves, goes beyond being one of best components in the fifth-ranked Illini lineup.

Most gymnasts on the team compete in multiple events in each competition and have to spend practice time preparing accordingly. Sophomore C.J. Maestas competed in five of the six events during the Big Ten Championships two weekends ago. The one event he was not a part of was the pommel horse.

Pommel horse is a very specialized event and unique in that most of the athletes who have competed on the event for the Illini this season solely compete on pommel horse or are doing just one other event.

Because the lineup has been so consistent throughout the year, the five gymnasts have become very close with each other.

Every practice, they spend two hours working with each other in the back corner of Kenney Gymnasium, separate from the other gymnasts. This atmosphere has provided them with the opportunity to push each other every day, also allowing them to grow with each other and develop strong friendships.

“With the season winding down, we have been together for a very long time and have developed great friendships, hanging out inside, as well as, outside of the gym,” Bradley said.

The lone freshman of the group, Matt Foster, came into the Illinois program this year after competing in every event for the junior national team. After injuries early in the season, he was relegated to solely competing on the pommel horse. This has been a blessing in disguise for Foster, who has won three titles this season and set a career high of 14.950.

“The older guys have taken me under their wing and have really helped my confidence a lot,” Foster said. “You have five people together as family.”

Foster emphasized the pressures of competing in one event during each competition and having only one opportunity to go out and stick your routine. He said the older guys have coached him through how to attack the competition, whether he needs to go into his routine conservatively or aggressively, depending on the situation.

“We have done everything we could this year to prepare for these situations, starting with pressure sets,” Mason said.

In a sport like gymnastics, where one mistake can ruin an individual score and the team’s chances of placing well in that event, perfection and handling the pressure is key.

“These guys have stepped up in a sport of perfection with only one opportunity to perform,” head coach Justin Spring said.

During practice, the team will yell as loud as it can in an attempt to distract the gymnast performing his routine on the pommel horse and to recreate pressure situations. Despite not accounting for the nerves that play a huge role during competitions, this exercise goes a long way in putting them in an uncomfortable situation while performing.

Not only does the “pommel crew” compete against other teams, but also against each other. As competitors, each gymnast strives to be the best on the squad.

“We have continually made progress with our scores, so you kind of put pressure on the person in front of you and the person behind you to perform,” Bradley said.

The bond these five gymnasts have created has allowed them to flourish as a unit this season, accounting for five victories, 20 top-five finishes and four career-highs on the season.

Despite being in the corner of the practice gymnasium every day, the pommel crew brings enough energy to inspire the whole team.