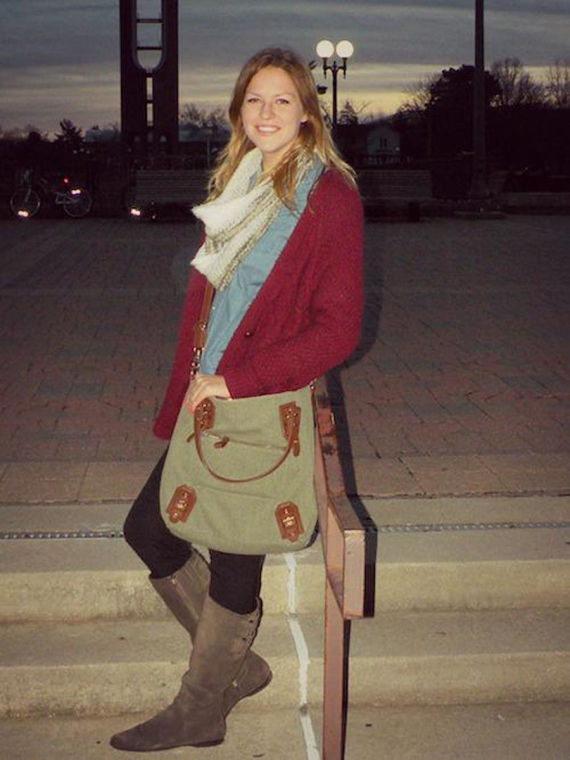 Sophomore Anna Kaszuba is working toward making a difference in sexual assault awareness on campus through her involvement in FYCARE and the Greek Committee for Sexual Assault Awareness Month.

Anna Kaszuba, sophomore in LAS, became involved with sexual assault awareness on campus after attending a FYCARE seminar during her freshman year. The class acted as a catalyst for Kaszuba’s work, and after attending, she took a class to become a facilitator.

“I like educating people and opening their eyes about what they can do to help,” Kaszuba said. “I want to get fringe groups involved. You can’t convince people to go to Zerlina Maxwell’s (a speaker coming to the University on behalf of Sexual Assault Awareness Month) talk. That’s why we go to bars and Greek houses to talk about party rape.”

During her FYCARE course, Kaszuba wrote a research paper on party rape in which she explained the seriousness of the issue in the college scene. It is students’ responsibilities to protect their peers from potential harm, and if they are educated more about the dangers at parties, they will be more willing to take action, she said.

“When I see someone drunk, it always gives me anxiety. … Don’t be a bystander,” Kaszuba said.

As a member of the University’s chapter of Alpha Delta Pi sorority and the leader of the Greek Committee for SAAM, Kaszuba works with the Women’s Resource Center Assistant Director Molly McLay, who was also Kaszuba’s FYCARE class instructor, and Stephanie Ames, advocate at the Rape, Advocacy, Counseling and Education services center.

“Anna has really immersed herself with passion,” McLay said. “She presents really well. She always has a lot of ideas and is really vocal. She gets others engaged.”

One of Kaszuba’s favorite memories with FYCARE was when she participated in a survivor and supporter panel.

“It’s eye-opening to have a one-on-one talk with classmates and going a little further than just raising your hand in class,” Kaszuba said.

Kaszuba used her connections in the Greek community to start the Greek Committee for SAAM in February and encourage her fellow fraternity and sorority members to attend meetings.

“A fond memory is my first SAAM Greek committee meeting. I was blown away at the response from the Greek community that wanted to be a part of this cause. Twenty-five to 30 people showed up and everyone was so excited to get started on work for the month. I was truly stunned,” Kaszuba said.

Kaszuba started the SAAM Greek committee due to the number of bodies available to help the cause.

“We needed fighters, volunteers, people who care … so I reached out to my own community,” Kaszuba said. “Greeks are a big part of the Champaign-Urbana community, classroom settings and even bar scenes, so who better to educate and act as leaders in this movement against rape culture? We act as volunteers for all SAAM events, so if anyone ever needs help setting up, we give them the manpower needed to support the event.”

SAAM Greek committee worked extensively with “Walk A Mile,” creating T-shirts, publicity campaigns and social media networking and partnered with Fraternity and Sorority Affairs to make the event bigger and better. On Friday, April 11, men walked up and down the quad in high-heeled shoes to simulate what it’s like to “walk in a woman’s shoes.”

SAAM Greek committee is also working with Amnesty International for their next big event, “SlutWalk.” The committee set-up a bar initiative in which they provided bars on campus with wristbands and stamps which contain anti-sexual assault messages. The SlutWalk, which various organizations including Amnesty International will be sponsoring, will be held Thursday on the Main Quad at 5:30 p.m.

According to Christina Ruiz, Amnesty International president and senior in AHS, SlutWalk is a march that began in response to a Toronto cop telling students at York University that the best way to avoid getting sexually assaulted was to not dress like a slut.

“Victims of sexual assault should never be told that it was their fault, but unfortunately, slut-shaming is disappointingly frequent, and no rape survivor will make it though recovery without at least one person judging them,” Ruiz wrote in an email. “SlutWalk is a way to show solidarity and to reclaim the word ‘slut,’ which is used to make us pit ourselves against each other and to excuse the sexual violence that happens every day.”

Ames said that all of the projects and activities planned out for SAAM are showing survivors support.

“(Sexual assault) is a massive problem,” Ames said. “The culture is complacent. People don’t want to talk about it. ‘It’s not my problem.’ We’re asking people to challenge rape culture and show survivors support, to let people know they’re not alone and that the community supports them.”

GLASS (Greeks Learning Alcohol Safety) is a program that Kaszuba feels will educate Greeks on alcohol abuse and party rape. GLASS will teach Greeks about campus alcohol and drug resources, how to intervene in situations of risk and signs of alcohol poisoning, among other related topics.

“It’s telling people that this could happen in your chapters. What can you do to help?” Kaszuba said.

Kaszuba and McLay both agree that University students need to become leaders when it comes to speaking out against sexual assault.

“We’re all part of the same community. We walk the same streets, go to the same stores. We have to look out for one another,” Kaszuba said. “The only way this violence will end, is if we stand up together and fight back. We must stop ignoring what is going on around us and take responsibility for the community we are a part of. Student power is infinite and could change the world if only it is put to use.”