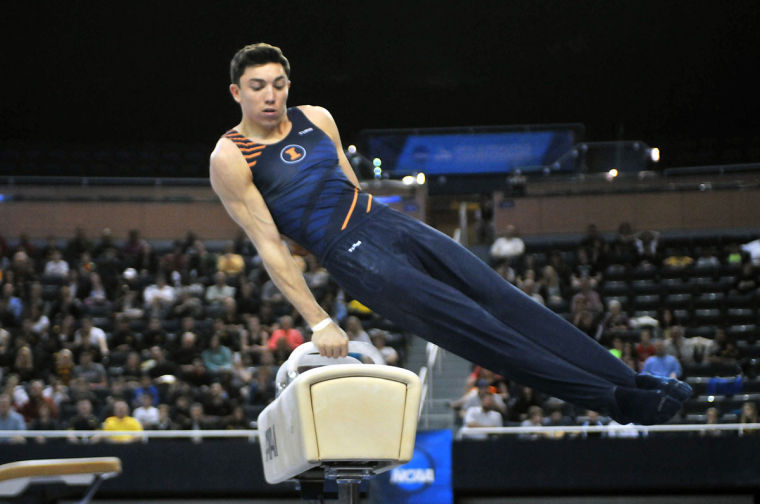 Illinois’ Chad Mason performs his pommel horse routine at the NCAA national championships in Ann Arbor, Mich., on Saturday. As a team, the Illini finished fourth out of six teams.

Illinois junior Jordan Valdez rose to the occasion, bringing home the NCAA high bar title after competing in the national championships in Ann Arbor, Mich., over the weekend.

The Illini, who finished fourth as a team on Friday night, still had high aspirations heading into the individual part of the championship on Saturday night.

The team qualified six gymnasts to the event finals and came out with nine new All-Americans, including three athletes placing on multiple events.

Valdez, who has been on a roll all season, scored a 15.525 on high bar, which gave him the victory by half of a point. Despite providing him with his national title, this was only his third-highest score of the season. He is the first Illini to bring home the high bar title in the last five years.

“I’m still speechless,” Valdez said in a press release. “It hasn’t sunk in yet. I’m just waiting to wake up and still be standing at the chalk blocks waiting to start my routine.”

Valdez also added a fifth place finish on parallel bars with a score of 15.100.

The accomplishments didn’t stop there for the Illini. Junior C.J. Maestas added three All-American qualifying finishes of his own. Maestas was the runner-up on rings, placed third on floor and also qualified on the all-around. He was still not completely healthy, but finished right behind the top gymnasts in the country. Maestas tore his tricep and missed all of the 2012-13 season. The injury has continued to bother him this season.

Freshman Chandler Eggleston also had a stellar night for the Illini, placing second on both vault and floor with scores of 15.225 and 15.400, respectively. He was beaten out by a combined half a point on the two events.

“It was an outstanding finish to a really great weekend,” head coach Justin Spring said. “The guys that earned their way into finals certainly proved that they deserved to be there. Everyone finished strong and finished well.”

Valdez, Maestas and Eggleston were the strongest gymnasts all season for the Illini and proved it once again on Saturday.

The Illini, who had high aspirations coming into the season — both as a team and individually — put all the past struggles behind them this weekend. The fourth place finish on Friday night maybe was not as high as they had originally hoped, but the fact that they were right in it to the end meant a lot to the team.

Only one of the six Illini who brought home All-American honors will be graduating this year putting the team in a great position to have a solid performance in the championship once again next year.