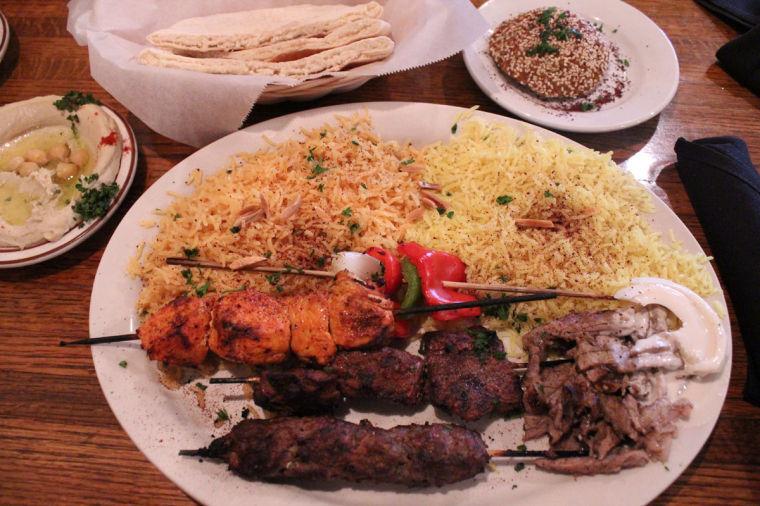 The Layalina Mixed Grill from Layalina Mediterranean Grill, with hummus, pita bread, and the stuffed falafel.

Sitting on the corner of First Street and Springfield Avenue, Layalina Mediterranean Grill does not overtly demand attention, yet it is inviting nonetheless. The interior is dimly lit with wooden tables and booths filling the open room and Middle Eastern decorations lining the walls.

A popular menu item is the Layalina Mixed Grill, a dish consisting of three skewers of ground beef and lamb Kufta Kabob, Chicken Shish Tawook and a beef or lamb Shish Kabob. The skewers sit alongside a side of rice and grilled vegetables. The dish also includes hummus and baba ghanouj with pita. Baba ghanouj is generally the same thing as hummus except it is made with eggplant instead of chickpeas.

The spices and sauces add an enticing aroma, a scent that carries throughout the restaurant. The portion size can easily be good for two. Customers have the option to carry out or dine-in at the restaurant during its open hours from 10 a.m. to 10 p.m. every day.

Layalina is a family-owned Mediterranean and Middle Eastern restaurant that has grown to attract many students and families in the Champaign-Urbana area, Ruba Alarian, head waitress at the restaurant, said. Popular menu items include the Layalina Mixed Grill, which is priced at $16.99. Customers can add a stuffed falafel to the entree, which is a large falafel stuffed with almonds, onions and sumac.

Abed Saleh, manager of the restaurant, said his father and uncle came up with the idea of Layalina because they wanted to take advantage of the general lack of Middle Eastern restaurants in Champaign.

The restaurant gets its spices — like paprika, cumin, and others — from various locations in the Middle East. Saleh said the olive oil is from his grandmother in Palestine, who grows olive trees at her home. However, the meat is grown locally.

“In Muslim tradition, meat has to be halal,” Alarian said. “It has to be fresh.

We go to a Muslim farmer, who kills the animals in a specific way. You point the cow toward Mecca, which is where we pray to, and he has to slaughter the cow at once with no torture. He also says what you say to convert to Islam at the same time.”

According to Alarian, the restaurant is typically busy with around seven to eight tables during peak hours on weekdays and up to a full house on the weekends.

As for the cuisine, people have many different reasons for eating it.

“For me personally and my friends, they want a taste of home. For people who are not Arab or Middle Eastern, they want to try something new,” Alarian said. “Some people have tried Middle Eastern food somewhere else like New York, and they’d like to have it again.”

Rory Durkin, a resident of Champaign, has been to Layalina about three or four times. He said he has liked everything he has had, such as the falafel and the schawarma sandwich.

He spends his mealtimes at Layalina because “there are not really any other Mediterranean restaurants in the area.” It is true that the Champaign-Urbana area only has a few, including the Jerusalem Restaurant and Casablanca Kabab House in Campustown.

For Durkin, the food is familiar, yet the spices and flavoring provides a new experience.

“My family on my mom’s side is from Greece, so we use the same idea of meats and rice and vegetable mix, but they use completely different spices.”

According to Durkin, the variety of food at Layalina is always good. If a menu item looks appealing, he said, it probably will be delicious.