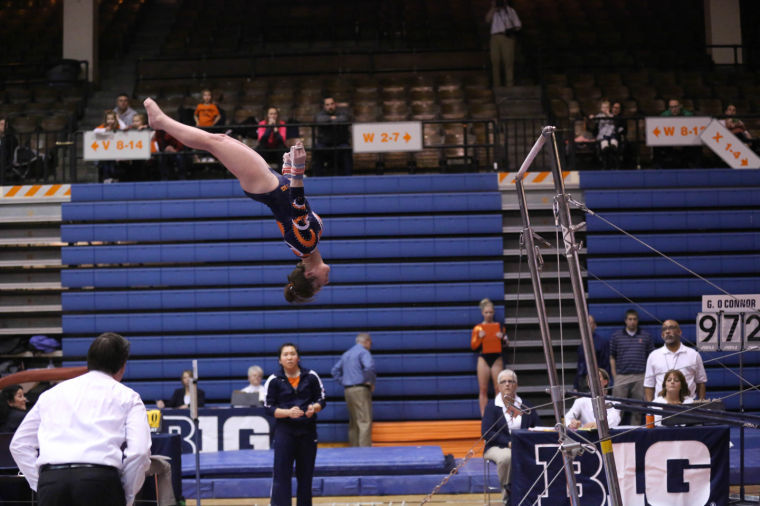 Illinois’ Elizabeth McNabb performs her uneven bars routine during the meet against Michigan at Huff Hall on Feb. 7. The Illini lost 195.800-195.575.

Perfection is difficult to achieve, and it’s for that reason judges don’t give perfect 10s in gymnastics meets often. This makes things very limiting, but head coach Kim Landrus knew her Illinois women’s gymnastics team could take the pressure and be pushed to its limits. She knew from the start this team was a special one.

When asked why she felt the team was a special one, Landrus said, “It’s just a feeling. They have great heart, great drive, great determination. It’s a nice blend of youth and experience. The seniors have — every single year — they’ve really matured and gotten better and grown not only as athletes, but as people.”

Landrus wanted to push her gymnasts to their limits, but so far, the Illini have proved there aren’t any. This current Illini gymnasts have cemented their names in the record book, whether it be as a team or as an individual.

As the gymnasts like to say, they’re truly limitless; however, that idea was present before Illinois’ season even began.

At the start of each season, the gymnasts choose a word as a theme for the upcoming season. It doesn’t need to begin with the letter I, but the letter has to be present in the word. This year’s team decided on the word limitless.

“In our locker room, we have a bunch of different inspiring words that are on the different panels of our ceiling, and limitless is the word that’s above my locker,” senior Elizabeth McNabb said. “I just kind of saw it when we were coming up with the words, and as a team, we collectively came up with a bunch of different options and then kind of talked and voted on it together.”

As Nationals approach and reflections take place, the Illini have realized they’ve made so much history that they’ve lost track of it.

For the team it began very early on at its season opener in East Lansing, Mich.

Illinois opened its season Jan. 10 with a 195.325-194.150 win over Michigan State. It marked the highest season opening score in program history, as the Illini had never scored above a 195 to begin the season.

Things slowly improved from there, despite close losses to Minnesota, Michigan and Penn State.

At the State of Illinois Classic on Feb. 21, senior Amber See assisted the Illini in earning their highest vault team score in program history, a 49.425, with her perfect 10. See’s perfect score was just the third one from an Illini gymnast in any event.

One record-breaking moment that stands out among the rest, though, is when the team set a new all-time team high score against Lindenwood on March 8. Not only was the 197.100 the first 197 of the season, but it was also the first one in program history.

All season long, the Illini spoke of how they had the capability of achieving a 197, but they kept coming up short. So when it finally happened, it was, as junior Jordan Naleway put it, “super exciting.”

The all-time high score also happened to occur on senior day. When McNabb and fellow senior Sarah Fiedler were asked to reflect on their careers up to that point, both gymnasts said achieving that 197 was their favorite moment of their Illinois gymnastics careers.

From there, the current Illini gymnasts became the first group to make it to the evening session of Big Ten Championships, a goal they had set at the start of the season. They finished fourth overall to earn a No. 2 seed at the Minneapolis Regional, where the Illini punched their ticket for a second-straight Nationals appearance.

“Definitely my favorite (moment) so far was at Regionals when we were waiting for Minnesota to finish up on floor, and we had already gotten done with beam,” freshman Mary Jane Horth said. “We realized that we had made it to Nationals for the first time back-to-back. That was definitely the most exciting part of my Illini career so far. Everyone was crying. It was really a special moment to share.”

This limitless season has nearly reached its end, but the gymnasts know a season of tough practices allowed them to continually break records.

“Making Nationals back-to-back was definitely a goal, so it’s so cool that we’ve been able to meet it,” Naleway said. “But I know that we were able to meet it because we’ve worked so hard in preseason and so hard this season.”

This team’s success didn’t come without a great deal of individual success.

Several gymnasts have broken and set new career highs on their respective events. Fiedler added to the success on senior day with her first all-around title.

Freshman Erin Buchanan became the third Illinois gymnast to be named Big Ten Freshman of the Week on Jan. 20. This came after the Illini’s home-opening, tri-meet win, where Buchanan scored a 9.925 on floor to take home the title, the first of her career. She would go on to earn this conference honor two more times, the most times any Illini gymnast has done so.

On Feb. 15, another freshman, Emily Lennon, earned the honor of Big Ten Freshman of the Week after winning her first title by placing first on the balance beam with a 9.900 against Penn State.

This combination of Buchanan and Lennon was the first duo in not only program history, but school history, to have both earned the honor in the same season. For Buchanan to have been a part of so many accomplishments in her freshman season is “unbelievable.”

“I really couldn’t have asked my freshman year to be any better,” Buchanan said. “Inside the gym, it’s been wonderful, and to come in and have such an amazing experience right when I start is everything I could ask for.”

For another freshman, Mary Jane Horth, the limitless mentality wasn’t just applied to gymnastics events, but also to her comeback to gymnastics itself.

Last May, Horth suffered an Achilles tear that prevented her from completing her final Junior Olympic season as a Level 10 gymnast, the last level before being considered elite. It was uncertain when she’d make her way to the lineup, but Horth was able to make her debut at the State of Illinois Classic. Since then, she’s been a staple in the uneven bars and balance beam lineups.

“It’s definitely been a whirlwind of a year,” Horth said. “Coming in, I didn’t know it was going to happen, but I’m really excited that I was able to be a part of lineup and part of this team making it to Nationals. It’s really exciting, and it was a lot of mental toughness. My teammates were so supportive, and my coaches were so supportive. The medical staff worked really well with me to get me back, so I’m thankful for that.”

Horth’s comeback has been a factor in Illinois’ more recent success, but it was still achieved as a team. It has been everyone’s effort that’s allowed the Illini to get so far. They were the ones who chose limitless to describe the season. The coaching staff had nothing to do with it. It’s all on the gymnasts, and it’s their own work that’s allowed them to actually be limitless.

“I think that says a lot that, that was a word they came up with,” Landrus said. “They had big goals this year, and they kept pushing. They knew that there were so many things they could strive to achieve as far as the evening session, No. 2 seed and back-to-back appearances. It’s been nice to see that all of their hard work has really paid off.”

The No. 11 Illini are set to show off all the work they’ve put in throughout the season at NCAA Championships against 11 other teams this weekend.

The past three times Illinois has competed at Nationals, it has not placed in the top 10. The goal this weekend to make even more history by becoming the first Illinois team to make it into the top 10. With the mind-set the gymnasts have had all season long, there’s no doubt they can achieve yet another goal.

“Those things are possible when you see yourself as limitless,” Naleway said.