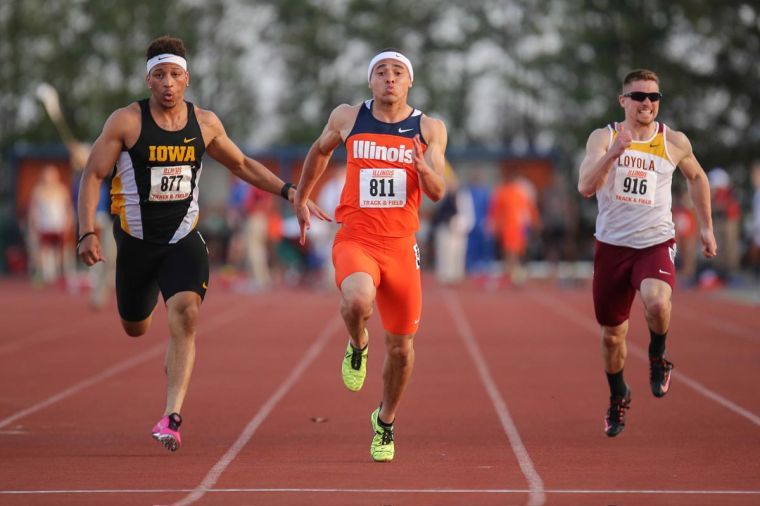 Illinois’ Brandon Stryganek runs the 100 meter dash during the Illinois Twilight Track and Field meet at Illinois Soccer and Track Stadium on April 12.

With one of the biggest meets of the outdoor season coming up next weekend in the Drake Relays, the Illini men’s track and field team split up this weekend to run two different meets with two different purposes. The top Illini distance runners traveled to the Mt. San Antonio College Relays in Walnut, Calif., a fast and competitive meet to try to hit NCAA Regional qualifying times. The rest of the team traveled to the Bluegrass Classic hosted by Kentucky. Many athletes ran events they don’t usually compete in and the team shook up the relay squads.

Head coach Mike Turk said part of the Illini’s approach at the Bluegrass Classic would be to not overload athletes, as some athletes will be entered in several events trying to score points at Drake Relays. Athletes ran in events different from the norm. Vanier Joseph, after running the nation’s fastest time this season in the 110-meter hurdles, ran to a seventh-place finish in the 100 meter dash. DJ Zahn, who usually runs the 400, cut down and ran the 100 and 200, finishing 5th and 2nd, respectively.

“We gave DJ a meet off from running the 400, and he responded with a terrific 200 into a slight headwind,” Turk said in a press release. “DJ probably would have beaten him if the race was a meter further.”

The relay lineup was also mixed up this weekend. The 4×100 meter relay team of Julian Smith, Brandon Stryganek, Stephon Pamilton and Zahn was altered to lighten Pamilton’s workload. Fuad Akinbiyi ran in his place and the team finished first in 40.40 seconds.

Illinois has spent the season looking for two other runners to fill out the relay team with Pamilton and Zahn. It was Kendizera’s and Zebe’s first time on the relay since the opening meet of the outdoor season and Watkins’ first appearance on the team this outdoor season. Another new lineup this week makes the Illini’s 4×400 situation even more muddled.

“Once Drake’s over … we’ve got to try to start figuring out who we’re going to run,” Turk said. “We’re going to keep working that out and see what we can get.”

Athletes that ran their normal events turned in strong performances. Pamilton won the 400 by more than half a second. Viney finished second in the 400-meter hurdles, missing first place by 0.05 seconds as he was out-leaned at the line.

There were also some strong performances on the field side. Brandon Noe finished second in the discus behind Kentucky’s All-American Andrew Evans. Turk spoke highly of Noe’s performance.

“He didn’t throw real well in the prelims. In fact, it was his worst three throws of the year. However, he put it together on his first two throws in the final and moved all the way up into second place. That kind of performance takes a high degree of concentration and, more than anything, confidence,” Turk said.

The throw squad also put together a solid performance in the javelin. Three of the event’s top six throwers were Illini. Pole vaulter Cody Klein impressed as well, winning the pole vault by 0.1 meters with a vault of 5.30 meters. His vault marked a new personal best from last year’s NCAA Regional and was more than 0.3 meters ahead of his performance at the Twilight Invite last weekend.

“Cody has struggled since his injury indoors. We’ve talked about cranking up the intensity as his senior season winds down,” Turk said. “It’s a great time for him to put it together.”

The Illini found some success at the Mt. SAC Relays. The team sent its top distance runners to the meet, hoping to run fast times in order to qualify for NCAA Regionals. It’s popular in Divison I track for athletes to try to hit qualifying marks in meets out west in California, where the weather isn’t much of a factor.

Jannis Toepfer finished fifth in his heat of the 10,000 meter run, running a 29 minutes, 13.07 seconds that would have garnered him a top-10 seed in last year’s NCAA West Regional. His teammate, Jordan Herbert, ran in the event at Regionals last year and clocked a 30:02.52. In the 5,000 Ian Barnett ran a second off of his qualifying time from last year with a 13:59.65. Liam Markham and Graham Morris ran times that would have qualified them for Regionals last year, with a 3:42.33 and a 3:46.22, respectively.

“After we had such a big weekend at home last week, and with Drake Relays next week, I was concerned about us keeping up the intensity this weekend,” Turk said. “The guys stayed focused and put forth a great effort.”