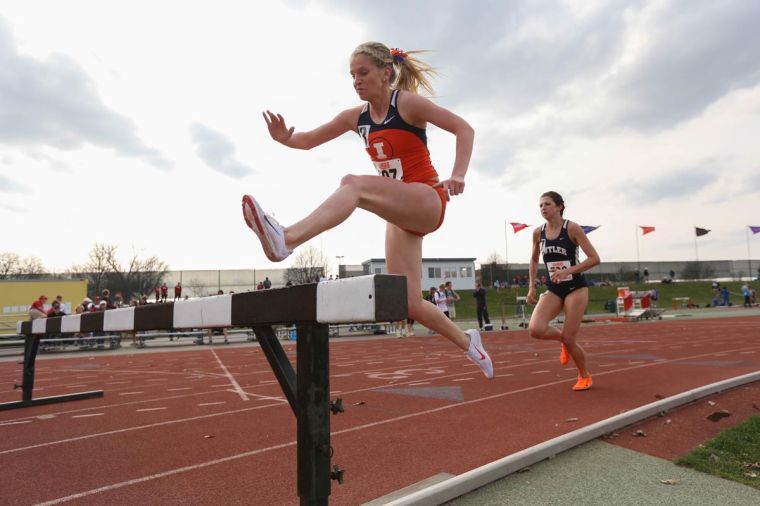 The Illinois women’s track and field totaled four top-five finishes at the LSU Alumni Gold meet Saturday. The Illini were up against a field that included three teams ranked in the top-10 nationally.

With numerous members of the team taking the week off in preparation for Drake Relays next weekend, the Illini used this week for development and technical work.

“Right now we’re not worried about scoring points,” head coach Ron Garner said. “We’ve had some people redshirt and some things not go our way, so right now our main focus is making sure everyone is working on their individual goals and competing to the best of their ability.”

Though the team only sent 14 athletes to Baton Rouge, and while winning the meet wasn’t a priority, the Orange and Blue represented well.

Leading the way for the Illini was Britten Petrey. The sophomore started the season with three consecutive victories in the 3,000 meter steeplechase, but switched over to the 1,500 meter run this weekend. She finished second with a time of four minutes and 26.62 seconds. This was 20 seconds better than Petrey’s previous best performance in the event.

Another strong performance came from Ahlivia Spencer. Spencer competed for the first time this outdoor season and finished third in the 800 meter run with a time of 2 minutes, 7.40 seconds. Spencer’s performance is currently the third-best mark posted in the Big Ten conference this season. With the Big Ten Outdoor Championships a few weeks away, Spencer will be looking to position herself with a strong seed time in hopes of defending her conference crown. In addition, junior Chloe Schmidt finished sixth in the 800.

The last top-five finish of the day for Illinois belonged to junior thrower Mariah Smith. Coming off a performance last week where she threw for 166 feet in the discus, the third-best mark in school history and currently the best in conference, coach Garner was eager to see what Smith would do as a follow-up.

Smith finished fourth with a performance of 159 feet. For Smith, it has been all about consistency.

“The talent for Mariah has always been there,” Garner said. “Sometimes her nerves get the best of her, but it’s important for Mariah to string together strong performances back-to-back if she wants to make a splash on the national stage this year.”

Rounding out the scoring for the Illini was senior sprinter Jesica Ejesieme who finished seventh and eighth in 100 and 400 meter hurdles, respectively.

The Illini will compete next when they travel to Des Moines, Iowa, this weekend to compete in the Drake Relays. The Drake Relays, always a highly-touted and competitive meet, will give the Illini a taste of championship-like competition.

“We’re really excited for the Drake Relays,” Garner said. “Our athletes have had time to rest up and address their individual needs. N=ow it’s time for them to compete at a very high level against some of the country’s best.”

Mubarak can be reached at [email protected] or @justmubar.