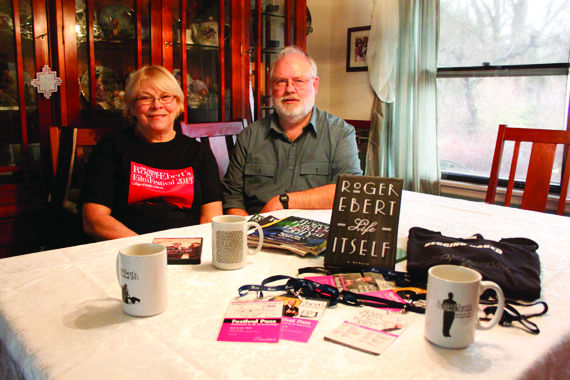 Diane and Gary Stensland of Urbana showcase their memorabilia from past Roger Ebert’s Film Festivals. Together, the couple has attended 12 Ebertfests and plan on attending this year’s Festival.

In Diane and Gary Stensland’s Urbana home, stacks of books with topics ranging from Abraham Lincoln to weather are found in every room, and photographs of their family, friends and travels paper the walls. Diane and Gary are just shy of 70 years old, and these items tell the story of their life.

One part of their story sits on their dining room table. Festival passes, programs and mugs from the Roger Ebert’s Film Festival cover Diane’s floral tablecloth. Collectively, the Stenslands have attended 12 Ebertfests.

Gary, a retired research scientist for the Illinois State Water Survey, began attending the festival in 2002. In the beginning, he says he did not know a lot about movies but realized he could learn a lot about film by going to Ebertfest.

“Once I got in there and saw it, I was hooked,” Gary says.

One aspect that Gary says draws him back to the festival each year is the accompanying academic panels and workshops. Through these sessions, Gary says he has learned about the financial and operational parts of film, such as how a movie is distributed.

“If you spend millions of dollars making a movie, how do you convince theaters to show it? I learned that if movies got in the key New York City and Los Angeles theaters they had it made.”

In 2005, Gary persuaded Diane to join him at Ebertfest. She, too, says she was immediately “hooked.” She says she enjoyed seeing movies that she would have never gone to if not for Ebertfest and learning about their background.

One of the most memorable festival moments for Diane, a retired U.S. Postal Service mail carrier, was in 2006, when she saw “My Fair Lady.”

Diane says that the movie played on a screen with 70 millimeter film, which brought out every detail, like the dresses and hats.

“Oh!” she sighs, closing her eyes and tilting her head back with a wide smile. “It was a beautiful, stunning movie.”

Every year, Diane also enjoys standing in line before each day of the festival.

At Ebertfest, attendants pick their seats in the order they were standing in line, and can try to keep the same seats for the entire day. For the Stenslands, it is important to get there early, especially since Gary likes seats that are on the right side on the aisle.

“There are always at least four people ahead of me. It wouldn’t matter if I came at 6 in the morning, I think they would be there,” she says with a laugh.

Because Gary often spends festival mornings at the workshops, Diane says she passes the time by talking to other people in line.

Through that, the Stenslands say they have made friends, such as a couple from Ohio who coincidentally worked with Diane’s cousin.

“We find the conversations we have interesting and quite different because we don’t have another group that talks about movies.” Gary says. “It is a unique group; they are articulate and intelligent.”

Once inside, Gary says he looks forward to all of the movies.

“I haven’t looked at the list (of this year’s movies) yet, but it doesn’t affect that I am going to go,” he says.

This year, Diane says she is anxious to see the first movie; a documentary on Roger Ebert called “Life Itself.”

This is the second festival since Ebert’s death. In 2008 when Ebert was not at the festival because of illness and last year because of his death, Diane says something was missing.

“I always looked forward to hearing him talk and introduce movies,” Diane says.

Gary agreed, saying that Ebert was very likeable and a knowledgeable, good speaker.

His goal for the film festival was to play movies that went unnoticed by critics and to bring the public together to appreciate them, and that’s exactly what it has done for the Stenslands.

Of all the films Diane and Gary have seen at Ebertfest, their favorite is “Departures,” a Japanese film about a cello player who lost his orchestra job and became an undertaker.

“In Japan, there is a special burial ceremony involved and the undertaker would dress (the deceased). It was so delicate and they would put the clothes on the body like a ballet,” Gary says. “The background cello music was special.”

Following the screening, Diane has ordered the film five times to give to friends and relatives.

All in all, both say they really enjoy every aspect of the festival. Diane even admires the lady who always moves the lectern on and off stage between movies.

At the end of the festival, Diane and Gary will bring home more film passes, programs and mugs to add to their collection. These items, like their books and photographs, will add to the story of their life. But more importantly, they will carry with them the friendships they’ve made and the appreciation of movies they’ve seen at Ebertfest.

That’s what Ebert wanted the Festival to be, and that’s what it has become.

Annabeth can be reached at [email protected].