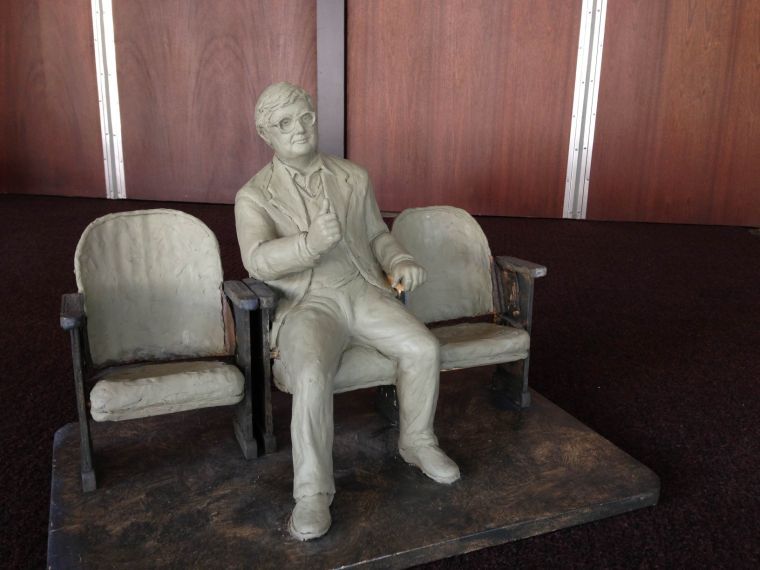 Roger Ebert spent just the first quarter of his life in Champaign-Urbana, but a statue of the late film critic will live forever just outside of The Virginia Theatre.

Announced in September, just five months after Ebert died from years of battling cancer, the life-size bronze sculpture depicts the Chicago Sun-Times critic sitting among three movie theater seats as he gives a signature thumbs-up. Sculptor Rick Harney designed it so that residents and Ebertfest-goers could pose with him in the seats on either side of him. Normally, when Ebert would review a film, he would sit on an aisle seat.

Originally, the statue’s price tag read $122,500, but it dropped by $10,000 when Champaign agreed to pay to light it and cover installation costs. The money will cover labor, materials and other dedication costs. Scott Anderson, who has led the funding campaign, said he’s received large donations from Ebert’s wife, Chaz, the Alice and Gene Lamb Foundation and director Martin Scorsese. Roughly 150 people or organizations have donated or pledged money, but Anderson said the project could still use more help.

“We hope the attendees think it’s a nice thing and get involved with it,” he said.

Champaign-Urbana residents are familiar with Ebert’s generosity. He set up the Roger Ebert Center for Film Studies at the University of Illinois’ College of Media and helped raise money to pay off the heavy debt of The Daily Illini, the student newspaper Ebert led as editor-in-chief in the early ’60s. And, of course, he began his film festival here to celebrate his favorite yet overlooked films through the years.

Anderson’s wife, Donna, originated the idea of bringing an Ebert statue to the area a few years ago because “it would be a wonderful thing to honor him,” she told The Daily Illini in September.

The project has brought together the Public Art League, the cities of Champaign and Urbana, the Champaign Park District and the College of Media, and it has elicited a welcoming support in the community.

Since the plan’s unveiling in the fall, not much changed in the design, Harney said. Ebert sits more upright and his right arm is slightly more raised than the original clay model. Harney estimates the 35 pieces that make up the completed sculpture weigh more than 1,200 pounds.

At the request of Chaz Ebert, Harney sculpted the Pulitzer Prize-winning critic to look as he did in his late 50s or early 60s, which is about how old he was when the festival began.

The spirit of the eponymous founder of Ebertfest will live on at the Festival, boosted by the statue’s presence, Anderson said, and it will serve as a reminder for what Ebert did for the community.

“Roger’s example of giving back to the community while persisting through huge health challenges is something to be emulated,” Anderson said.

Ryan can be reached at [email protected] and @ryanjweber.