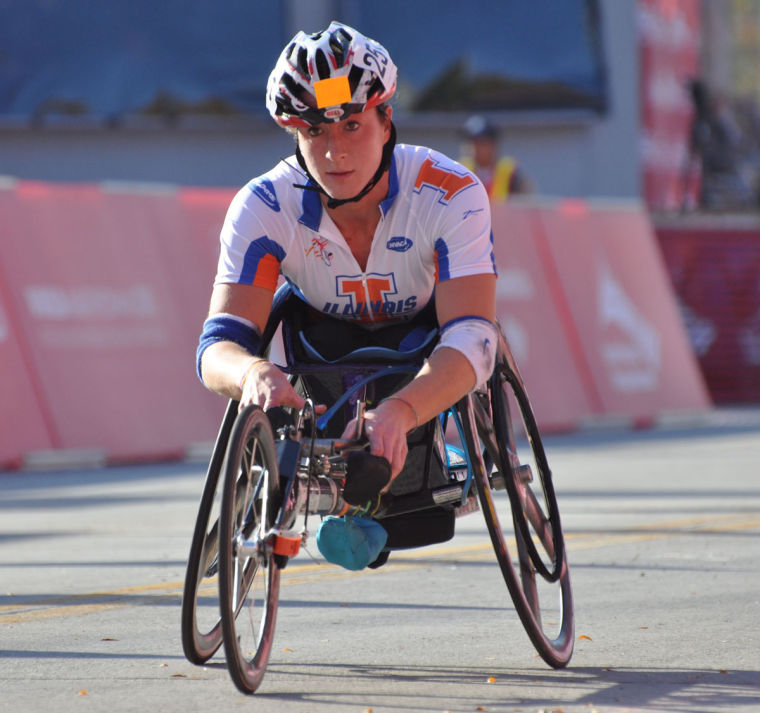 University alumna Tatyana McFadden won the Boston Marathon’s women’s wheelchair division on Monday, her 25th birthday. The win comes eight days after McFadden won the London Marathon. McFadden is halfway to her goal of sweeping the four major marathons — London, Boston, Chicago and New York — for the second year in a row.

McFadden achieved that feat in 2013 and is the only person who has swept all four major marathons in a single year. This year’s Chicago and New York marathons take place in October and November, respectively.

In the interlude, McFadden won a silver medal at the winter Paralympics in skiing. She has won 10 marathons and 11 Paralympic medals, including three gold. She won Monday’s marathon by more than two minutes.

American Meb Keflezighi won the men’s title in the marathon, kissing the ground and weeping after he crossed the finish line to the roar of the joyous crowd.

It’s the first time an American has won the race since 1983, when Greg Meyer captured the laurel wreath. Keflezighi, from San Diego, finished in 2 hours, 08:37 seconds as crowds along Boylston Street chanted “USA! USA!”

He said he had to look over his shoulder today as other runners were closing in, but he held off the competition to bring the win back home to the U.S. one year after the bombings.

“I wanted to win it for Boston … win it for the people,” he said after the finish. “The last three to four miles, (the crowd) pushed me through it. I’m so lucky to be the champion.

“It’s not about me,” he continued. “It’s Boston Strong. Meb Strong.”

The 38-year-old elite runner said he had vowed to win the race after the Red Sox won the World Series last fall and the trophy was brought to the Boylston Street finish line by outfielder Jonny Gomes.

“God bless America,” he said at the finish line. He also wrote the names of last year’s victims on the corners of his race bib.

Kenya’s Rita Jeptoo won the women’s race in record time earlier defending her title from last year. She broke the tape in 2:18:57.

McFadden, Keflezighi and Jepton were among a record number of athletes racing — including wheelchair competitor Ernst Van Dyk who claimed his 10th title — under a crystalline sky and unprecedented security precautions.

Along the course, one million spectators cheered on racers, Boston Athletic Association officials said. The crowds grew so vast near the finish line around 1 p.m. that cops started sealing off some of the blocks on Boylston Street to new spectators.

“We’re back,” Patrick, wearing a Red Sox cap bearing the Boston Strong slogan, told reporters after the race began. “This will be the biggest block party we have and I think a really happy one.”