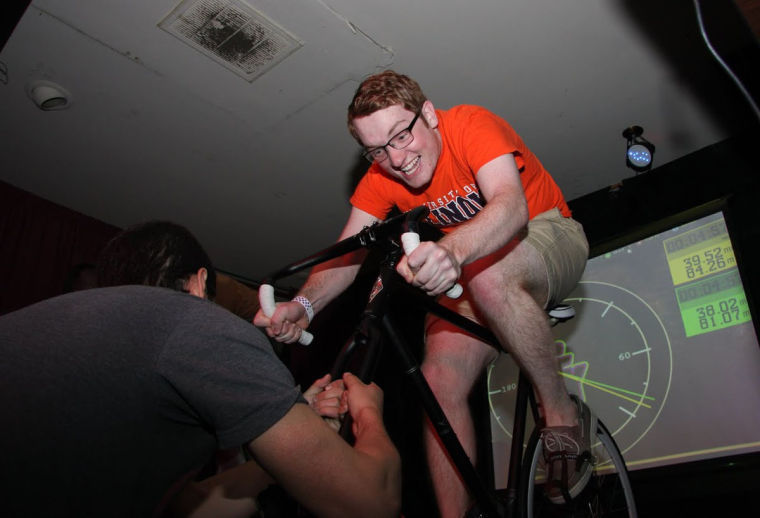 Kenny Shaevel and Michael Bodtke pedal with all their strength on stationary bikes at the Canopy Club on Wednesday night as Illini 4000 members hold on to the bikes’ base to prevent shaking. All proceeds from the event will fund the nonprofit organization’s annual cross-country bike ride to fight cancer.

A bicycle pump sat on the stage of The Void Room, but there were no tires attached to the two bikes. Instead of pedaling to go a distance, riders were pedaling to fundraise.

Illini 4000 hosted Gold Sprints at the Canopy Club on Wednesday night. All money raised funded Illini 4000, a nonprofit organization that goes on an annual cross-country bike ride to fight cancer.

Starting at 6:30 p.m., two people at a time went head-to-head on stationary bikes. Before each race, everyone in the room chanted, “3, 2, 1” over the sound of the music before shouting go.

The racers rode for only about 20 seconds, but their legs were flying as a projector showed the cyclists’ progress. Two lines, one green and one yellow, moved around a circle, showing who was in the lead. Illini 4000 members held onto the base of the bikes to keep them from shaking as riders pedaled as fast as they could. But that wasn’t enough keep the stage from shaking.

Michael Bodtke, junior in Engineering, and Spencer Bryngelson, graduate student in Engineering, are used to racing for speed rather than distance in Illini Cycling, an RSO on campus. They had a friendly competition during their race.

The head-to-head races were followed by a bracket tournament starting at 7:30 p.m. to further raise money. It cost five dollars to join the tournament and two dollars per individual race.

“It’s great when you can have events like Gold Sprints where you can have a ton of fun and fight cancer at the same time,” said Christy Nichols, senior in LAS.

Nichols said she “could not be more excited” to be part of the 2014 Illini 4000 team. She is part of the logistics committee, helping to plan where the riders will stay throughout the country. She contacts community centers, churches or anywhere else that might allow them to stay for free.

“Cancer is a really big part of the lives of almost everyone in the organization, but we still spend a whole lot of time smiling despite that,” said Marissa Castner, junior in Engineering.

During the ride, Illini 4000 also aims to document the American cancer experience. While cycling across the country, riders interview Americans who have dealt with cancer in their lives, whether that is themselves or people they know. These interviews are collected for their Portraits Project, an online website of stories.

Castner finds packing “effectively” the most daunting for the event.

“Preparing for Illini 4000 has gone way beyond training our legs for long days on the bike,” Castner said. “We’ve learned many other tasks, such as how to operate a camera for the Portraits Project, how to change flat tires, fix faulty chains, and how to (hopefully) fit most of your life in a military backpack for three months.”

The ride begins May 24 in New York City and continues through the upper half of the United States. The route concludes in San Francisco on August 3.

Shiqi Fu, junior in Engineering, finds it difficult to raise money from relatives because she is an international student from China. Group fundraising events help Fu raise money, including Gold Sprints.

Money aside, Eric Baehr, senior in LAS and ACES, knows it “will definitely be a physically demanding summer.”

The group rides together every Saturday to train. Riders are also required to do a midweek ride, which is usually about 20 miles.

Nichols said that the group increases the length of their training rides each Saturday. This weekend, the group will ride for 75 miles. Last weekend, the riders took a 60 mile trip to Allerton Park in Monticello and back.

On the way back from Allerton, Nichols said the group “decided that clearly a stop at McDonald’s was absolutely necessary.”

“When you’re cycling, you get incredibly hungry all the time, so most of our rides involve food,” Nichols said. “You wouldn’t believe how much better food tastes after a long ride.”

Nichols said a lot of her favorite memories during rides involved food stops. She also finds the amount of times she and her fellow riders have fallen off their bikes amusing. Nichols said it took a while for them to get used to clipping in and out of their pedals.

“The good news is that we’re getting all of these things out of the way before we bike across the country,” Nichols said.

Baehr said that Illini 4000 has been raising money since last fall to meet their $150,000 annual fundraising goal.

Two groups that Illini 4000 supports are the American Cancer Society and Camp Kesem.

Camp Kesem is a summer program for children who have parents dealing with cancer. According to the Illini 4000 website, Illini 4000 helped Camp Kesem start a summer camp in central Illinois, allowing dozens of children to attend free of charge.

Illini 4000 is continuing to raise money before departing next month.