University’s School of Music is bringing in musicians’ sounds, talents 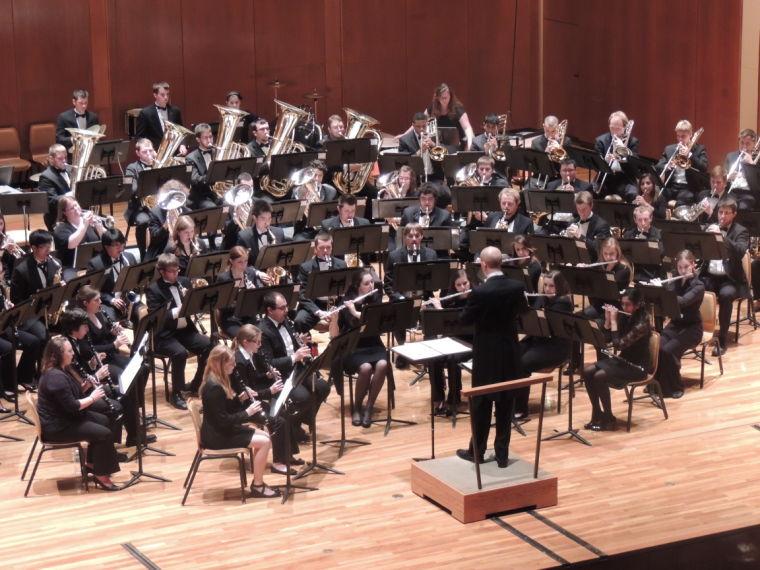 On Tuesday night, the University’s School of Music showcased the Campus Concert Band, University Concert Band and Hindsley Symphonic Band in the Krannert Center for the Performing Arts.

Just like the notes of a perfect chord or scale, it is amazing how a musical performance can come together in perfect harmony.

This harmony transpired on Tuesday night, when three bands in the University’s School of Music played under one roof in the large auditorium of the Krannert Center for the Performing Arts. The bands that performed included the University’s Campus Concert Band, University Concert Band and Hindsley Symphonic Band, led by graduate assistant conductors Brian Coffill, Christopher Gass, J. Ashley Jarrell and Philip Meyer.

The performance is the bands’ only concert for the semester, which they have been preparing for since January. The bands are in fact a mix of music majors, non-music majors and community residents who only meet once a week for a duration of about two hours.

However, one would think they have been practicing together every day for hours on end after attending the bands’ musical Tuesday night performance.

Throughout each ensemble’s performance, it was clear that many students were a part of multiple concert bands. According to musician Janet Slater, some students were playing secondary instruments, which is a skill music majors in the School of Music need to harness before teaching music in school bands.

It was also clear that there were older, non-student musicians playing on stage as part of the ensemble. There were actually members of the community of Champaign-Urbana in the ensemble, as Slater pointed out.

Slater is one of the community members who played in one of the ensembles, and she was thrilled that this option was available after many years of not having the band open to the community.

“I learned about it through the U of I summer band,” Slater said. “It is a nice way to just make music together.”

The music selections from all the bands were diverse and colorful, with popular themes ranging from the Wizard of Oz to the recognizable sound of John Philip Sousa with the Golden Jubilee March.

The piece that stood out the most was in the second act and titled “I Am.” Conducted by Brad Wallace, graduate assistant, the piece incorporated interesting elements, such as the ensemble singing the words “I am.”

Another piece that stood out was a score of “The Phantom of the Opera” by Andrew Lloyd Webber and Joel Schumacher. Conducted by Gass, the arrangement depicted the award-winning Broadway show perfectly, showcasing all its popular songs.

“I miss playing in an ensemble, and this is a way to help fill that void a little bit,” Slater said.

However, there were definitely no voids left on stage, as every piece in the concert was full and rich with sound and was very entertaining.

Tuesday’s concert proved that the University’s attempt to offer its bands to the public was successful. From the variety of students, instruments and backgrounds that took the stage that evening, it proved that even the most versatile group of musicians can come together to make music and have it resonate in perfect harmony.

Amelia is a sophomore in Media. She can be reached at [email protected]