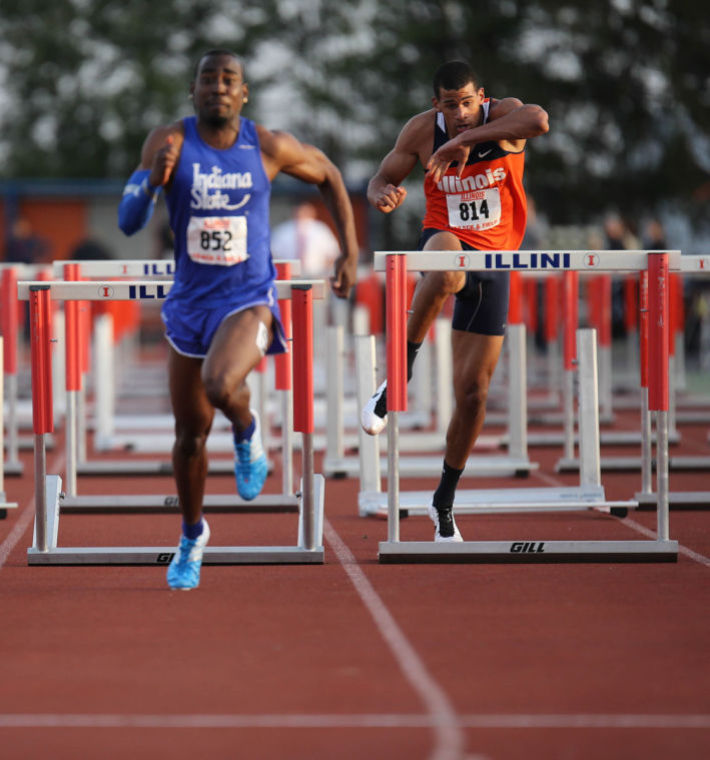 Illinois’ Cam Viney goes over the final hurdle of the 110 meter hurdle event during the Illinois Twilight Track and Field meet at Illinois Soccer and Track Stadium, on April 12.

The Illini men’s track and field team watched some of the best athletes in the world compete at the 105th Drake Relays this weekend. Besides collegiate competitors, the Drake Relays featured Olympians and world championship-caliber athletes. But the world’s best couldn’t steal the show from the Illini, who put on one of their best performances of the year and claimed a share of the Hy-Vee Cup.

“We watched them all, we studied them like we had a test on them the next day,” said sprinter Stephon Pamilton, who ran on the third place 4×100 meter relay and on the second place 4×400 meter relay. “It was great to run into the people that you one day want to be.”

The Illini shared the track not only with world-class athletes, but also some of the top teams in the NCAA. The weekend provided the Illini the opportunity to jump into that conversation as one of those top NCAA teams.

“It’s an opportunity to go out there and show we’re not just a little team in the Midwest or up in the North that’s got a couple of sprinters or a couple of distance guys,” head coach Mike Turk said. “We’ve got a pretty good, deep squad, and we’re not going to back down from anybody.”

This marked the second year for the Hy-Vee Cup at the Drake Relays, a trophy based on five relay events: the 4×100, 4×400, 4×800, sprint medley and distance medley relays. The Illini shared the title with Arkansas after winning it outright last year. Turk said the meet director had told him he was bringing in more competition to make the cup more highly contested.

The 4×100 team of Julian Smith, Brandon Stryganek, Pamilton and DJ Zahn took third place. Arkansas edged them out by just thousandths of a second to take second place. The 4×400 featured a relay squad of Zahn, Joe McAsey, Kenneth Allen and Pamilton and fell to Arkansas by less than a second.

The sprint medley team took second to Georgia by 0.16 seconds, the distance medley team was third behind UTEP and Washington, while the 4×800 meter relay came in third to Washington and Arkansas.

Turk said the Illini had several close finishes that could have given the team a chance to beat the Razorbacks outright, but the Illini’s performance against Arkansas — one of the top programs in collegiate track — shows how far the program has come.

Pamilton said he considered the Illini right up with all of the other strong teams that competed at the meet.

The Illini also had some stand-out performances in individual events that were not part of Hy-Vee Cup scoring.

Vanier Joseph faced off against Indiana State’s Greggmar Swift again and defeated him in the 110-meter hurdles. Joseph’s win was a defense of his title at last year’s Drake Relays.

Fellow hurdler Cam Viney took third in the 400-meter hurdles, behind only No. 1 Michael Stigler of Kansas and No. 3 Miles Ukaoma of Nebraska. The race continues the sophomore’s impressive outdoor season.

The success the team had with the unique format of the Hy-Vee Cup gives the Illini a chance to showcase their depth, according to Turk.

“It’s not just about having some good sprinters, you have to have a good deep pool of talent in your sprints squad and in your middle distance and distance squads,” Turk said. “We were able to put those lineups together and represent across the board.”