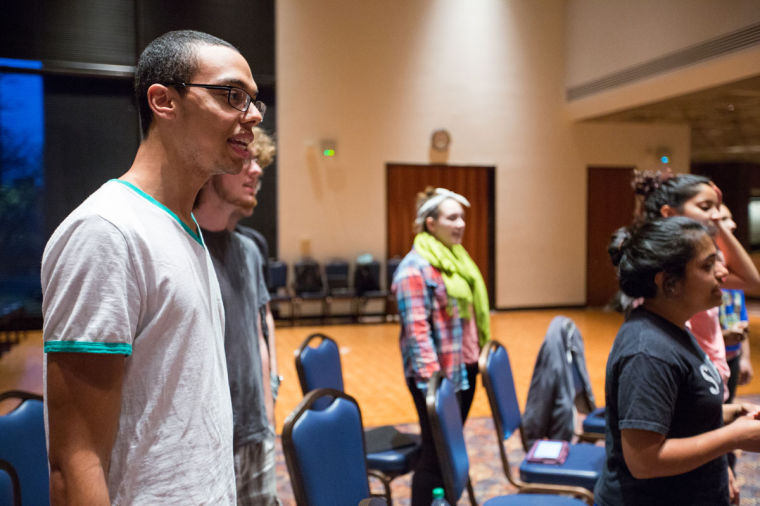 Members of Illini Student Musicals rehearse together on March 21. “In Progress: A Broadway Revue” will debut Thursday at 7:30 pm in Lincoln Hall Theatre.

As graduation quickly approaches, students about to exit the doors of higher education may deal with the anxiety of life after college. This apprehension is embodied in the singing, dancing and acting of Illini Student Musicals’ upcoming show, “In Progress: A Broadway Revue.”

The performance is a concert revue with an original, student-written script. “In Progress: A Broadway Revue” will take place in Lincoln Hall Theatre at 7:30 p.m. Thursday and Friday. Tickets are $8 for University students and $10 for general admission. Tickets can be purchased through Illini Student Musicals’ official website.

The script for the concert revue was co-authored by Zach Moyer, director and senior in FAA, and Kelsey McGrath, dramaturg, properties coordinator and senior in Media and FAA. The vocal arrangements and orchestrations for the performance were written by Andrei Strizek, music supervisor and graduate student in FAA.

The concert has a 15-member cast and focuses on the stories of four seniors about to graduate from college, according to Michael Courtney, producer for the show and senior in ACES.

Courtney said this was the first time Illini Student Musicals has done an original show. When the executive producers and Courtney decided they wanted to do the concert revue, Courtney said they hired Moyer to create the script and direct the show. Moyer later brought McGrath onto the project.

Moyer said McGrath and he pulled experiences from their own lives to incorporate into the script. The co-authors included topics such as stress and the uncertainty that some students face about life after graduation.

“We really think that this show is not only the brainchild of our experience, but of the collective experience of what it’s like to be a second-semester senior on the cusp of graduation about to experience that next phase, that uncertainty,” Moyer said.

“In Progress: A Broadway Revue” features students’ struggles as graduation looms closer. Moyer said that throughout the show, the characters go through situations like plagiarizing, dealing with sexuality and waiting to hear from a potential employer and graduate school.

According to Moyer, “In Progress: A Broadway Revue” is a concert-format performance with a story and big musical performances from Broadway productions.

“So we have a very small cast of really dynamic, talented singers, actors and dancers who have taken on this incredible challenge,” he said. “They’ve learned some of the most difficult, contemporary Broadway songs in existence.”

The concert revue incorporates 12 popular 21st-century songs from Broadway productions, including “I Wish I Could Go Back to College” from Avenue Q, “For Good” from Wicked and “So Much Better” from Legally Blonde.

McGrath came up with the concert’s title, “In Progress,” after a discussion about the difficulties of being comfortable in the world after graduation.

“Even if you’re a professional, even if you’re an adult, it’s a constant growing process,” she said. “We’re always kind of in the making, and we’re allowing the people around us and the experiences that we seek out … to shape us.”

Sara Costello, junior in FAA, plays an array of characters in the production. One character she plays, named Sara Virginia, is a reporter covering the disheartening job market for college graduates.

Costello said she feels lucky that Illini Student Musicals can put on this original production after establishing itself about two years ago.