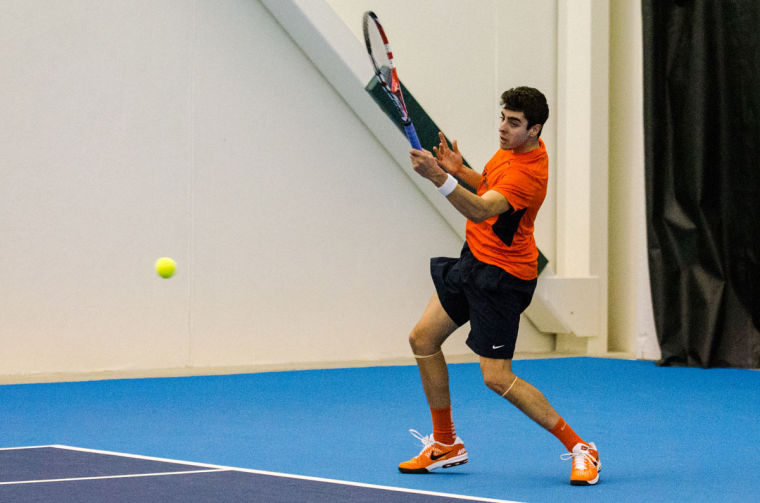 The Illinois men’s tennis team’s road to a national championship is officially underway. An NCAA tournament appearance has become expected for the Illinois program, as this year’s appearance will be their 19th straight. For head coach Brad Dancer, specifically, this will be his ninth straight appearance while at the helm.

The Illini were ranked as the No. 12 overall seed in the tournament, which allows them to host the first and second rounds of the tournament. This should prove to be a big advantage for the Illini considering they haven’t lost at home this season.

“We’re excited about playing at home just because we love our facility and I think our guys usually play well here,” Dancer said.

Illinois’ first match will pit them against Ball State (14-10), a team the Illini were able to beat handily earlier in the season, 4-0. The winner of that match will take on the winner Memphis (14-5) vs. Drake (22-5). Ball State and Memphis were both automatic qualifiers, winning their conference’s championships. Regional action will begin for the Illini on May 9 and will be completed by May 11.

If the Illini can advance past their own region, they will move on to play in Athens, Ga.

“We’re going to be doing some heat training, so training with a lot of warm clothes on because Georgia is going to be pretty hot,” junior Farris Gosea said.

Although Illinois will be favored to advance from their regional and likely have a chance at revenge against No. 5 seed Baylor in the round of 16, no opponent can be taken lightly.

“We’ve got good teams all the way in front of us, so we know we’ve got some big challenges,” Dancer said.