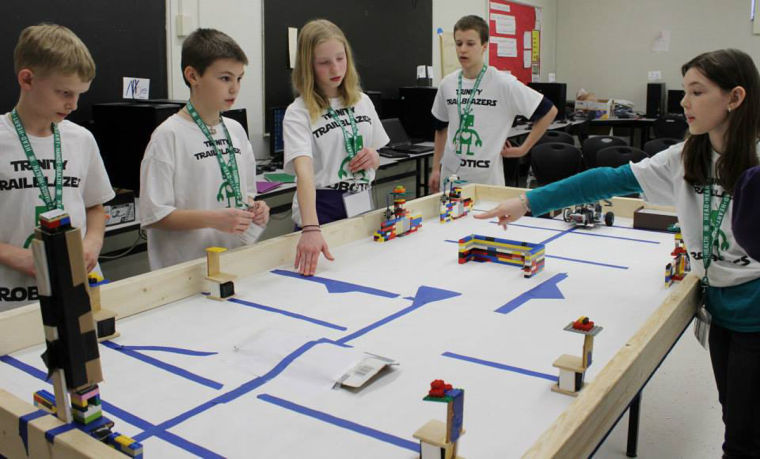 Robots will take over the ARC this Saturday during the sixth annual Illinois State 4-H BoxBot Robotics Competition. Approximately 300 students within 45 teams from across the state will exhibit their robots and compete against each other.

In addition to the student competitors, University students from the colleges of Engineering and ACES will man booths and present their own projects in the STEM field, according to Smith. The Champaign-Urbana Community Fab Lab, which focuses on innovation, fabrication and design, will also be there with a 3-D printer.

The students’ robot creations, which are made predominantly out of LEGO Mindstorms sets, will have three minutes to transport packages across a 4-by-8 field, gaining extra points for returning the packages and physically lifting them up.

“The robotics competition is for groups who are just starting out with playing with robots to do well, and then once they’ve been doing it for four or five years to be able to challenge them,” said Bob Smith, 4-H statewide robotics educator. “So the whole idea is just to … see what they’ve actually learned and what their skills are with robotics.”

Although the competition itself is for 9-to-14-year-old youths, University students and community members are encouraged to attend to watch the judging and enjoy the atmosphere, Smith said.

4-H robotics is part of the 4-H umbrella organization, which includes 7 million members nationwide in addition to other organizations in 60 other nations, according to Judy Bingman, media and communications specialist for the 4-H state office.

“In Illinois, we strive to impact the lives of 200,000 youth a year,” Bingman said. “4-H-ers are 8 to 18 years of age. There is a 4-H organization in every county in Illinois and serves rural, small town, metro and urban areas of the state.”

The 4-H robotics league itself is gaining traction. Though the 4-H program has been going on for over 100 years in the United States, 4-H robotics is a relatively new addition. The program is only in its sixth year.

“I started (working with) that first competition, and in that time, we have seen robotics interest and participation in 4-H grow like wildfire,” said Lisa Bouillion Diaz, extension specialist in technology and youth development for 4-H and adjunct professor of Education.

The students certainly do not need to be experts in robotics to participate, as long as they have the passion to build and create the models and work in teams.

“We try to make it as student- and youth-led as possible,” said Donna Nuger, 4-H metro youth development educator focused in DuPage, Kane and Kendall counties. “I think that there is so much to be learned by having the youth meet with other youth from around the state who have the same interest.”

Each team has at least one volunteer parent or teacher, but this Saturday it is all about the kids, according to Diaz.

“Anyone who comes to the May 3rd event will see our examples of youth teaching youth,” Diaz said. “That is, for me, a really important descriptor of how 4-H approaches robotics education.”

The program continues to grow, Smith said. He works with students around the state to support the teams and help with training and organize robotics events, such as the one at the ARC this Saturday.

“This year through a grant, we’ve started 50 (more) clubs in the Chicago area,” Smith said. “20 of those clubs are coming down here to compete.”

The entire event lasts from 11 a.m. to 5 p.m., including a robotics fair, judging session, demonstrations and awards. Food will also be available on site, and the public is encouraged to attend.