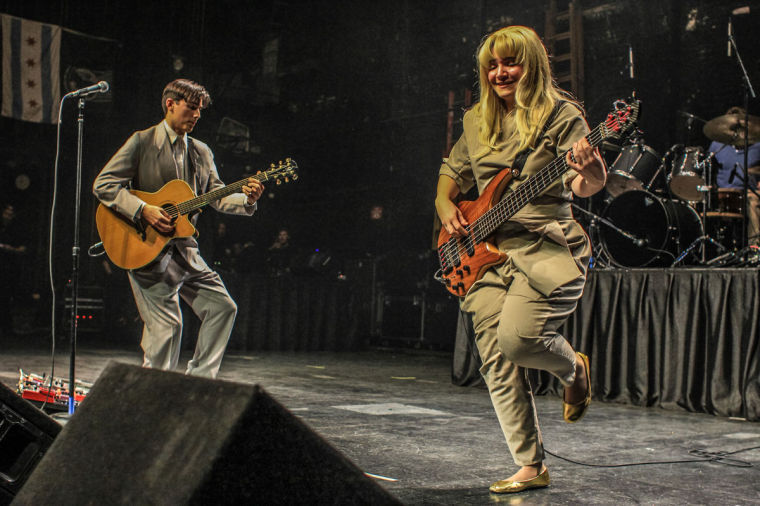 PThis Must Be the Band performs the Talking Heads’ album “Stop Making Sense” at the Vic Theatre on Nov. 9. The band will visit Canopy Club on Friday night to play a show with DJnoDJ.

On Friday night, Canopy Club will host This Must Be The Band, a Talking Heads cover band from Chicago.

This Must Be The Band, headed by lead guitar and vocalist Charlie Otto, was formed back in 2007 through a series of Craigslist inquiries for band mates and, perhaps, some forces of fate.

Friday night’s show will feature band members Charlie Otto, Jamie Jay on bass and vocals, Alan Maniacek on drums, Kiley Moore on backing vocals, Vincent Naples on synths and guitar, and Nate Urbansky on percussion. Since its formation, the band has grown from frequenting “the coveted pizza joint circuit” to traveling across the country and playing at larger-sized venues.

Last week, Otto reported that the band would be returning from a gig in St. Louis on Sunday to head over to Carbondale, Ill.

Bassist Jamie Jay said the band does attract a large number of older concert goers — mostly those who remember Talking Heads from their own college days. However, an adequate amount of 20-something-year-olds has also begun to attend their shows.

“In middle school, I started listening to really bad stuff, ‘cause my friends liked it,” she said. “Like Green Day, My Chemical Romance … My parents — who like good music and were, like, around for Punk Rock and New Wave — they were just like, this is crap. We have to do something. So my dad got me the Talking Heads’ (self-titled album).”

Schenker was conflicted in choosing her favorite Talking Heads album, but eventually named “The Name of this Band is Talking Heads” as her favorite, and if not that, then “Stop Making Sense.”

“I like their live stuff the best,” she said.

“We just base the set on what the crowd is requesting,” Jay said. “We’ve been doing it for so many years that we have a huge plate of options, so whatever the crowd is calling out … we try to play as many requests as we can, and keep the energy going.”

This Must Be The Band shapes the sound and tone quality of their instruments to mimic that of the 1980s New Wave band, but what really stands out in their live shows is the voice of Charlie Otto and its uncanny resemblance to Talking Heads singer David Bryne. Indeed, the band’s website boasts that Otto has been coined “the illegitimate son of David Bryne.”

After This Must Be The Band performs, there will be a second set by DJnoDJ, a side project headed by Otto and of which Jay and other members of This Must Be the Band are members. DJnoDJ can be described as live house music and features drums, electric drums, bass, guitar, keyboard and vocals.

“Almost aevery instrument has samples they can play and electronic sounds,” Jay said. “For instance, Charlie can make his guitar sound like a keyboard, and the vocals all have vocal processors and vocoders, which can make the vocals sound affected or like a robot. All kinds of crazy stuff.”

This Must Be the Band and DJnoDJ will play at Canopy Club for an 18-and-older show. Doors open at 8 p.m., and the show will begin at 9:30 p.m.. Tickets may be purchased beforehand either at The Canopy Club and Manolos or at the door for $10.

Carly can be reached at [email protected]