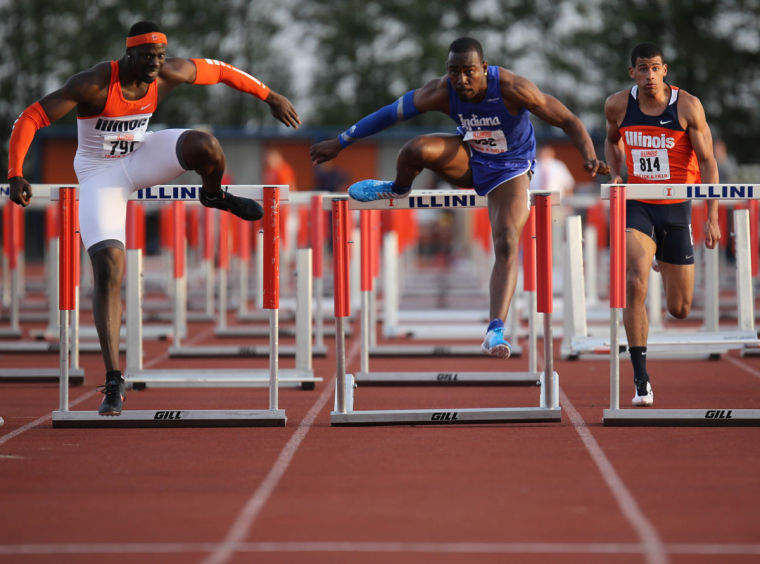 Illinois sprinter Vanier Joseph only competed in one event over the weekend after a standout performance at the Drake Relays last weekend. The Musco Twilight was Illinois’ final regular season meet.

The Illinois men’s track and field team took third at Iowa’s Musco Twilight Meet this weekend in its final competition before the Big Ten championships.

The meet also gave the No. 14 Illini a final preview of some teams they’ll see at the conference meet. They went up against fellow Big Ten front-runner No. 11 Nebraska, Iowa and Minnesota. Several Illini had strong performances, including three event titles, but the team knows it still has room for improvement before the championship season begins.

“We were a little flat. … I wouldn’t say that it was for a lack of effort as much as we just had some guys that were probably a little tired still from running so many races last week at Drake,” head coach Mike Turk said.  “But I thought overall we had some really, really good performances.”

One of those performances belonged to Joe McAsey, who won the 800 meters in 1 minute, 50.00 seconds.

After being sidelined all of cross-country season due to injury, McAsey has been enjoying a breakout season. He took second in the 600-meter run at the Big Ten Indoor Championships and has been a key member of the No. 6-ranked 4×400 meter relay team. He said it was beneficial to run against the athletes he will compete against in two weeks.

Despite his strong performance, McAsey said he would have liked to run a little faster and be under 1:50. Turk said that’s something he’s not too worried about.

“I think we get caught up in looking at just ‘what are the times,’” Turk said. “Joey hasn’t run any really fast 800s yet this year, but Joey has been winning a lot of races. I think you have to take your pick between winning races and just running fast times, I’ll go with the guy winning races, and I know that he’ll be ready to run fast times in the 800 when it comes to Big Tens.”

Turk said another stand-out performance came from freshman hurdler David Kendziera. Kendziera ran both hurdle events on Saturday, taking fourth with personal-best times in both the 110-meter and the 400-meter hurdles. Turk said that Kendziera has a chance to score some points at Big Tens and advance to the NCAA Preliminaries in the 400 hurdles.

For field events, Cody Klein put in another performance as Illinois’ top pole vaulter and finished fifth. The senior said he was hoping for more from his performance.

“The way I’m looking at it, Big Tens is in two weeks. I’d much rather do well there than here, and I got to see a bunch of the Big Ten competition,” Klein said. “It was a great learning experience, and there’s a lot of stuff that I need to focus on.”

Throwers Davis Fraker and Aaron Wilks both placed third — in the hammer throw and the javelin, respectively — to add points for the Illini in the field events.

Turk said the team avoided a letdown after the Drake Relays and performed well even as several athletes had a much lighter load of races. Vanier Joseph only competed in the 4×100 meter relay, and DJ Zahn only ran the 100-meter dash.

“I knew that we just weren’t going to load up to try to put our people in a place to win that meet,” Turk said. “I was a little worried about us falling off a little bit and kind of losing some momentum going into Big Tens, but I don’t think we did that … I think they handled it just fine and we’ll be ready to go.”