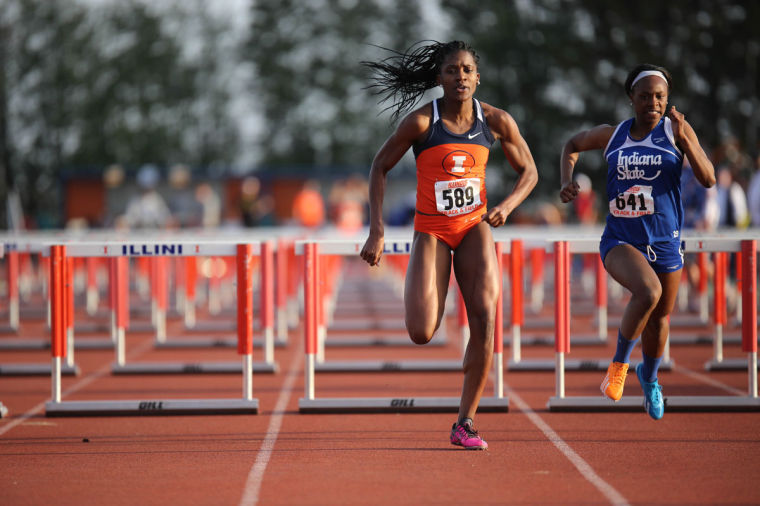 Illinois’ Jesica Ejesieme takes her last few strides before finishing the 100 meter hurdle event during the Illinois Twilight Track and Field meet at Illinois Soccer and Track Stadium on April 12.

The Illinois women’s track and field team finished with three event titles at the Billy Hayes Invitational over the weekend.

The meet held in Bloomington, Indiana, was the final of the regular season for the Illini.

“We’ve had a lot of ups and downs to our season, but it’s important to go into Big Tens on a positive note,” head coach Ron Garner said. “Everything our girls have been through have led them to this point.”

One athlete who has been a constant bright spot for the Orange and Blue this season has been sprinter Jesica Ejesieme.

Ejesieme added another strong performance this weekend to what has already been a successful outdoor campaign. Ejesieme won the 100-meter hurdles and finished second in the 400 hurdles. She now ranks third in the Big Ten in both events.

A senior, Ejesieme knows her career is coming to a close but is confident everything will work out for the best.

“I’m just trying to enjoy the time with my teammates that I do have left,” Ejesieme said. “I don’t feel any added pressure. God has a plan for me and whether it’s Big Ten champion or NCAA qualifier, I am just happy for the opportunity. What’s meant to happen will happen.”

Along with Ejesieme, redshirt sophomore Alyssa Schneider has been a consistent point-scorer for the Illini throughout both the indoor and outdoor seasons.

This weekend was no different. Schneider finished second in the 1,500 meter run with a time of 4 minutes, 22.53 seconds, her best performance of the outdoor season. She is now ranked sixth in the Big Ten.

Schneider, who also ranks in the top-10 in the conference in the 5,000 meter run, has been competing since early fall with the cross-country team and believes the right combination of rest and intense training has helped her sustain her success.

“It’s important to adjust your training to where you are in the season,” Schneider said. “I have been able to stay injury-free and right now taking care of your body and being able to balance everything is most important.”

Senior Ahlivia Spencer won the 800-meter run with a time 2:08.58. Spencer’s performance ranks fifth-best in conference, and her strong time has positioned her well to repeat as conference champion.

The final event title on the day belonged to thrower Jazjuan Wallace-Sipp. Wallace-Sipp followed up her record-setting performance at Drake last weekend with another victory in the discus with a throw of 163 feet. Wallace-Sipp is ranked first in the conference.

Freshman Kandie Bloch-Jones, the defending indoor Big Ten champion in the high jump, will go into outdoor championships with the top height in conference.

Another bright spot for the Illini was the 4×100 relay team. The squad consisting of Kawanna Brooks, Kymbriona Taylor, Claire Kieger and Ejesieme finished second with a time of 45.80 seconds, the seventh-fastest in the Big Ten this year.

With Big Ten championships on May 16 in West Lafayette, Indiana, the Illini are confident their training will see them through.

“We’re just having fun and giving it our all,” Ejesieme said. “Hard work never goes unanswered, so we’ll see.”

Mubarak can be reached at [email protected]