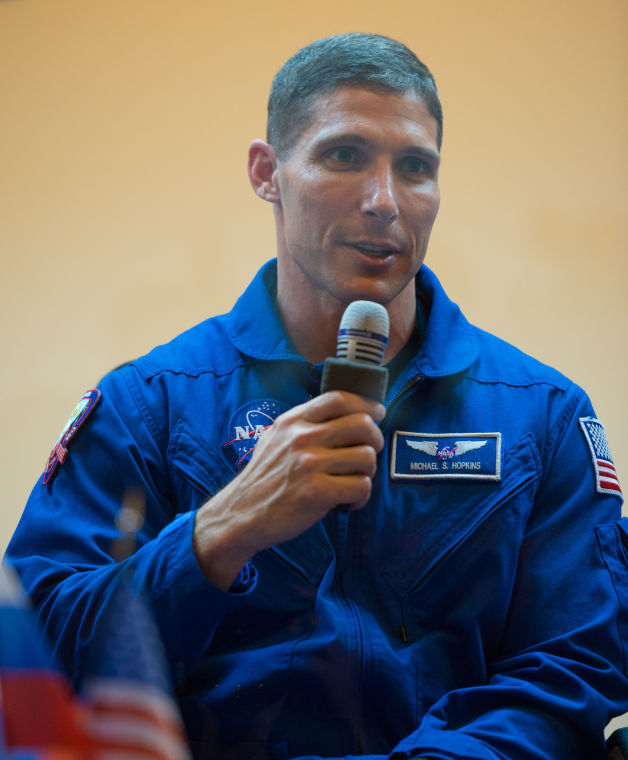 Colonel Mike Hopkins will speak at the University Commencement May 17 at Memorial Stadium.

On Sept. 25, 2013, Colonel Mike Hopkins was strapped in the Soyuz TMA-10M spacecraft ready for takeoff on his first mission to space.

If this sounds like the beginning to a science fiction novel, that’s because even for Hopkins, preparing to blast through Earth’s atmosphere seemed like a surreal experience.

“You sometimes wondered if it was real—if it was really going to happen,” he said. “When you finally get to that moment when the engine actually lights and the rocket lifts up off the ground, that’s when you think, ‘I’m in good shape here. I’m actually going for real.’”

Hopkins, a 1991 University alumnus, was announced in April as this year’s commencement speaker.  The colonel in the U.S. Air Force and current NASA astronaut will address University graduates on May 17 at Memorial Stadium.  Additionally, he will make his first post-mission presentation since returning from the International Space Station on Friday, May 16, and attend the ROTC tri-color commission ceremony as a special guest on Monday, May 19, according to Laura Wilhelm-Barr, director of special events for the office of the chancellor.

As an undergraduate in aerospace engineering at the University, Hopkins said he was heavily involved in a variety of demanding campus activities.

He was an active member of his fraternity, Pi Kappa Alpha, Air Force ROTC and a defensive back for the football team, besides excelling in an academically rigorous major.

He said that all of these organizations were accommodating, for example, when he might need to travel on the weekends for football.

Otherwise, he scheduled his classes in the morning, went to football practice in the afternoon and had time for his ROTC and fraternity activities in the evening.  He even had time to meet his wife through one of his fraternity brothers.

“My biggest recollection of Mike is that besides being very personable and intelligent, he was very focused on what he wanted to do and that’s what got him to where he is today,” said John Prussing, professor emeritus in aerospace engineering and Hopkins’ instructor and academic advisor during his undergraduate career.

Prussing expressed the magnitude of Hopkins’ achievement as a current astronaut for NASA, explaining that aspiring to this position is “like wanting to be in the NBA — there’s a lot of players but not very many people make it there.”

In fact, out of 3,500 applicants, only 14 were selected for the 2009 candidate class.  Hopkins applied to the program for nearly twelve years before he received the call notifying him that he had been chosen.  He earned a masters degree in aerospace engineering at Stanford University and was working as a special assistant to the vice chairman of the Joint Chiefs of Staff in the Pentagon at the time.

“Boy, I mean just everything kind of flashes before you — all the times and the tries,” he said about the experience.  “It’s quite a feeling.”

Even though he has quite literally reached the stars, Hopkins has remained grounded in the conviction that all of his success traces back to the University. He even wore his Illinois football jersey under his NASA uniform during an Oct. 18 interview from space with the Big Ten Network, a sign that his upcoming commencement speech will be yet another way Hopkins affirms his pride in the Orange and Blue.

“Everything about getting to be an astronaut I can tie back to Illinois,” he said.

Maggie can be reached at [email protected]