Google Glass improving but still not ready for public release 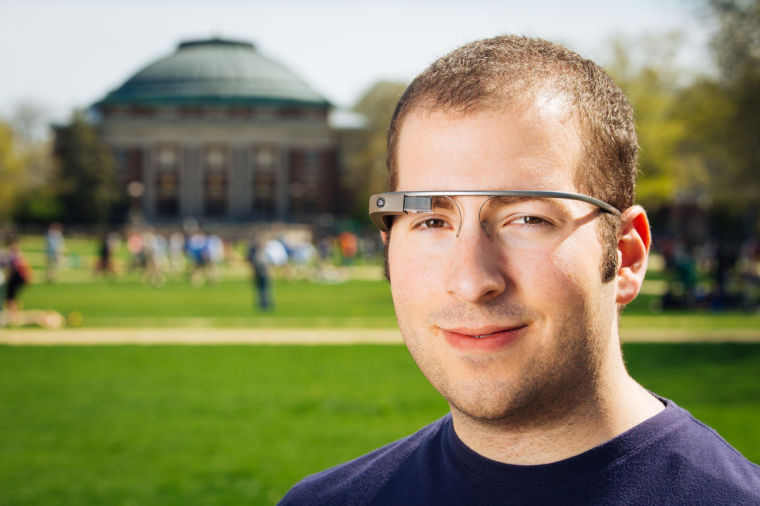 He just might have the coolest pair of glasses on campus.

Josh Doil, senior in LAS, has fitted his prescription lenses to Google Glass, a hands-free technology device that allows many of the same functions as a smartphone, including a camera, to be displayed in a tiny glass prism above the right eye.

Though it has not yet been released to the general public, Google has given its new product to a limited number of individuals and businesses. Doil received Google Glass last November after developing a product that he was contracted for and the contractors covered the retail price of $1,500.

Guillermo Monroy, doctorate student in Bioengineering, also had the cost of his Google Glass covered by his lab at the Beckman Institute, where he conducts research primarily in optics.

He first was given the device through Google’s Glass Explorer Program, which gives applicants who demonstrate a significant use for the technology access to the product. After he flew to San Francisco to pick it up, Monroy went to work on developing the apps necessary to integrate it into his research in Optical Coherence Tomography. This technology produces images of the eye interferometrically, which means that it compares light from a sample to light from a reference beam to produce an image much like that of an ultrasound, Monroy said. The Glass allows the streamlining of the images from the probe to the “screen” directly in front of the researchers’ eyes, rather than having to look at a monitor and away from the patient or sample.

Because Google Glass is still in its developing stages, Doil and Monroy both said they have to code and program their own apps to tailor it to their own uses. While Monroy uses his primarily for his research, Doil said he has opted to use the device as he would any other pair of glasses.

For Doil, however, Google Glass has proved useful when biking because it can monitor and display speed, distance and cadence ratios. He also used it during the Illinois Marathon relay to text his relay team with his location while running.

“I’m really into the developer experience,” he said. “But it’s not something you can easily integrate into your life unless you know exactly what you need or you’re willing to write code or go through other people to write it for you.”

Nancy Benson, professor in journalism, said that she used two Glass devices in her Advanced Multimedia Reporting journalism course this semester. Like Monroy, she got them through the Glass Explorer Program. While Doil and Monroy indicated concerns with the camera for privacy reasons, Benson said that the audio, video and camera features made Glass a useful journalism tool for her students.

She said some of her students found the device useful for covering news that required them to have the freedom and flexibility to move through a large crowd without the bulkiness of a standard TV video camera. It was less effective for audio in a loud room, where too much sound compromised the quality of the recordings.

The shortness of the battery life, as well as the heat the battery generated, are two major factors that make the product less than ideal for most types of journalism, Benson said.

“Working with new technology is always fun and interesting, but I think (my students) agreed and I agree with them that there is very limited use right now,” she said. “It would need to have a lot more features, at least as a journalistic tool.”

Another problem is that Google Glass is so new that laws and policies have yet to be created to address security and safety concerns, many of which reflect the lack of familiarity with the product in the general public.

“I’ve been careful not to use it when driving,” Monroy said. “Some people have gotten tickets because it’s technically a display, but it’s not always active.”

Doil also said people will approach him and ask if he is recording them, but they do not realize that it would be obvious if he was recording them because of how the glass makes a loud noise or shutter sound when it starts to record or take pictures. He said that just as a precaution, he also removes it during exams to avoid professors thinking that he could be cheating.

In addition to the Glass Explorer Program, Google also launched an #IfIHadGlass competition last spring, which called for 10-to-15-second video submissions that demonstrated how they could potentially use the technology.

Matthew Dierker, junior in Engineering, won a device through the competition. He said one of the interesting experiences he has had with the device was seeing his grandparents try it on. For people from a generation that has seen technological progress explode since before the Internet, trying on this futuristic piece of technology was enjoyable, he said.

Cole Gleason, junior in Engineering, also won a Glass last July through the same competition. His was part of work he was doing on accessibility software for people with auditory disabilities, which could put subtitles in the Glass.

“We’ve had some big jumps since smartphones,” Gleason said. “But we are still a long ways from seamlessly interacting through phone, which is what Google Glass attempts to do. But at this point, it’s not the best interface we can come up with.”

To help improve the product, Glass Explorers and users are given forums for feedback and support. Google offers “Office Hours” for its explorers, Monroy said, which allows them to contact Google with any problems or concerns they encounter.

Benson said that as part of the Explorer Program, she will compile the feedback in her students’ journals from this semester and give it to Google.

Overall, the consensus from Gleason, Dierker, Doil, Monroy and Benson seems to be that the product is an exciting step toward streamlining the functions of a smartphone into a handsfree device. However, it still has a long way to go before it is cost-effective enough for the general public and can provide enough everyday applications to replace smartphones.

“My smartphone does a lot more things than Google Glass, and I can use it in many of the same ways, so I don’t know why I would choose a $1,500 piece of equipment instead,” Benson said.

Whether Google Glass will be released this summer, the technology and its programs will continue to improve through Google Glass Explorers and users.

Maggie can be reached at [email protected]