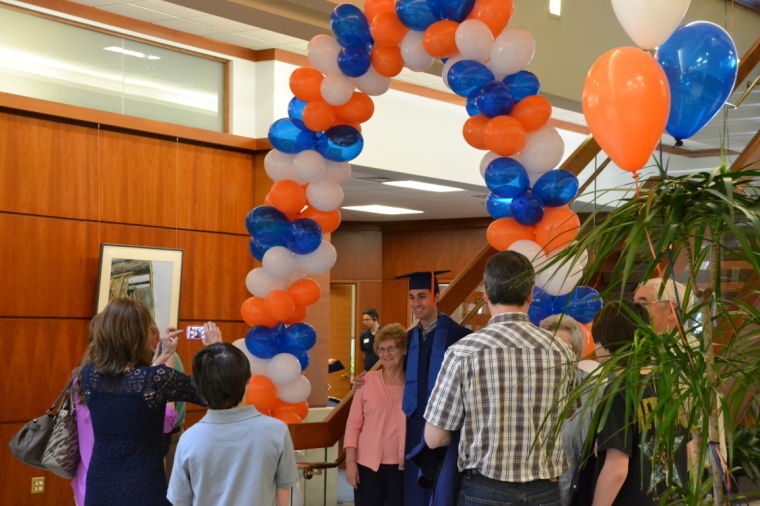 A 2013 graduate poses for a photo at last year’s GradFest.

When commencement comes to a close on May 17, graduation caps will be tossed and diplomas will be handed out, and seniors will officially become alumni.

The Student Alumni Ambassadors and the University Alumni Association recognize and celebrate the achievement of graduation annually with their co-hosted event, GradFest. Graduates, families, alumni and fellow University students are all welcome to attend the festival.

GradFest will be held in the Alice Campbell Alumni Center from 2 to 5 p.m. following the commencement ceremony. A DJ will provide music that is similar to the music played at campus bars, according to Vanessa Grisko, co-director of GradFest and sophomore in LAS. Grisko said food from vendors such as Hickory River Smokehouse and J. Gumbo’s in Urbana will be served as well.

Maverick Woodside, vice president of student engagement for SAA and junior in ACES, said he believes that GradFest can provide new opportunities for recently graduated seniors.

“It’s an opportunity for SAA to close the door on students’ time as students and open the door for them as alumni,” he said.

Members of the Chicago Illini Club will also be present at the event to provide advice for the graduates, according to Woodside.

According to Jessica Filangeri, a GradFest co-director and sophomore in Engineering, representatives from Liberty Mutual Insurance and realtors will be at the Fest to assist graduates in their futures by providing insurance quotes and information.

Filangeri also said that giveaways, such as a Homecoming package, which includes tickets to the 2014 Homecoming football game, will be given out.

Filangeri said she believes seniors should feel motivated to attend.

“It’s a free event with a DJ and free food, and it’s to celebrate the seniors and what they’ve done. Why shouldn’t they come?” she said.

Like Filangeri, Woodside said he believes that it will be beneficial for seniors to attend.

“It’s an opportunity for them to start getting involved as alumni and celebrate with family and friends,” Woodside said.

Grisko said she believes that seniors attending will make their experiences at the University come full circle.

New freshmen arrive on campus in August and attend the SAA’s Sights and Sounds program on the field of Memorial Stadium. With GradFest, seniors will have started their college careers with SAA and will have ended with the organization as well.