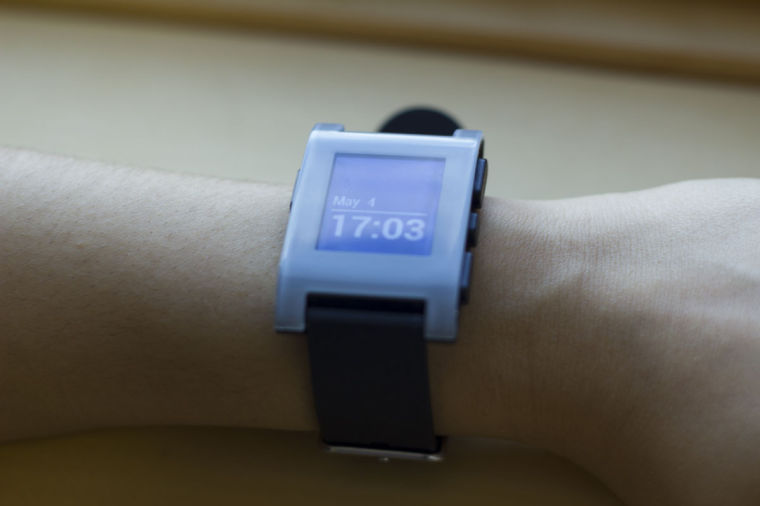 Pebble Smart Watch can connect to any device that supports iOS or Android systems via Bluetooth to notify its user of any incoming calls, messages, e-mails and more. Some University students — participants in engineering courses, a campus workshop and a Twitter campaign — have received free watches.

Many engineering students have been spotted wearing the same watch on campus, and it’s not an accident.

Pebble Smart Watch has a black-and-white e-paper display. It can connect to any device that supports iOS or Android systems via Bluetooth. The main purpose of the Pebble is for owners to get notified about any incoming calls, messages, emails and more, without having to look at a phone. However, that is not the only thing this smart watch can do.

The Pebble can be customized and modified by installing desired applications. Aside from the default applications, there are a wide variety of apps to choose from. Some popular apps include Google navigation, remote control for music, Evernote and an alarm clock.

The University is a part of science, technology, engineering and mathematics, an educational project that encourages students to integrate skills. Pebble donated 2,000 free watches to the University’s computer science department and Cinda Heeren, computer science instructor, was placed in charge of deciding how they would be distributed. She decided to give watches to all students in CS 225 Data Structure, CS 398 Special Topics: Computer Architecture and Visualizing Literature, and CS 241 System Programming classes. She was also the one that organized the workshops.

Most students either received their Pebble watches from class or participated in a workshop organized by Heeren. However, Dario Aranguiz, junior in Engineering, got his Pebble through a slightly different method than most students. He proposed an idea for an app through a Twitter campaign called #ifihadapebble.

He said that giving out Pebble watches to students for free was a very good idea to motivate students to utilize the skills they learned from classes and get ready for the real world. It is not difficult to develop an app for a Pebble, and students are more excited to work on it.

“Students have a hard time applying what they learned in the classroom out to other things,” he said. “There are some students who are better and students who don’t really get that drive. So if you hand them something for free and tell them to code, I feel like people are more enticed to do it.”

Aranguiz and three friends joined HackIllinois 2014 by building a WiFi-controlled microwave that can be used through an Android app called NextWAVE. The team linked this app to the Pebble to notify when the cooking is done. The Pebble has a convenient editor called CloudPebble, and it’s coded in C, which is a lower-level programming language.

“It’s actually really easy,” Aranguiz said. “I think the Pebble app itself took maybe like an hour to do.”

A few weeks before spring break, Nathan Handler, junior in Engineering, had a friend lend him a Pebble so he could learn to code for it. It took him 10 hours to make a CUMTD bus app that can locate nearby bus stops and find out which bus is approaching.

“I went from nothing to a functional CUMTD bus application,” Handler said.

Handler also created a HackIllinois watchface that had an event countdown, which shows a rocket ship animation when shaken. He also helped organize and lead two Pebble development workshops, where nearly 300 Pebbles were handed out, and taught people to develop a simple weather application.

Whether students are creating apps for Pebble, many people are wearing them daily. A good number of engineering students are interested in coding for it and have discussed their interests in the Illinois Codes Pebble Facebook group.

Although the Pebble Smart Watch is easy to acquire and work with, Google is coming out with a smart watch for Android called Android Wear. This new device will likely catch many people’s attention as well.

“To be fair, though, everybody has a Pebble, but not very many people have Android Wear,” Aranguiz said. “That you’ll probably have to pay for.”

Earn can be reached [email protected]