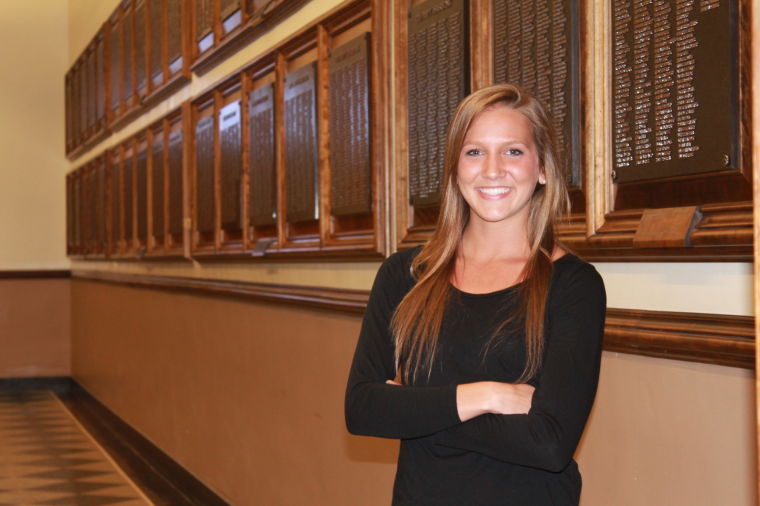 According to Ashley Robin, senior in Business, becoming a Bronze Tablet Scholar was pretty much expected of her by her parents. Since the start of her academic career, she has been a straight-A student.

Even with the rigorous curriculum Robin said she has gone through over the past four years, she has managed to achieve a 4.0 grade point average within the College of Business.

According to the main library’s website, the Bronze Tablet tradition started in 1925, recognizing sustained academic achievement by undergraduate students.

Every year, a new tablet is hung in the hallway on the first floor of the Main Library.

To be a Bronze Tablet scholar, according to the Student Code, you must have at least a 3.5 cumulative grade point average through the academic term before graduation and rank in the top three percentile of the graduating class.

Through the course of her college career, Robin said that she received her lowest grade in Freshman year: An A- in Calculus. Since then, however, she said she has received all A’s and A+’s for her final grades.

After being notified that she was a Bronze Tablet Scholar for the class of 2014, Robin said she was very honored to receive such a prestigious award.

“I was so excited that I posted it on Facebook immediately,” she said.

Robin found out about the Bronze Tablet her sophomore year from her sister, Nicole Robin, who graduated from the University in 2012 and who was .01 GPA points from receiving it herself. Robin said her sister stressed to her what an honor it would be to receive this award. Since then, she said she has worked even harder to ensure that she would obtain it.

Although school is a top priority for this scholar, it has not been her only obligation as a student at the University. Robin is also an active member of Kappa Delta sorority, where she served as the Girl Scout chair as a sophomore, and assistant philanthropy chair for their Shamrock week during both her junior and senior years.

Robin is also involved with Students Consulting for Non-profit Organizations, which is a registered student organization that assists non-profit organizations by providing free consulting services.

On top of being active in multiple organizations on campus, Robin was also a member of the 3Spot dance troupe, a dance performance RSO, for all four years on campus.

“3Spot was my outlet; I saw it as a hobby and not a commitment,” she said.

In addition to 3Spot, Robin said she uses exercise, running and the sauna daily to help relieve stress from her busy schedule.

Although the thought of keeping Robin’s schedule may seem overwhelming for other students, Robin’s friends say she is excellent at staying balanced.

“She does not get too obsessed with school, and family means a lot to her,” said Kaitlin Hayes, a senior in LAS and fellow sister in Kappa Delta.

For Gail Harmon, fellow business student, Robin provides an example of how to balance the many activities of college.

Robin said she believes self-motivation has been important in leading her to achieve her goals.

“Time management is key, and setting self goals are important. As long as I was happy with how my grades turned out, that was all that really mattered,” she said.

Robin said she would advise people who aspires to be a Bronze Tablet Scholar, to not compare grades to anyone else, and to be honest with the people around them about what responsibilities they can commit to.

After graduation, Robin plans on taking a break from academics. Since she didn’t get an opportunity to study abroad through the University, she will be backpacking in Europe for a month with a couple of her friends from high school. After returning home, she will be working for FTI Consulting, Inc. as a consultant in the financial and enterprise data analytics division.

Teryn can be reached at [email protected]