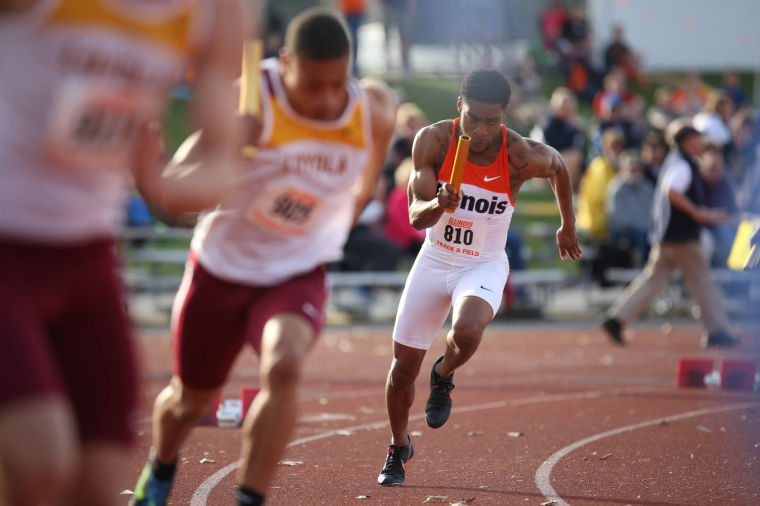 Illinois’ Julian Smith starts the 4×100 meter relay during the Illinois Twilight Track and Field meet at Illinois Soccer and Track Stadium on April 12.

Julian Smith, Brandon Stryganek, Stephon Pamilton, and DJ Zahn form one of the Illini track team’s most formidable forces: the 4×100 meter relay team. The squad currently stands at No. 7 in the country, and has been near the top of the rankings all season long. The 4×100 team is an event the program has been able to pride itself on; Illinois has reached the NCAA Finals in the event every year since 2010.

This foursome looks to continue that tradition. The same four runners, in the same order, have run in the relay since last year’s Drake Relays. Trust is integral to the event, with three blind hand-offs across 400 meters in less than 40 seconds. Last year, the 4×100 team had some early-season trouble trying to replace two graduated seniors. Now that the team is in their second year together, each of these four athletes knows his role and the group has come together to give Illinois one of the best 4×100’s in the country.

Head coach Mike Turk said Illinois’ 4×100 strategy over the years has been to get out fast. It’s no different this year, as the first two legs are loaded with the team’s top two 100-meter runners: Julian Smith and Brandon Stryganek.

Turk remarked that Smith brings more than speed to the starting line; his consistency is what defines his lead-off leg.

“We know exactly what we’ve got in that leg,” Turk said. “He’s just real steady in that first leg. He’s got a good start, he gets out well, runs the turn well, he’s just been a real calming steady influence leading that off.”

The team’s consistent, cool-headed starter didn’t join the relay under calm circumstances. According to Smith, it was “crazy.” He had been running the anchor leg last year until Vanier Joseph, then the lead-off leg, suffered an injury. So Smith was thrown into the starting leg.

“We just tried it one time and it was like perfect, it was like harmony,” Smith said. “We haven’t switched the team since.”

Smith didn’t always have the steadiness at the line that makes him such a strong starter these days. That came with experience.

“I try to lead by example, so I try to keep it calm so everybody else can keep a calm manner,” Smith said. “Being a senior, I’m definitely experienced to the point where it’s just kind of like; I’m going to run what I’m going to run.”

He also said that the continuity of racing with the same team every week has helped him to stay calm. It’s also helped the team improve as a unit.

The Illini want to get out fast, and they do that by running their best short-distance sprinter on the first straightaway. Junior Brandon Stryganek is Illinois’ top 100 meter runner. His mark of 10.29 seconds is the Illini’s best by 0.16 seconds. He has also been a member of the relay team since his freshman year.

Turk says he “inherited” the second spot and he’s stayed there his entire career. Two years ago, Stryganek and Zahn were members of an All-American 4×100 squad, along with national champion and Olympian Andrew Riley.

Last year, Stryganek and Zahn were the two holdovers on the relay as various runners were shuffled around them. Even while Zahn was moved around, Stryganek stayed at his position, trying to open up a gap early in the race.

Being on the relay for three years has garnered Stryganek valuable experience in the event and allowed him to deal with any surprises during the race.

Stryganek said that his strength from running the 200 meters as well as the 100 helps to power him through his leg.

“Running the backstretch is something I really enjoy. The straightaway’s a great place for me,” Stryganek said.  “All of us are in the right place we need to be. My goal is always try to get it to Stephon, make it easier for Stephon to bring it home.”

While two short distance specialists lead things off, the second half of the relay belongs to 400-meter specialists Pamilton and Zahn. Pamilton has dominated the Big Ten in the 400, winning the last three conference titles in the event: 2013 indoor and outdoor, and 2014 indoor. Not only is Pamilton a top 400-runner, he also currently is the Illini’s top 200 runner.

The curve is key in those two events, so it’s natural for Pamilton to run a key curve in the 4×100.

“I absolutely love running the curve. I have no real reason why besides I’m short,” Pamilton said.

Pamilton said running on the relay gives him a different mind-set that helps him to run faster in his other races.

While the relay provides a different mindset for Pamilton than his usual events, he also enjoys running it because it reminds him that he has some speed to go with his endurance.

That team, his team, is the supreme focus for Pamilton in the event. He said that he doesn’t really bring an individual strength to the relay, but rather the team is his strength.

“My strengths rely on my team, it’s all about the racing and how we fit as a unit,” Pamilton said. “It allows me to be everything the team needs me to be.”

DJ Zahn runs the Illini’s all-important anchor leg. 4×100 strategy dictates that your anchor doesn’t have to be the fastest runner on the relay, but he has to be one of the most competitive and he has to like chasing people down. Zahn fits the bill.

“He eats people up, he’s like Pac-man,” Turk said. “He’s really kind of been amazing in the anchor leg, and I thought he ran well as an anchor last year. He’s kind of taken everything this year to a higher level.”

Zahn said his teammates also talk about how he’s able to compete and close for the Illini on the final stretch.

“They’ll make jokes about how I eat people up at the end of races, and I don’t really plan on doing that all the time,” Zahn said. “Something just clicks and I’m there to make up a couple yards if I can in a race. It’s more instinctual.”

Turk highlighted Zahn’s anchor leg at Drake Relays on April 26 as a display of his competitiveness. The team had fallen behind and Zahn had to chase down Baylor and Arkansas, two of the country’s top 4×100 teams. He missed catching Arkansas by hundredths of a second and the Illini took third in their fastest race of the season.

“DJ has not got an open 100 meter time that would suggest he should run with a kid like the guy from Baylor,” Turk said of the Bears’ Trayvon Bromell. “There’s DJ right with him, step for step, and probably gained some ground on him.”

Zahn was a member of the All-American 4×100 squad with Stryganek two short years ago. Now, with two years together and the trust that comes along with that, this Illini squad is gearing up for similar success on the national stage. Zahn knows he’ll be able to keep closing things out for his teammates as the season heads towards a close.

“No matter where we are in the race, as long as they trust me to do what I can do, hopefully they can trust me to close up the gap on everybody,” Zahn said. “I can go out there and just make anything happen.”