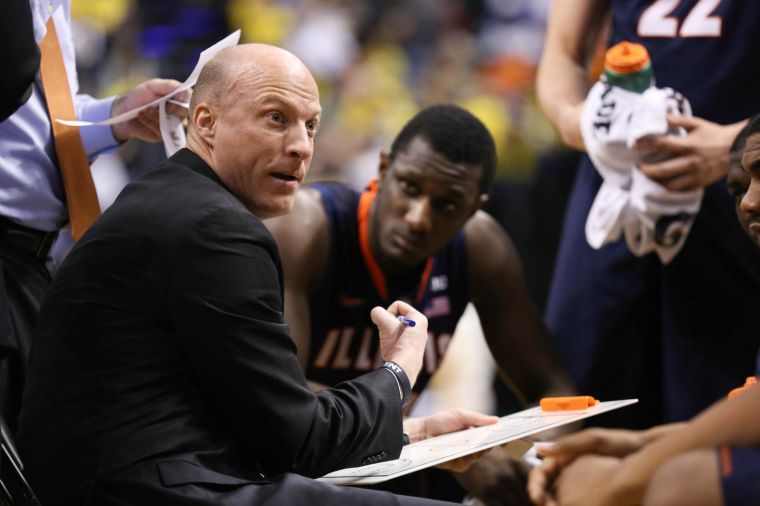 With renovations to State Farm Center still ongoing, the Illinois men’s basketball team will host the first-ever #ILLINIALLIN event. The event will take place at the Ubben Basketball Practice Facility on Sunday, Oct. 26, from 1-3:30 p.m. and will consist of an exclusive scrimmage only open to a select few Illini fans.

Oct. 1 — Transfer Ahmad Starks denied waiver by the NCAA to play the 2013-14 season. The guard from Oregon State who transferred to Illinois to be closer to his grandmother was told by the NCAA that he could not play this season, leaving Illinois with a hole at point guard behind starter Tracy Abrams. Fans at the time worried that Illinois would have one too many players on scholarship in 2014-15 if top prospect Cliff Alexander  committed.

Nov. 15 — Cliff Alexander and Quentin Snider spurn Illinois. No day affected the future of the program like Nov. 15. For a split second, Alexander picked up the Illinois ball cap, and it appeared one of the best prospects in the nation was going to be an Illini. Then he put down the cap in favor of one with a Kansas Jayhawks logo. Earlier that day, Snider, the top-ranked Illinois commit, reversed his decision and decided to go to Louisville.

Dec. 21 — Illinois beats Missouri to snap a four-year losing streak. The Illini beat Mizzou in the annual Braggin’ Rights game in St. Louis for the first time in five years. After the game, fifth-year senior Joseph Bertrand rubbed it in to former classmates Brandon Paul, Tyler Griffey and D.J. Richardson, who never beat the Tigers in their careers.

Dec. 31 — Illinois defeats Indiana to open Big Ten play. Rayvonte Rice (29 points) was outscored by Yogi Ferrell (30 points), but the Illini topped the Hoosiers in overtime. Freshman phenom Noah Vonleh had his way with the Illinois frontcourt but fouled out, and Illinois squeaked out a win.

Jan. 8 — Illinois falls to Wisconsin. Wisconsin defeats Illinois 95-70. The loss took came in the wake of Illinois breaking into the top 25 for the first and only time of the season, and was the first loss in an eight-game losing streak.

Jan. 12 — Illinois loses at Northwestern. The Illini lost 49-43 in Evanston, Illinois, and top-scorer Rice tweaked his hip, an injury that lingered for the month of January when his production decreased noticeably. Some saw this loss as the difference between the NCAA tournament and the National Invitation Tournament for the Illini.

Feb. 9 — Illinois beats Penn State. The Illini defeated the Nittany Lions 60-55 to end their eight-game losing streak. Illinois bounced back from there, going  5-3 over its final eight regular season games.

March 1 — Illinois upsets No. 18 Michigan State in East Lansing. The Illini won in East Lansing, Michigan, for the first time since Dee Brown wore an Illini uniform. Illinois would earn with the No. 9 seed in the Big Ten Tournament and defeat Indiana.

March 14 — Illinois loses to Michigan in the Big Ten Tournament. The Illini lost in the final seconds to the Big Ten champion Wolverines in what might have been the Illini’s best performance of the season. Ten days earlier, Illinois lost to Michigan by 31 points, 84-53.

March 23 — Clemson beats Illinois in the second round of the NIT. Illinois’ season ended at Clemson after the Illini were forced to play all of their postseason games on the road because of ongoing renovations at State Farm Center.