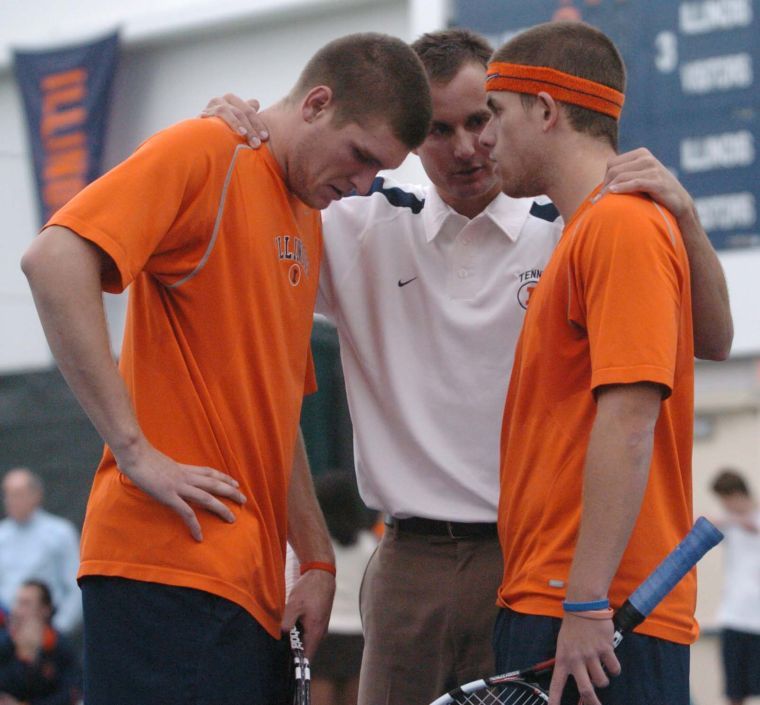 Entering his ninth season as the men’s tennis head coach at Illinois, Brad Dancer was standing firmly at the crossroads of high expectations and glaring questions.

His roster possessed no seniors, but he did have the reigning Big Ten Freshman of the Year, Jared Hiltzik, returning and Second-Team All Big Ten player Tim Kopinski was back as well.

This meant Dancer had some serious work to do to fortify the rest of his lineup if the Illini were going to reach the potential they believed they had.

This year could very well be Dancer’s most successful in terms of record, but also in terms of the impact he’s had as a coach.

The program had been waiting for junior Farris Gosea to exhibit his full potential ever since he arrived at Illinois. This season, Gosea earned Big Ten Player of the Year, and Dancer’s impact was one of the main reasons why.

“Coach Dancer has had a huge impact on my game, and in all aspects of my life. He’s helped me along the way. Even when I wasn’t playing well, he was still there for me and trying to guide me on the right way,” Gosea said.

Gosea’s progression was huge for Dancer and his team this season, but became even more important when Hiltzik missed almost six weeks due to injury. Brian Page was also out during Hiltzik’s absence, so Dancer only had six players to work with.

Only having six players at his disposal made lineup switches a nightmare, but Dancer still led the Illini to only one loss in the time Hiltzik and Page were out.

Dancer consistently talks about the faith he has in his players, and that was more obvious than any other time in that stretch of the season.

“I think we have good enough players that if we just go out and play we should be able to win matches,” Dancer said at the time.

When Hiltzik returned from injury, Dancer saved the day once again.

Hiltzik would continually cite Dancer week-in and week-out as he worked back into his top level playing form. Hiltzik mentioned multiple film sessions, where between the two they were able to get Hiltzik back into his style of play and get his consistency back.

Dancer’s message to the team throughout the season has been simple and consistent.

“(Dancer) get us really prepared each time we have a match and he gets us focused on what we need to be focused on, individually,” Gosea said. “I know that’s really important, having individual goals for each person, not just having a whole team thing. I think he cares a lot about each one of us individually, so that’s the most important thing.”

Dancer led the Illini to a 22-8 regular season record, and yet another appearance in the Big Ten Tournament championship match.

Although this year could already be considered Dancer’s best in his nine years with Illinois, there’s one factor that will define how the season is remembered.

Dancer and the Illini have had the goal of winning a national championship all season and haven’t shied away from it at all.

So, the team’s national title pursuit will define how the 2013-2014 season is remembered by those outside the program, but  either way Dancer’s fingerprint has been left all over this year’s team.

“I’ve enjoyed this group of guys thoroughly,” Dancer said. “They get excited about tennis, they love tennis, they play with a lot of passion and a lot of heart, they’re tough kids. So that makes my job really fun. There’s always challenges that sometimes you expect or don’t expect as a coach to creep up but, for the most part, it’s been a joyous group and really fun to watch these guys grow throughout the year.”